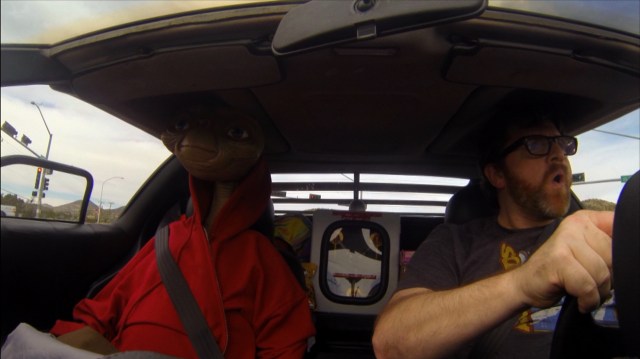 Ready Player One author Ernest Cline and E.T. in a Delorian, for reasons.

TMS: Last I heard, you recently finished the script for Ready Player One. What was it like working with Ernest Cline like during that process?

Penn: Well, what was interesting was that it was somewhat of a coincidence. I was approached for writing the adaptation of it—I think I said “sure, I’m interested,” then then there’s always, you know, a lot of back and forth between agents and studio and I wasn’t sure it was going to happen. And then the next thing I knew, I’d agreed to direct this documentary and was referred to Ernie as a person to talk to for the documentary. So I ended up meeting Ernie and spending a bunch of time with him and talking with him before I was officially hired to write the script. Then when I was hired to write it, I was literally in the trenches. I mean, we were standing in a garbade dump for a number of days together, talking about his book. Which is really—you don’t often in Hollywood get the opportunity when you’re adapting someone’s work to hang around with him with a different purpose, you know? Which almost made it better because I hadn’t started writing yet, so we can just talk in general about the idea and the possibilities.

So I think it was incredibly helpful to me. When [Atari: Game Over] ended, I basically had to immediately start writing the draft because they’d been waiting on me and the movie took longer than it was supposed to. So I think being dipped into this nostalgia that was this Atari documentary for six months, including hangin’ out with Ernie and talking to him a lot and interviewing him, the script was just incredibly fun to write and came out pretty easily. It also allowed me to run stuff by Ernie because there’s always changes you have to make for an adaption. You know, there’s things you inherently have to find a way to adapt.

TMS: Right, I imagine getting the rights to everything is going to be tough.

Penn: Well that—by the way, the rights stuff—everybody knows, including Ernie, that even my script is just a blueprint. Who knows what we’ll get the rights to or what we won’t, you know. I always say to writing classes, people make the mistake of thinking they’re writing the screenplay and that‘s the movie. It’s not only not the movie, it’s the advertisement for the script that will become the blueprint for the movie. You have to write a script that convinces everyone that it’s worth making this movie, regardless of what the realities of making the movie are. I can’t go to the rights holders and ask them if I can get the rights. It doesn’t work that way. So you kind of take some chances and hope that you get ’em.

But there’s even more fundamental things than that, just in terms of how you’re going to represent something that’s kind of inherently internal in the book. You can’t show people reading, you know. You can’t show Halliday’s journal, that’s something Ernie and I talked about early on. What I would say is, it’s really helpful to have the author there and to know that you built some sense of trust with them. And Ernie is like this, he’s also a screenwriter so he knows what he’s doing, but it made it so much easier as things cam up and be able to call up and say, “is this thing gonna drive you crazy or is i consistent with your world?”

Sometimes, there were a couple of things I pitched Ernie that made it into the script where I was like, “what about this, this and this,” and he’s like, “That’s so funny, turn to page 220,” and there’ll be like some very short reference to something, and he’s like “That’s exactly what it was an I never wrote it into the book.” I’ll pitch him a planet or something and he’ll be like “Yep, that planet exists in my universe, it’s just not in the book.”

TMS: There’s a scene in the documentary with Ernest Cline having his own mini road trip. Is that just what his life is like?

Penn: It is! In fact, we had to send a splinter crew because I was shooting in Almagordo, my producer Jonathan went up to Santa Fe to pick up the stuff of Ernie and George R.R. Martin. All that is just—when Ernie told me that, “yeah, I’m gonna be there, I just have to go pick up my Delorian from George R.R. Martin…” I was like, “what? Wait, don’t tell me—I gotta get this on camera.” I kind of thought he was putting me on. It took me a while to figure out—why does George R.R. Martin have your Delorian? And he said it like I would say, “Oh, I leant my tennis racket to my friend.” 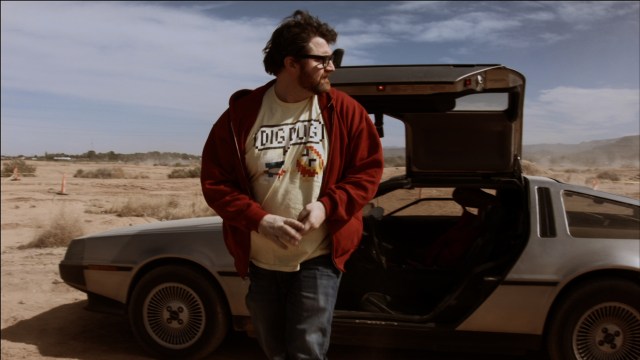 TMS: Finally, our readers would kill me if I didn’t ask about Pacific Rim 2.

Penn:  It’s going well. Guillermo [del Toro] and I have been passing the script back and forth and right now it’s in his hands. And here’s the other thing I’ve learned about working with Guillermo: every once in a while I’ll turn on my computer or open the newspaper and there’ll be some tidbit that Guillermo has told everyone about what we’re doing. So I feel like it’s not my place [to talk] ‘cuz he’s the one who’s gonna tease what he’s gonna tease. I’m also kind of surprised when he does it. I like it, but I also find it frustrating—you shouldn’t give away the movie, but we’re not making Se7en where if you know the end it blows it. It’s not like we can’t talk about it at all.

But honestly, I don’t think I could tell you anything that Guillermo hasn’t already said. Obviously as you can imagine, there’s going to be a lot more about the Kaiju and their origins, and the world will be in a very different state when we get to this movie. He and Travis created this enormous universe that’s pretty much like multiple movies smashes into one. So with Pacific Rim, you could just assume that all the specific tropes of the movie, like the giant robots and the giant monsters and all the technology around it, is going o be explored in more depth. That’s just where we’re going. But I’m not going to tell you the story cuz that would just ruin it.

TMS: Yeah, it always seems like Guillermo is always announcing some new project that he’s working on.

Penn: Guillermo is more ambitious than I can imagine. I think I have a pretty big imagination, but every time I say “Oh, we could do this,” he says, “Oh yeah, we that in the third movie that I’m planning.”

You know what? Here’s what I’ll tell your readers, here’s something I can say: I was privy to the animated series that he’s working on. He asked me to read through some of it, which, to his credit, he was like, “I want you to know everything that’s happening in this universe because I want you to stick to it.” Just like what you have to do with Marvel—with Marvel, writing the first draft of Avengers, I had to know what was going on in every single other movie. And in this one, he’s got some amazing stuff that’s in the animated series that definitely informs what’s going on in the next movie. So he’s done a lot of work already and there’s less margin for error on my part.

Atari: Game Over will be available on Google Play, iTunes, Vimeo, as well as Amazon Instant Video, Wuaki, and Blinkbox in the UK, and Fetch in France and Japan. It can also be viewed for free with an XBox live account. Thanks to Zak Penn for taking the time to speak with us!