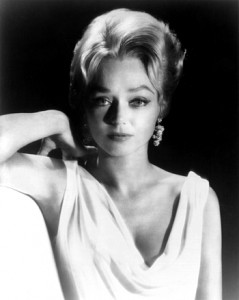 Yvette Vickers intended to become a journalist when she began attending UCLA in the late forties, but decided that she enjoyed acting more. Her first film role was an uncredited appearance in, of all things, Sunset Boulevard, but she’s known primarily as the star of movies like Attack of the 50 Foot Woman (she was not the 50 foot woman) and Attack of the Giant Leeches, the latter of which has the incredible honor of being the subject of an episode of Mystery Science Theater 3000.

What is most likely her body was found last week in her Los Angeles home, after having lain undiscovered for months or a year, according to the coroner.

It’s a story that seems right out of the movies that Vickers appeared in. From the Associated Press:

Neighbor Susan Savage told the Los Angeles Times she saw letters and cobwebs in Vickers’ mailbox before going into the house and discovering the body upstairs in a room with a small space heater in the “on” position.

“The letters seemed untouched and were starting to yellow,” Savage said. “I just had a bad feeling.”

Vickers was either 82 or 74, depending on conflicting reports (Wikipedia says 82), and according to her neighbor she was independent and kept to herself but “had friends.”