Popular YouTubers Have Children Taken Away After Abusive Videos 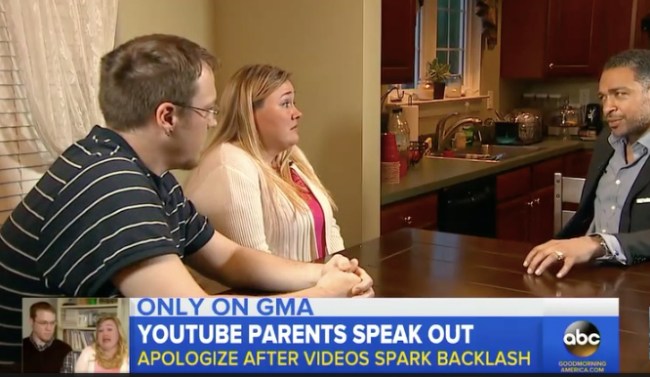 Mike and Heather Martin temporarily lost custody of two of their five children for the cruel “pranks” they played in a series of now-deleted YouTube videos that earned the couple a lot of money. The loss of custody should be permanent.

On their channel, “DaddyOFive,” the Martins engaged in “pranks” that they insisted the kids were in on—if activities like yelling at sobbing children can be termed as “pranks.” The channel amassed 760,000+ subscribers, and concerns had long been voiced about the children’s wellbeing. But it wasn’t until other YouTube stars began to publicly question the Martins that real-world actions were taken.

Engadget breaks down the series of events, which should stand as a stark lesson that what we do online matters IRL—especially when what you’re doing online is posting evidence that you’re an abusive pair of criminals.

After prominent YouTuber Philip DeFranco looked into the Martins’ channel and brought attention to it with a video of his own, things began to unravel for the Martins. Rose Hall, the biological mother to two of the children (Cody and Emma) began leaving comments on the Martins’ videos and after another YouTuber created a GoFundMe page to help with legal costs, Hall was granted temporary emergency custody of the pair last Friday.

Never having viewed the Martins’ videos in the past (which they have removed and replaced with a tear-laden apology), when I first saw the story, I wondered if this was a situation where the reactionary Internet mob was, well, overreacting. So I asked my friend Marlene Bonnelly, an established YouTuber, for her take. Here’s Marlene’s account:

I watched the videos because I’m a masochist. The biggest issue is that they picked on the youngest, smallest and most sensitive son, Cody, who VERY CLEARLY (by their own words) had issues (social/learning/what have you) that needed to be addressed.

The mother pranked him by putting ink all over the kid’s carpet and then blaming him for it. She SCREAMED at him, full on meltdown cursing until he shrank to the floor crying and having a breakdown. And then laughed in his face.

The father would encourage his kids to hit each other, pushed Cody so that his face slammed into a shelf (and you later see him with what looks like a bloody nose), would violently break his toys (like a tablet he loved) and then be like “hahaha don’t worry we can buy you a new one with YouTube money!”

These kids, but especially Cody, were gaslighted to the extreme. There was a point where this poor child smeared feces all over the bathroom in a fit, which child psychologists say is a textbook sign of emotional trauma.

The next week the entire family went to Disney, and they DIDN’T BRING HIM because they said he couldn’t behave.

Everyone went except for him.

These “parents” are full of shit. When they first started getting in hot water, they called everyone against them “haters” and had their kids go on camera as saying “we’re fine with the pranks. At least you don’t beat us like some parents.”

WHAT KID SAYS THAT?

They were brainwashed. Of course no child is going to go against his parents’ will, especially if it involves their main source of income. You don’t want to be the one member of the family who speaks out and has everyone turn against you even more.

When the parents realized they couldn’t get away with it anymore, they issued another statement claiming that the kids were in on the pranks and it was mostly fake reactions. Everyone called bullshit, including an actual news anchor that interviewed them in studio. The anchor was so visibly furious.

They made videos where the mom was wailing crying and asking for comfort from her children because they were being “attacked” online. Fakest shit I’ve ever seen. Where was she when her children were traumatized and needed comfort?

Finally, more recently, they privatized all their videos except for their apology, which they hired a PR firm to help them with.

Needless to say, after hearing from Marlene, I was also furious and felt that for once, the Internet mob had done a good deed. You can watch the Good Morning America segment that Marlene mentioned here. The Martins reek of disingenuous repentance and seem to admit that the kids were not always “in on it.” The reporter does an excellent job of calling them on their bullshit—and the bits of “DaddyOFive” videos that we see are extremely disturbing.

DeFranco’s video, which shows the “ink prank,” is horrific to watch. The kids do not look, at all, “in on it.” And the screaming, cursing parents would not be funny even if the whole thing was being filmed on a movie set with professional actors.

I asked Marlene to help me estimate how much money the Martins had been making from their channel. Based on her own statistics and earnings from YouTube, she thought that with their hundreds of thousands of subscribers and millions of hits, the Martins were making at least $11,000 a month, which is quite the reward for being terrible people. I hope they lose their forthcoming legal battles, and I worry for the children still in their custody.

The Martins’ comeuppance should give pause to other exploitative people who would think to use their children for fame and fortune. YouTube should not be complicit in allowing this kind of content to pass for entertainment, and the videos’ longtime viewers, who found this sort of behavior hilarious for months, need to take a long step back and look at their lives and choices.

“The more upsetting the video, the more popular it was,” the GMA anchors observe. However awfully the videos reflect on the Martins, they’re also a damning mirror for the rest of us.