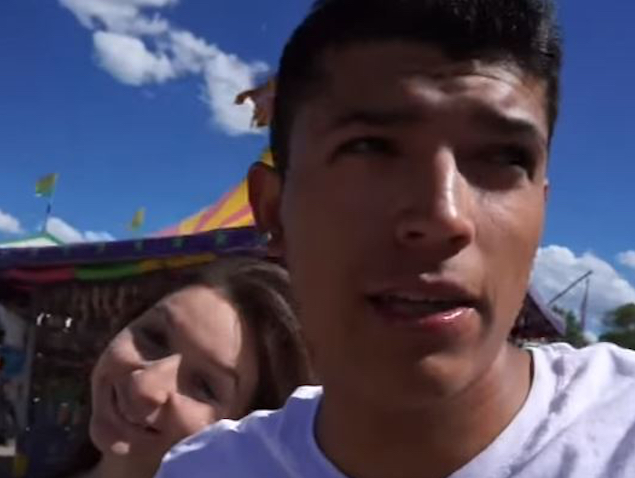 The story of what happened to Pedro Ruiz III and Monalisa Perez is difficult to read. The young couple, who lived in Minnesota with their 3-year-old daughter, sought Internet fame at seemingly any cost. Ruiz paid with his life—and Perez is charged with second-degree manslaughter, after she was convinced to shoot her boyfriend point-blank in the pursuit of “more viewers.”

Every single element of this event is just awful, tragic, and all the sadder in that it was completely preventable. Per The Washington Post‘s account, Ruiz had long wanted to film a stunt for YouTube that would see him survive being shot. The set-up would be that Perez would shoot him, and the bullet would be stopped by an encyclopedia-thick book that Ruiz held up like a shield. He imagined that attention, fans, and clicks would come thereafter. And he spent a considerable amount of time persuading his girlfriend to participate. As the Post reports:

Monday evening, the young couple positioned two cameras outside their home and prepared for their breakthrough stunt. They wanted fame, family said, and danger often brings it.

“Me and Pedro are probably going to shoot one of the most dangerous videos ever,” Perez teased in a tweet at 5 p.m. “HIS idea not MINE.”

Prior to this undertaking, the couple had specialized to broadcasting minor pranks:

“…doughnuts with baby powder instead of powdered sugar, feigning paralysis from a grocery store wheelchair, hiding hot peppers on an egg salad sandwich. Just this week, Perez posted a video of Ruiz doing a handstand inside a rotating fun house tunnel at the county fair.

But the bullet and book stunt was supposed to be their moment.

“I said, ‘Don’t do it, don’t do it,’ ” Ruiz’s aunt, Claudia Ruiz, told her nephew when he shared his idea, according to Valley News Live. “Why are you going to use a gun? Why?”

His response, she said, was simple: “Because, we want more viewers.”

Perez fired from a foot away, using a Desert Eagle .50-caliber pistol, an incredibly powerful semiautomatic handgun. The shot went straight through the book and entered Ruiz’s chest. Efforts by emergency medics to revive him were unsuccessful, and he was declared dead at their house. Perez, who is 19 and currently pregnant with the couple’s second child, was initially charged with reckless discharge of firearm. That charge has since been upgraded to second-degree manslaughter. She could face up to ten years in prison if convicted.

There’s nothing here that isn’t terrible. By all accounts, this was a young pair of parents who were very much in love. Two lives have been ruined—Ruiz’s lost, Perez facing criminal charges and having to live with the sheer horror of what her actions resulted in—and their children’s world will be irrevocably altered. Have we reached the point where the lure of Internet fame is so great that a couple would risk everything for a badly planned stunt that they believed could be their golden ticket? “Imagine when we have 300,000 subscribers,” Perez says in the last video the couple filmed together, which showed them frolicking at the country fair.

I would like to think that once the case is examined in court, any judge and jury with a soul won’t punish Perez with jailtime—but I don’t know how much faith I have in our criminal justice system. Pedro Ruiz’s aunts are supporting her and agree that Perez shouldn’t suffer further retribution. Lisa Primeau, who helped raise the young Ruiz, told the Minneapolis Star Tribune: “It’s a tragic incident. What she did … she has to live with that. It’s the worst punishment she can get.”