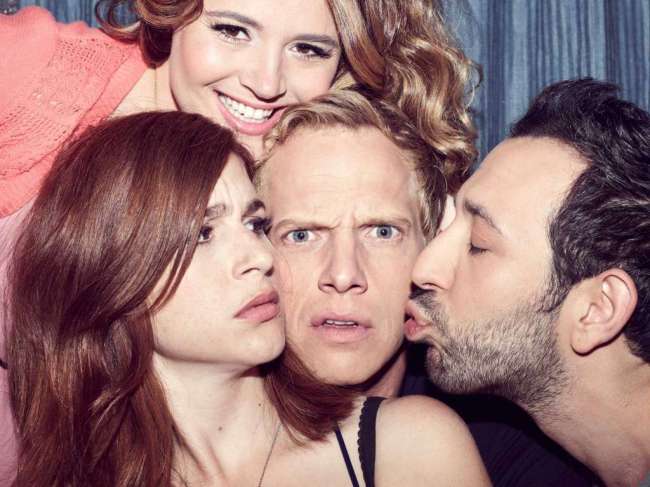 FXX’s comedy You’re the Worst is one of my favorite shows. Like Bojack Horseman, it’s a narcissistic comedy on its face, but it actually delves deep into some pretty serious stuff with humor and a surprising amount of emotion. It also gets right to the heart of what it feels like to live in Los Angeles. Here are five reasons why you should check out You’re the Worst if you haven’t already.

Sure, the show is ostensibly a romantic comedy about the relationship between Gretchen (Aya Cash) and Jimmy (Chris Geere), but what makes the show sing are the way that relationship can be juxtaposed with the other relationships in their lives. Gretchen and Lindsay (Kether Donohue) have been best friends forever, but that doesn’t mean this is a cookie-cutter, Lifetime movie friendship. They’ve always drunk together, done drugs together, partied together, and encouraged each other in their debaucherous sexual exploits. And when they’re pissed at each other, they tell it like it is, straight-up, calling each other every name in the book. Sometimes slapping each other if necessary:

But at the heart of it all is real love. Their friendship is complicated. They’re the kind of people who, if you met them in real life, you might be tempted to say “Why are they even friends?” Yet as you get to know them on You’re the Worst, it’s clear why. They are the same in their fucked-upedness, whether they individually want to admit it or not, and while they probably each see the other one as “the one with the real problems,” no one would understand them better than each other. They need each other. And they have hella fun together, too.

But it’s not just their relationship that’s worth watching. Lindsay’s competitive relationship with her sister Becca (Janet Varney) rings really true as well. The series begins when Becca, who is Jimmy’s ex, invites him to her wedding to rub it in his face that she’s moved on. It’s there where Jimmy meets Gretchen, and the story takes off. But from the moment we meet Vernon (Todd Robert Anderson), the questionable plastic surgeon Becca has married, we see that all is not well, despite the perfect picture she’s trying to paint. Meanwhile, Lindsay has married a guy named Paul (Allan McLeod), a well-meaning nerd that she can barely stand. The more each sister’s life falls apart, the harder each tries to prove to the other how great their life is. By Season 2, we start to see the relationship mellow…a little. The ups and downs are very real. 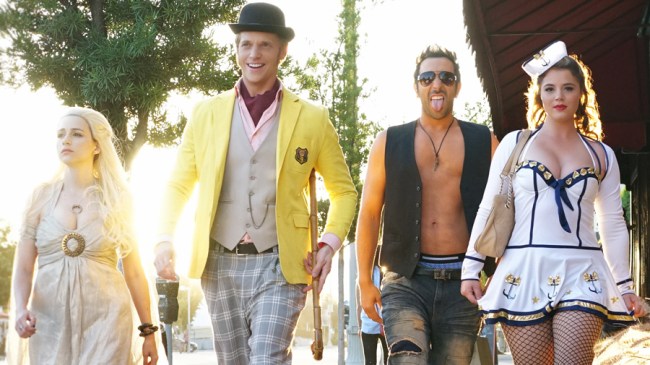 TWO. The Respectful, Honest, and Accurate Portrayal of Living With Mental Illness.

Both Gretchen and Edgar (Desmin Borges) have had storylines that deal with mental illness. What really sets them apart is that, unlike other shows, where mental illness might be addressed in a Very Special Episode, or maybe a multi-episode story arc, You’re the Worst shows these two characters dealing with their mental illness as part of their lives. It isn’t something that goes away over the course of a couple of episodes. It’s a part of the character that they deal with and manage every single day.

While the signs were very much there from the beginning of the show, it was in Season 2 that Gretchen’s mental health history came out, and she admitted that she had moments where she suddenly “doesn’t feel anything.” The photo above, from the show’s Halloween “Sunday Funday” episode, takes place when a determined Jimmy is determined to fun the depression out of Gretchen. It isn’t long, however, before he realizes that that’s not how depression works. It’s not something that you can talk somebody out of. Since then, the show has explored Gretchen taking medication, and seeing a therapist (Samira Wiley) without losing the character’s trademark pessimism and edge. Cash’s performance is amazing, as she deftly balances Gretchen’s defense mechanisms and her knowledge deep-down that she needs help.

Meanwhile Edgar, a Latino vet who served in Afghanistan, is suffering from PTSD. This, too, has been an element of the story since the beginning of the show, but the writers expertly built it up to a breaking point in Season 3, and in one of that season’s most heartbreaking episodes, we see Edgar—who is usually everyone’s cheerleader—experience the story of the previous episode from his point of view. It’s terrifying and so sad to watch how Edgar interprets everyday activities through the lens of his condition, and to realize that this loveable, seemingly enthusiastic person is carrying around all this pain that too few people seem to care about. Borges, too, gives a beautiful performance, made all the more important by the fact that, too often communities of color don’t acknowledge mental illness, especially in men, thinking it “white people problems.” Borges’ Edgar gives sympathetic voice to those Latinx out there who need help, and who find the courage to get it. 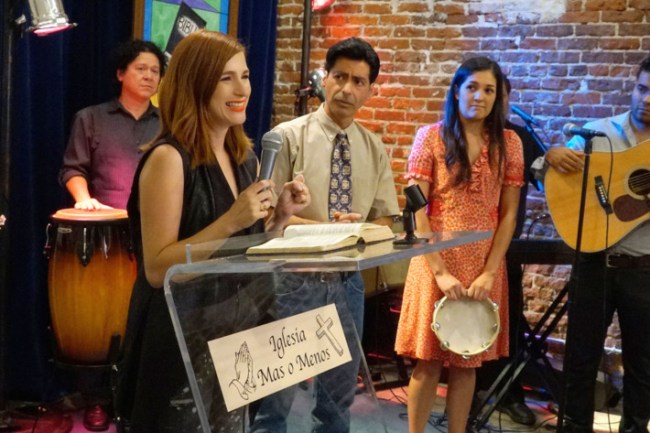 THREE. L.A. Is Not a White City

In addition to Borges being a part of the main cast, the show captures the fact that, while we’re following two very white protagonists, the city in which they live is the furthest thing from white, and we see that all the time—from guest stars like Gretchen’s musician clients, or her therapist, to the people with whom they interact in the city. Something this show gets really right that a lot of shows don’t is populate the background with exactly whom you’d see if going out and about.

Take the time when, in a fit of desperation to get an audience to a client’s “secret concert,” she goes to a Latinx church and, in fluent Spanish, convinces them to follow her to the concert for free food. Jimmy, having never known before then that she speaks Spanish comments on it with surprise, to which she replies, “This is L.A. Everyone speaks Spanish.” Then Jimmy says, “I don’t! Edgar doesn’t.”

And that’s the other thing. Edgar, who actually is Latino, doesn’t speak Spanish, and that’s a running thing throughout the show. He totally represents the many Latinx out there who feel a connection to the culture without a facility with the language. I can’t say I don’t relate. I speak Spanish, but not as fluently as I’d like.

While I wish there were more recurring/major characters of color, I appreciate the fact that the L.A. they present on the show feels very much like the L.A. I live in. 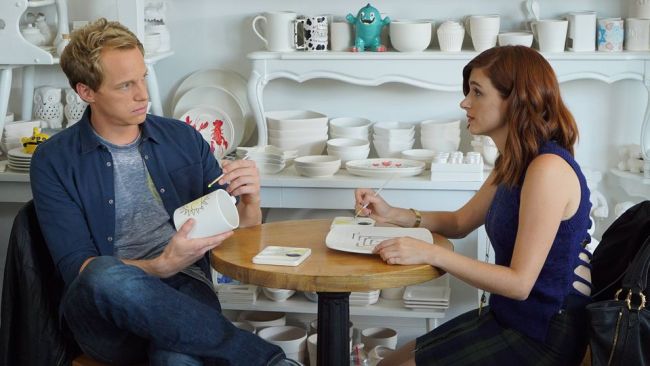 One of the other ways in which the show deals with the importance of mental health is in Season 3, when Jimmy has to deal with the loss of his father. On the surface, he’s not sad at all. He and his father always had a combative relationship (the family nickname for Jimmy was ‘Shitty Jimmy’ for reasons that I’ll let you imagine), and so when he hears about his father being dead, his initial response is to be thrilled and feel free. Or to respond with sarcasm, as is his way with everything.

However, as Gretchen (begrudgingly) learns from her therapist (and really only tells Jimmy so that he can process his emotions before a cruise they’ve purchased tickets for), grieving is a long process, and needs to be dealt with in a person’s own time, not rushed or buried. Eventually, Jimmy does deal with it. Not in a saccharine way, but in a way where he’s processing his real feelings about his father, rather than the stories he’s told himself about his father.

You’re the Worst shows us that everyone could stand to care for their mental health, not just the mentally ill. 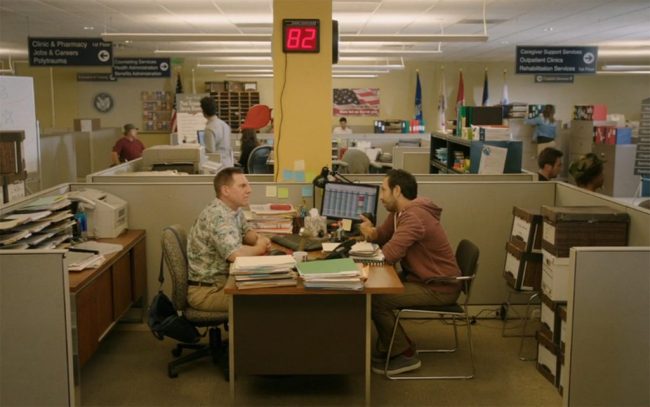 FIVE. As Much As We Talk About ‘Supporting Our Troops,’ Vets Get Treated Like Garbage.

Something else that Edgar’s PTSD storyline allows the show to explore is the amount of red tape and nonsense veterans have to go through to have their needs met through the U.S. Department of Veterans’ Affairs, or the V.A. When Edgar finally finds it within himself to seek help, he’s thwarted at every turn by bureaucracy. It takes him months each time he wants to talk to a living human at the V.A, and when he finally gets to see someone, he’s given a million reasons why they can’t give him what he needs.

It speaks to a lack of resources the V.A. gets from the government to deal with the men and women who serve once their home, which is particularly heartbreaking, considering the fact that the U.S. has one of, if not the largest military budget in the world. We can find all the money we need to send people to war, but no money to care for the ones that make it home? That’s some fucked up shit right there. 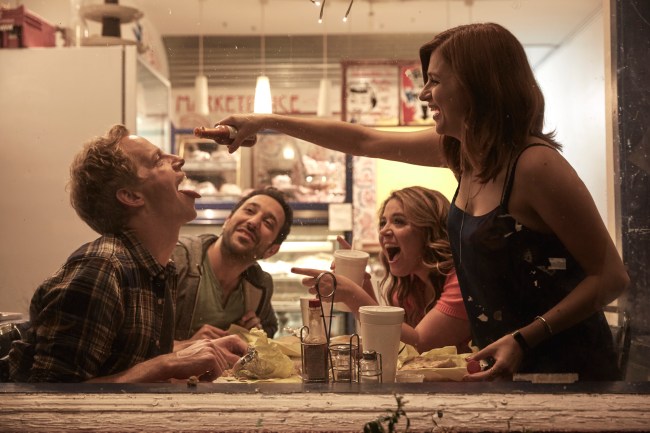 It’s pretty amazing when a show can be hilariously funny while also getting into real issues, keeping their characters grounded while letting them be completely off-the-wall. The balance that this cast and these writers manage to strike with every episode is amazing.

You’re the Worst‘s fourth season premieres September 6th on FXX. If you haven’t yet watched the show, do yourself a favor and get thee to Hulu so you can catch up. Seasons 1-3 are available for streaming there. This may just be one of the best shows you’re not watching.