Hey, I get to use my favorite Sandman top pic!

Many fans of the series were worried last week, when Warner Bros. Pictures announced their slate of upcoming films set in the DC Comics universe had nary a mention of the previously announced film based on Neil Gaiman’s Sandman series. Well we can all take a deep breath, thanks to a word from Gaiman himself on Tumblr: 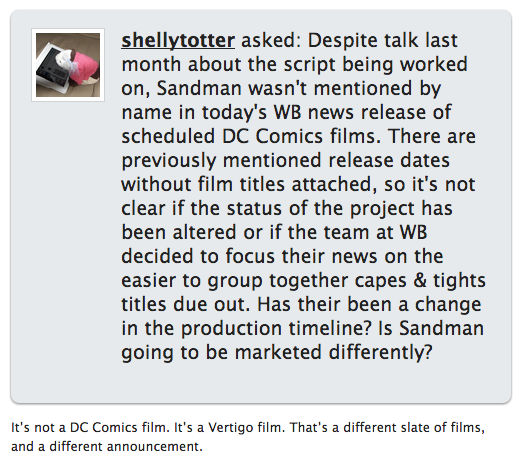 There you have it, folks. Yes, Sandman is classically set within the DC Universe, and various superheroes do make cameos, but the books were incorporated into DC’s Vertigo vertical, and as such are not grouped with the rest of the DC-based films. Now we can stop worrying about whether the film was dropped, and go back to worrying about whether it’ll wind up being good. In other Vertigo news, DC Comics co-publisher Jim Lee says that the vertical is due for a facelift and a rebrand, and that 2015 will have lots of exciting things in store for it.