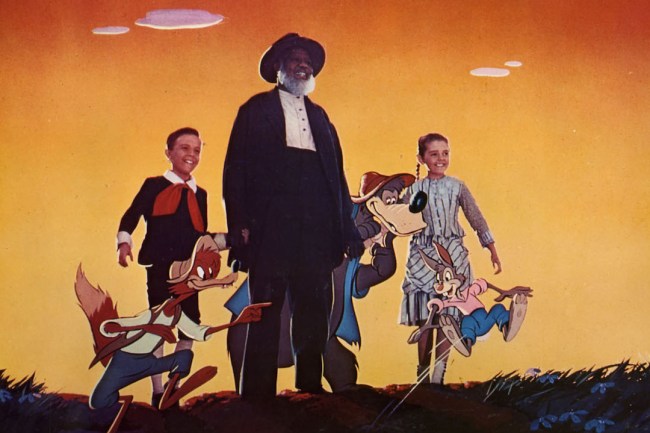 Disney+ dropped last week and with it one of the most extensive and impressive collections of vintage films on any streaming platform. Sure, Infinity War is there, but so is Fun and Fancy Free and Bedknobs and Broomsticks. There’s a huge amount of content from the Disney vault all the way back to Snow White but there’s one film that you won’t see on the platform now, and never will see in the future: Song of the South.

We’re glad that Disney is keeping this film in the vault, because no disclaimer could save it, but we’re also glad that one of our favorite podcasts, Karina Longworth’s You Must Remember This is keeping the film and its racism, both overt and subtextual, in the conversation with the new series “Six Degrees of Song of The South.” Longworth is a premiere voice in film history and the new series is both fascinating and enlightening. It’s everything we love about You Must Remember This: history, empathy, curiosity, and insight, delivered with just a hint of irreverence and perfect diction in Longworth’s sonorous alto.

If you haven’t heard of Song of The South, I can’t blame you. The film, which tells the story of some white kids on plantation learning some life lessons as they listen to happy (former?) slave “Uncle Remus” and frolic with animated creatures was released in 1946, then re-released into theaters several time, most recently in 1986. It’s never been released on home video in the US and the only trace the film has left on the Disney brand is the song “Zip-A-Dee-Doo-Dah” and the use of the characters and music in the theme park ride Splash Mountain.

Why has Song of the South been hidden away? Because it’s embarrassingly and uncomfortably racist.

With origins in minstrelry, cultural appropriation, and post-civil war reconstruction, Song of the South was problematic from the start, but it was part of a much bigger and more complex Hollywood narrative involving race, Disney, communism and more; which is what makes Longworth’s deep dive into the movie so interesting. We learn that, rather than being a “product of it’s time,” Song of the South was protested from the beginning. Its makers knew it’s retrograde portrayal of happy ex-slaves (though the era of the film is ambiguous) choosing to stay with their former owners and devote themselves to amusing white children.

Longworth delicately and deftly tackles different issues in each episodes. She explored the origins of the film, all the way back to the creation of Uncle Remus and other characters in the work of Joel Chandler Harris. Next, Longworth examined the life of Hattie McDaniel, the first Black actor to win an oscar and how her success was a double edged sword that led her to taking a thankless, stereotypical role in Song of the South.

The third episode of the series was perhaps the most fascinating to me. It explored the somewhat mysterious origins of “Zip-A-Dee-Doo-Dah” and the influence of minstrels shows (and the black face that was usually part of those shows) on American film and culture. Despite Longworth’s research prowess, there’s little to no record of the writing of the iconic song that went on to earn an Oscar. But it does echo an old minstrel show tune, as do many familiar elements in the Disney canon.

Another fascinating aspect of the film is explored in the fourth episode. When face with criticism of the film before it even started production, saunch anti-communist Walt Disney hired, not a black person but a Jewish man and a known communist to punch up the screen play.That man, Maurcie Rapf, couldn’t fix Song of the South but he did sneak in some pro-worker sentiment into his only other Disney credit before he was blacklisted – Cinderella.

I’m excited to listen to the rest of the series, especially the promised episode about the only remaining vestige of Song of the South that the public has easy access to: Splash Mountain. I’ve wondered for years if Disney would ever update the ride or if it’s too beloved as it is. It’s not unheard of for Disneyland rides to exist without connection to an existing IP, but it’s becoming more rare. I’ve often wondered if Zootopia was specifically conceived with a fox and bunny that look a lot like B’rer Rabbit and B’rer Fox in order to give the parks the option for characters that could be an easy overlay.

If you’re interested in a fair and fascinating look at the most infamous film in Disney history, or if you just want to dive into more of the secret and/or forgotten tales of Hollywood’s first century, you can’t do better than You Must Remember This. Longworth is a master of the podcast form and we’re happy she’s back from hiatus and excited for the next corner of Hollywood history she might turn her attention to.