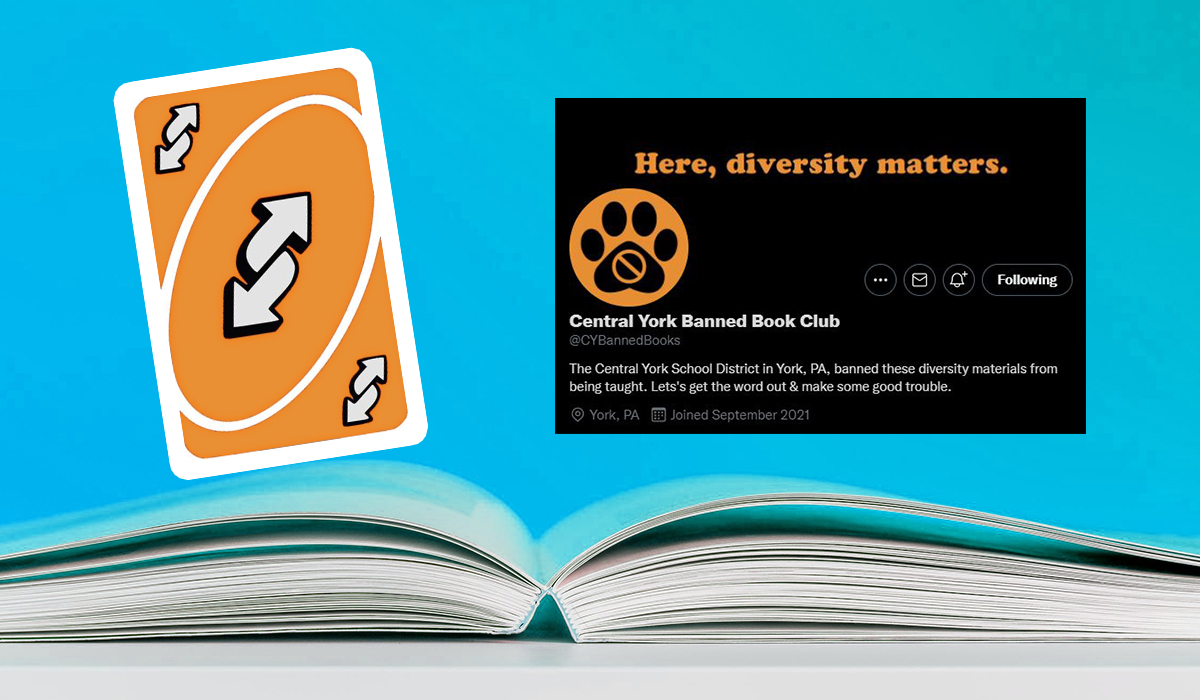 Upon hearing that their all-white school board banned books and educational materials almost exclusively by or about people of color, Central York High School students protested for weeks. Led by student activist Edha Gupta, the work by the Panther Anti-Racist Union (student organization) gathered support from across the country, including many authors on the list, Bernice King (several MLK books were banned), the ACLU, PEN America, and more.

Capitalizing on this attention, some created a Central York Banned Book Club Twitter. There, they highlighted some books banned, promoted a ban-reversal petition, and rallied people to join them for their larger September 20 protest (set right before the school board would meet again).

A few hours after that last big protest (that gathered about 200 people), the board “released the list until this review process can be coordinated with [their] incoming superintendent.”

Quite a good turnout pic.twitter.com/WBK916eRkE

Before motioning to reverse the ban on materials on the list, the school board defended the original “freeze” (ban) and apologized that it took so long to review the materials. While it is great that they acknowledge the way they dragged their feet on course correction of racism and homophobia, it is not a great look to act like those materials could have been a threat to begin with. For one, books are vetted by educators and librarians before they are added to collections.

Something to note is that they are not done “reviewing” this list. Like the original ban supposedly was, this decision is temporary, and the language used, such as “both sides” and “indoctrination,” hints that this fight is not over, even for this particular district. The school board would rather play “we were just looking out for the kids,” even though some of the items supposedly in need of review were just biographies of people like Rosa Parks, a Sesame Street special, and book lists with protagonists of color.

Nevertheless, this is still a time to celebrate as a win for diversity—a word many high profile conservative voices are calling coded language for anti-white.

Please join me in giving a standing ovation to these students who reversed this racist book ban (which included #Sulwe) in their school district. Sending gratitude for your time and energy organizing this effort, and deep respect for your mission accomplished! 🙌🏿 @CYBannedBooks https://t.co/YGkn9p2HiJ

Even since the four page-list of banned items and resources was overturned last week, the Central York Banned Book Club is still active. They are sharing wishlists online for community libraries and organizations seeking to donate banned books this week (for banned book week). Their activism and others on TikTok led to thousands of books donated to the Haybrook Little Free Library.

Gupta told The Washington Post, “Even though it is important to celebrate this victory, we acknowledge that discrimination in the district did not disappear.”

In the grand scheme of book bans and a wave of censorship ostensibly about “critical race theory” that’s really just being used as code for anything conservatives don’t like (itself a reminder that the red scare tactics are still alive over 70 years later), this is a small win—especially considering that while the book ban is reversed, the board may choose later, when some of the heat is gone, to reinstate parts of the original ban.

However, for these students and this community, this is a massive win that will send rippling effects. Hopefully, this gives confidence to other young organizers to the power of using their voice and being persistent in standing up for what’s right.