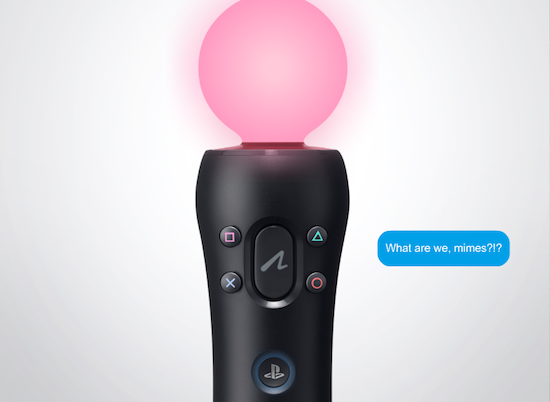 Adding fuel to the coming fire between Sony’s PlayStation Move and Microsoft’s Kinect, Sony launched an amusing satirical website, Yaybuttons.com, in support of buttons, something Kinect doesn’t have.

The site is actually quite funny, complete with an appearance by Kevin Butler, a fictional character Sony has been using as the PlayStation brand’s mascot for a while now, most notably in the “It Only Does Everything” ad campaign.

The main page of the site has a PlayStation Move controller (featured in the picture above), where one can click on the various buttons, causing blue text boxes to appear on screen, telling a humorous, stream-of-consciousness story about the importance of buttons. The site also contains various Move videos and bits of information about the product, dubbed “info snacks,” as well a funny interactive video featuring the Sensitive Fireman, where one enters personal information and the Sensitive Fireman charismatically includes the entered information into a personalized commercial for Move. He’s quite sensitive.

While one may find it a tad difficult to support Sony in their direct attacks against their competitors, at least Sony is taking an entertaining approach. So, go dig around the site and fuel the Move vs. Kinect fire, but most importantly, go get a whittled giraffe from the Sensitive Fireman.