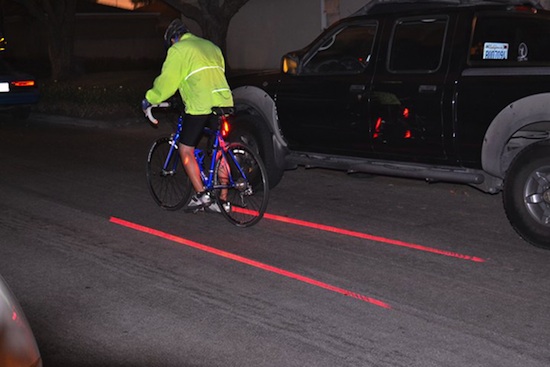 Full disclosure: The Xfire Bike Safety Light is not the laser I’ve always wanted on my bicycle — that fantasy has always been more of an anti-personell sort of a deal. It is a pretty nifty gadget, though. Mounted like a traditional bike blinker, the Xfire projects two laser lights that form a sort of virtual bike lane around a bicycle, so that rather than just seeing where you are, drivers can actually see how much space you take up on the road and — ideally — go several inches out of their way not to strike you with their car.

Despite more and more people riding bikes as their main form of transportation — yours truly included — bicycling can remain a harrowing way to get around many towns. I’ve been lucky enough to live in a lot of bike friendly cities, but even people who live in towns that are good to bicyclists have plenty of scary stories and close calls, at least some of which could be avoided by having a bike lane.

Having a bike lane isn’t a panacea for bicyclists, but it can go a long, long way towards helping people share the road effectively. I do my best not to take close calls with drivers personally, assuming that they simply don’t know how much room someone on a bike actually needs on the road. There’s no better indicator of that than bike lanes, which are absent from most roads.

Xfire’s laser lane isn’t perfect, but I love the thinking behind their solution — if municipalities won’t make bike lanes, put that responsibility in the hands of cyclists. Most of us will be happy to take it up, I assure you. Taken with the fact that the projector still has a traditional blinker in it as well, this is something that would make me feel a lot safer riding at night, and a lot better that I’m doing everything in my power to be seen and share the road responsibly, which I choose to believe is what everyone on the road is interested in.