The Rape Culture Is out There in The X-Files Season 11 Premiere, and Fans Are Angry 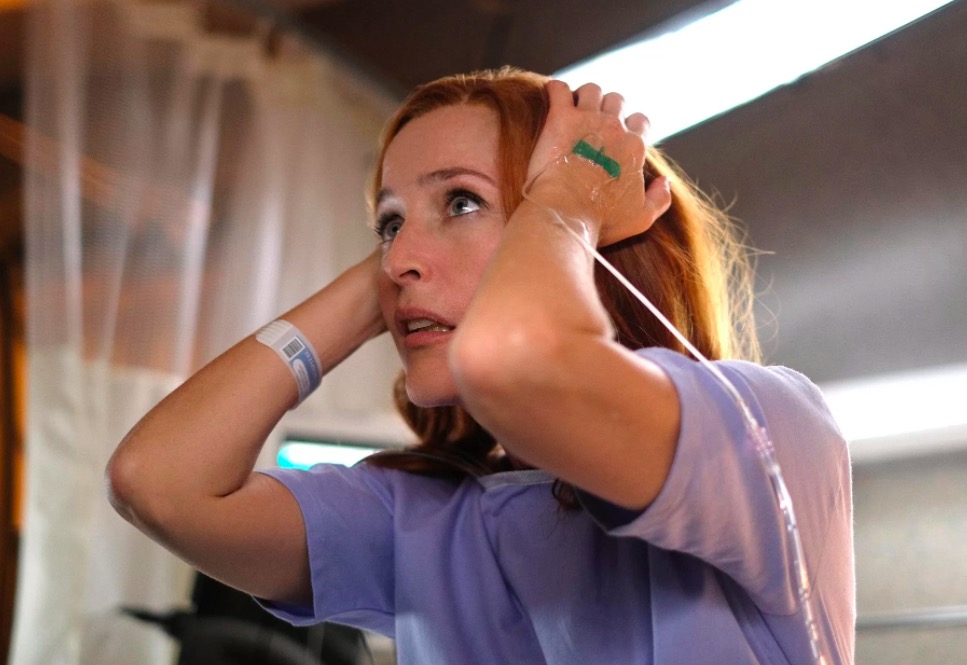 The final few minutes of last night’s X-Files premiere, titled “My Struggle III,” left fans outraged and angry after the Cigarette Smoking Man (CSM) revealed that he had “medically impregnated” Scully with what was formerly thought to be her and Mulder’s son, William. The CSM then declared that he was William’s father when asked by Mulder and Scully’s FBI boss, Skinner. This means that, while Skinner and the viewers now know this new information, Scully is in the dark about her own rape and the true parentage of her son.

While fans are certainly upset and disappointed that Mulder’s son has now been taken from him, which is of course a cruel thing to do to the character, the focus of the rage is rightly directed at series creator Chris Carter’s treatment of Scully as a character and as a woman. In addition to Carter’s AMA on Tuesday, stating that he “resented” any claims of misogyny toward Scully, he has now refused to call what the CSM had done to her “rape,” which is more infuriating and downright ridiculous. In an interview from Entertainment Weekly that was posted immediately after last night’s episode aired, EW writer James Hibberd asked the following and got an incredibly dismissive answer:

When CSM says he’s William’s father, is he literally his father, to some biological extent? Along with alien DNA?

No. He’s the figurative father if he’s not the actual father. He didn’t rape Scully. He impregnated her with science.

The emphasis on “he didn’t rape Scully” is my own, yet with these four words, Carter is demonstrating that he does not know the definition of rape and is attempting to dispel any fan rage over what is, in fact, yet another rape that Scully has undergone. What makes it worse is that she is completely unaware that the CSM raped her 17 years ago. To be raped yet have no knowledge until long after the fact—and to have your beloved child the outcome of said rape—is even more mentally damaging. Scully must face yet another violation after years of dealing with a number of sexual assaults, both attempted and successful, at the hands of the shadow government and the evil murderers that she has fought during her time on The X-Files.

Maintaining this position is not doing Carter any favors. It’s enraging female fans, and it is insulting to rape victims and to Scully. It is also wildly oblivious in the era of #MeToo and women finally speaking out against abusers in Hollywood. As a shining example of the white male showrunner in a position of power, Carter is merely reinforcing a sexist stereotype with his refusal to acknowledge rape in the show and his continued use of Scully’s body as a plot device.

Is the CSM deranged? Yes. Is it still possible that he is both lying and not the father? Yes. But the fact remains that he drugged Scully and violated her as she lay unconscious. The fact that it was “medical” or “with science” does not mean that it wasn’t rape. Carter is just trying to get out from under the stigma of having raped a beloved character and feminist icon in order to move the story forward.

Scully’s body does not exist for the sole purpose of being a vehicle to drive Carter’s plot, yet he has been treating her as such for the entire series. Gillian Anderson became pregnant in season two, and it was her pregnancy that led Carter to the idea of her being abducted by aliens and having her ova harvested/stolen. That was always the case and he was up front about it, and there were many instances of calling it “medical rape.”

We saw Scully grieve the loss of her fertility, Mulder finding some of her stolen ova and returning it to her, and even a flashback episode in which she tried to get pregnant via in vitro fertilization, with Mulder as the donor, that didn’t work. The fact that Scully got pregnant consensually and through sex with the man she loved was one of the bright spots in this sad saga. Taking that away from her and replacing it with more trauma and assault feels not only lazy from a storytelling point of view, but deeply disrespectful to this strong, resilient woman and the fans who have looked up to her for 25 years.

While Mulder is the initial character with whom the viewer is supposed to empathize as a believer and passionate advocate for the truth, Scully rises to the occasion and grows far beyond her initial skeptical scientist role. She grounded Mulder with her science and her support as her confidence and badass FBI agent cred endeared her to millions of fans, particularly women. Scully is a feminist role model, one of the first of the modern TV era.

To me, this smacks of a man (Carter) wanting to take Scully down a peg, make her pedestal as a feminist icon just a little lower, and take away some of her agency. Whether Carter is aware of this or not (and my guess is not), he appears almost jealous of the attention that Scully has received, and by extension the attention that Gillian Anderson receives as a result. After all, Carter has no Emmy awards—the highest award in television—on his shelf, but Anderson won a Best Actress Emmy in 1997.

Using women’s bodies to further the plot does not only extend to Scully, but to another primary female character in The X-Files: Mulder’s sister, Samantha. Her abduction during their childhood was the driving force for Mulder’s investigations into the paranormal and led him and Scully to break open the global conspiracy orchestrated by the Syndicate/shadow government. The CSM also used Samantha in ways we never found out, only that she was physically experimented on.

Can we take a minute to note how disgusting the CSM is? He’s a gross, dirty old man who takes delight in the manipulation of a much younger woman’s body (and of children’s bodies in the past, with his abduction of Samantha). While we are obviously supposed to see him as vile, Carter’s refusal to call this rape is beyond problematic. It. Is. Rape. End of story. Why it’s so hard for him to admit this plot choice, I do not know.

Using women’s bodies in this way is not new, but we need to continue to call it out in 2018 as we demand equal representation, in Hollywood and beyond. Just as Game of Thrones needed to deal with its rape problems, so too does The X-Files. Just because it enjoyed wild critical success in the ’90s does not make it immune to the critiques of today.

Here are just a scant few of the reactions that were posted on Twitter following the episode:

We can distinguish author from character. But CC chose THIS story. CSM is an established bad dude & there’s no reason to put Scully through the most tired, misogynistic trope in the book. It’s pitiful to abuse a character who could do so much more for a cheap shock.

Was Chris Carter planning this all along? bc if so, it’s disgusting. Creating a character that people consider a strong symbol for female agency and throwing her around like a toy for your shitty plot purposes. Get out of here. #thexfiles

I DON’T CARE THAT HE’S PROBABLY LYING!!! THE FACT THAT CHRIS CARTER WAS COMFORTABLE EVEN SUGGESTING THAT SCULLY WAS RAPED AND IMPREGNATED IS FUCKING DISGUSTING AND IT’S TERRIFYING THAT NO ONE STOPPED HIM AND SAID HEY, MAYBE DON’T

Chris Carter sat down to think of the new mytharc and decided medical rape was a good twist. #TheXFiles

Because they not only raped Scully, they turned the only child she can EVER have, her miracle baby, into the offspring of her biggest enemy.

Even if it all turns out to be a lie, and it probably will, it still muddies the water around Williams paternity. It leaves a question where there shouldn’t be one. This was nothing more than CC acting like a petulant child to spite the fans. It’s crap.#TheXFiles #MyStruggle3

Side note: I do not blame Gillian one bit in saying that she is done with The X-Files after this season. Look at what she’s dealing with!

One parting thought on this issue, although it feels like my brain will continue to have many, many thoughts for weeks to come, is that Gillian Anderson’s character on The Fall, Detective Stella Gibson, would be an excellent script supervisor on The X-Files. She would tell Chris Carter how it is, define consent accurately for him, and side-eye any attempts to brush off the term “rape.” Men don’t like it when women call them out for their writing, especially when they’re writing women and doing those women a grave disservice. I will end with a quote from Gibson: “That’s what really bothers you, isn’t it? The one-night stand? Man fucks woman. Subject man, verb fucks, object woman. That’s okay. Woman fucks man. Woman subject, man object. That’s not so comfortable for you is it?”

We’re collectively calling Chris Carter out on his misogyny and the rape culture he’s embedded into The X-Files. Not so comfortable for him, is it?

Amy Imhoff is a writer and editor who blogs at Shoes & Starships, a geek lifestyle blog that specializes in genre fandom, pop culture, travel, fashion, and feminism. She is a featured convention panelist, podcast contributor, and interviewer. Currently, Amy is an active contributor to ScreenPrismand Legion of Leia. She has her masters in literature, enjoys an obsession with all things British, and likes the smell of old books. Amy is based outside NYC, where she lives with her husband and two silly cats. Find her freaking out about The X-Files and Star Trek @lightstar1013.