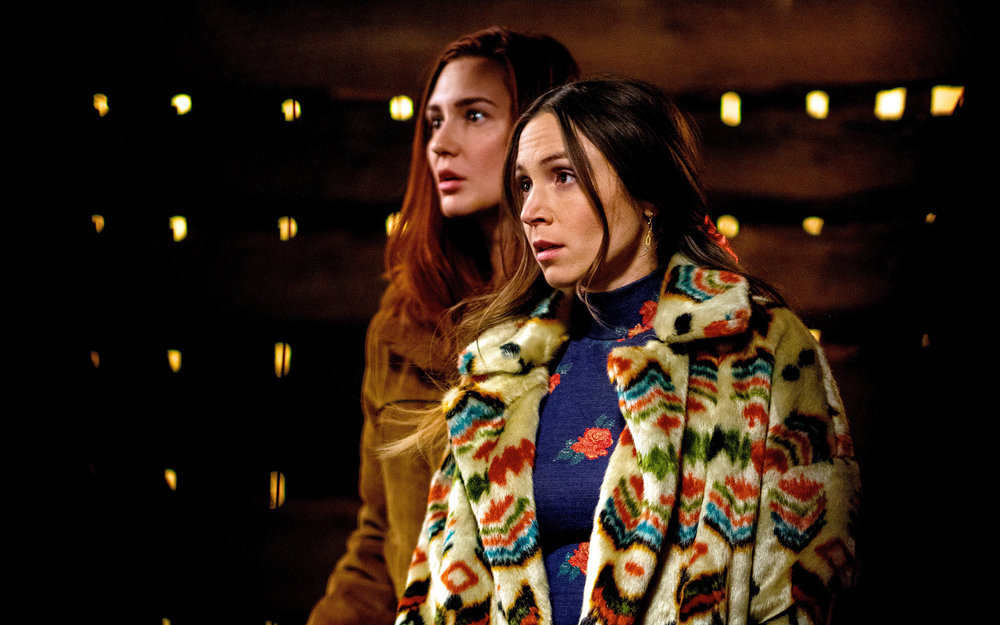 For one, I wished that this unprecedented lesbian sex scene made a bit more sense. Not just the unrealistic sex (we’ll get there), but the timing. It’s revealed later in the episode that Waverly has been gone for 18 months, and though I get wanting to make love to your soulmate the second they arrive home out of nowhere … Maybe Nicole might have asked “Where the hell have you been” before jumping into Waverly’s cute pants (which changed somehow in her journey from the Garden)?

And yes, I know I know it’s very silly to complain about things being unrealistic on a television show full of demons and doors to the Garden of Eden and magic guns. And I get that on television things aren’t real life, but I’m one of those people that like things to be, if not real, at least plausible or even just to make sense in the fantasy world in which they exist. This scene didn’t. Like, frankly, a lot of things on Wynonna Earp, there was a lot of wonderful style to the scene, but when you get to the substance it’s confusing and doesn’t make much sense.

And again, that’s all fine, really. Not all TV has to make sense to be entertaining. This scene was a gift to the “Wayhaught” shippers after years of fighting for their show and their ship. It was great to see two women together in a way we often only see for heterosexual couples and that it was done so artfully. Speaking to the TV Junkies, showrunner Emily Andras discussed how the scene met a demand from Wayhaught fans who wanted more on-screen intimacy.

I feel like I’ve been fighting the fight for a long time and it’s really important to me, so I was really excited about putting a sex scene on television that’s more commonly seen with heterosexual couples.

It was meant as a bold declaration that queer love is sexy and beautiful and magical, which it truly is. But queer love is also messy and tender and very often doesn’t involve conventionally beautiful, thin, femme people.

Though I don’t know what that, uh, thrusting was that was happening, it wasn’t the choreography, ultimately, that made me question this scene … it was that it made me sad that it’s still so rare to see lesbian/WLW relationships and scenes on television (or in movies) that accurately reflect the lesbian community that exists in the world. Where are the butch lesbians? Where are the fat femmes? Where are the women of color?

The failure that hurts me here is ultimately not with Wynonna Earp but with all of Hollywood. I’m frankly sick of a media landscape where only thin, femme, (and mostly) white women get to be sexual on screen. I’m tired of seeing the message in media that only certain bodies are worthy of desire or being photographed in soft focus to lilting indie music. On a higher level, I still want a far wider range of representation in my queer representation and just from all media. Even in crazy worlds with magic guns, I’d like to see something closer to the world and the body I live in, just for once.

Yes, this love scene broke barriers, but there are so many more barriers left to smash through. And yes, it was beautifully done, and I love the Wayhaught ship, and I love that queer fans can see their queer ship getting it on in improbable positions on screen. I just hope that this is the beginning, not the end for representation and that the next unprecedented sex scene between two women on TV looks a bit more like the reality I know.

And for goddess’s sake, I hope it happens someplace more comfortable than on the stairs.