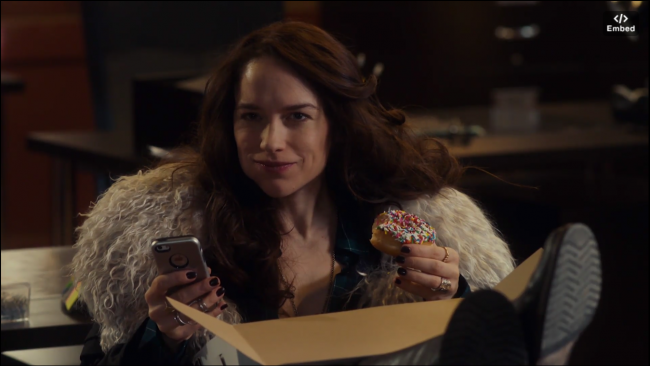 On paper, SyFy’s supernatural series Wynonna Earp probably sounds like something you’ve seen before. A spunky Chosen One gifted with a magical weapon and a special destiny must battle the forces of darkness, along with the help of a motley crew of sidekicks and potential love interests. This is pretty familiar territory for anyone who ever watched shows like Buffy the Vampire Slayer, Angel, Charmed, Supernatural, or recent British import Crazyhead.

Here, Wynonna Earp, great granddaughter of the famed U.S. marshal Wyatt Earp, returns to her hometown of Purgatory to find that she has inherited not only her ancestor’s famed Peacemaker revolver, but also the family curse requiring her to vanquish revenants, the resurrected souls of the outlaws Wyatt once killed. But that’s about where the similarities end. Rather than mirror the genre properties that have come before it, Wynonna Earp sets about playing with–or often outright flouting–many of the predetermined rules that govern these sorts of stories. And in doing so, it has carved out its own unique space within the quirky sci-fi slash horror genre, one that can tell very different sorts of stories.

By sidestepping the tropes we as viewers have been conditioned to expect in a series like this, it introduces its own new normal, one which often prioritizes relatable characters and interpersonal relationships over its mythology and plot. (Sure, that overall mythology still exists. But it’s probably going to end up at the very bottom of the reasons why you watch this show.) Wynonna Earp spent most of its second season breaking the rules of genre TV in ways both large and small, right up until the moment the credits rolled on its finale episode. It’s this willingness to choose the road less traveled that makes it feel like one of the most refreshing things on TV right now.

Wynonna is an unconventional Chosen One on her best day, a whiskey-drinking, smart-mouthed, sex positive hot mess who never met a rule she didn’t immediately want to ignore. She’s not exactly anyone’s idea of a role model, and yet, she becomes everyone’s hero. But its unorthodox lead character is not the only way in which Wynonna Earp breaks with established sci-fi and genre tradition. The drama is wonderfully inclusive, unapologetically featuring a feminist worldview and building its primary romance around a (seriously adorable) lesbian couple, one half of which is just discovering her LGBT identity.

And where many series might immediately stick their female lead in an endless love triangle, Wynonna Earp chooses to do just the opposite. While Wynonna may flirt–or more–with both Doc Holliday and Xavier Dolls, so far she’s chosen neither of them. And while both men have expressed varying degrees of feeling for her, the two of them haven’t become intensely competitive, territorial or jealous of one another. In fact, instead of fighting over Wynonna, the two men have become close friends, and seem to genuinely care about the other’s happiness.

But the series’ most shocking creative decision was born out of necessity. According to star Melanie Scrofano and showrunner Emily Andras, the choice to write in their lead’s real life pregnancy was a last-minute decision, made just before Wynonna’s second season started shooting. But the reason it works is that the show set us up to expect this sort of thing all along. It makes so much sense. Of course Wynonna would end up getting pregnant, because it’s the one thing that none of us would have ever guessed might happen to her.

Wynonna Earp embraces the idea of a pregnant heroine with the same gusto that it does everything else, seizing the opportunity to tell a story of strength, rather than one of weakness. Wynonna, pregnant, is not that much different than Wynonna at any other time–she keeps right on kicking butt, even up to and through the first pangs of labor pains. It’s remarkable really, how generally unremarkable Wynonna’s pregnancy is through the bulk of Season 2’s back half. Even as her condition makes itself more obvious, she just keeps on keeping on trucking, doing everything from engaging in elaborate training sessions, to going on a vision quest, to fighting the evil Widows and saving several friends–Nedley, Nicole–from certain death. (Honestly, that backflip Scrofano pulls off while pregnant is a wonder.) Wynonna is still–and always will be–Wynonna, just with the added ability to eat for two, and an apparent constant need for the restroom.

Often in science fiction or supernatural stories, pregnancy is viewed as a negative thing. Women who become pregnant in stories like these are often being possessed, punished, or violated by some otherworldly force. It’s not an accident that multiple supernatural stories (such as Rosemary’s Baby or Season 12 of Supernatural) feature a woman giving birth to the literal Antichrist. Pregnancy is something to be afraid of, and pregnant women are often portrayed as helpless victims. Here, pregnancy just adds another layer to Wynonna’s already complex character. And Wynonna Earp manages to neatly sidestep many of the uncomfortable tropes surrounding women and pregnancy on genre shows by simply treating it as a fact of her life.

In the end, for Wynonna herself, pregnancy and motherhood don’t derail her life or her destiny, but rather, they bring a certain new focused direction to both. Having a child adds an entirely new understanding to her perception of her duty, and a fresh motivation to break the curse on her family as quickly as possible. It’s one thing when Wynonna’s the only one with the sacred duty to kill the revenants and other horrifying monsters in the Ghost River Triangle. But now her daughter is also an Earp heir, a status which not only dooms her to her mother’s Peacemaker-slinging future if Wynonna fails, but paints an immediate and permanent target on her back. Alice’s birth motivates Wynonna to rededicate herself to her mission, and end the curse entirely, no matter what it takes.

How this will play out in Season 3 is anyone’s guess. Wynonna’s visit to her own long-absent mother in the finale’s closing moments not only indicates her seriousness about her new mission, but also implies that we’ll be dealing with many themes of motherhood, loss and absence next year. (Wynonna’s mother walked out on the Earp sisters when they were small, though the show has never delved much into the reasons why.) Where the show will take these ideas next is unknown, but the last minute revelation that Wynonna has always known where her supposedly “long-lost” mother was indicates that the destination will be somewhere unexpected.

Wynonna Earp feels like a show that could do anything because it’s already shown a willingness to blaze its own path, to look at what we expect from stories like this in a new way. The show is writing its own rules as it goes along, which is why it’s so much fun to watch. And it’s also why Season 3 will doubtlessly continue to surprise us, no matter where it goes.