WTF Comics Club, Year One: We Created a Comics Club for Women, and So Can You

All of this is a result of my social anxiety.

Actually, all of this is the result of my best friend telling me about her sister’s friends and the women’s comic book club they started. The idea that a similar club would do well in Minneapolis, one of the nerdiest cities in America, stuck in our heads until a conversation with my therapist about—you guessed it—dealing with social anxiety prompted me to bring it up again. Thus, The WTF Comics Club was born.

The only thing better than reading awesome comics is talking to awesome people about them, and that can be hard to find when you’re first getting started, especially if you feel out of place in comics culture because you’re, say, a Woman, Trans, Femme, or somewhere in that general gender area. A book club seems like the logical solution.

In the spirit of ladies making great comics about ladies, my co-captain and I decided to launch our adventure with the first volume of Kelly Sue DeConnick’s Captain Marvel. So we made a Facebook group and a Twitter account and a Tumblr page, and the next thing we knew, Kelly Sue DeConnick was reblogging our announcement. Between that, word of mouth, and friends dragging in friends, we assembled for our first meeting, pictured above.

The flawless human in the center is my co-captain and BFF, holding the sign she made, and the cutie in pink on the far left is our intrepid live tweeter.

As a group, we agreed that our reading should, first of all, continue to focus on women in comics, both as creators and as heroes, and second, to give equal time to the Big Two publishers and the slightly less mainstream set. Month to month, we decided on the next book, then the next, and the next. Slowly, we built a list:

Most of the books were hits, some fell a little flat, and some we just enjoyed so there wasn’t much to talk about. Unsurprisingly, Batwoman, Saga, and Nimona were among our favorites, while titles like Wonder Woman and Y sparked serious discussions about gender in comics and the changing political landscape. Our members made use of the local library system and various comics shops to get their books each month, and for the out of print or prohibitively expensive books, we created a Comixology account for the club in order to share digital copies.

For many of us, it’s refreshing just to spend a few hours geeking out with other women, and it’s exciting to find new things to read and new ways of looking at standing favorites. If you’re sitting there thinking that all of this sounds awesome and wishing you could go to a comic book club, then I have some good news for you: You can!

More and more women’s reading groups are popping up everyday, helped along by the rise of the Valkyries network. The Valkyries are an organization of women who work in comic book retail, and many of them are establishing Ladies’ Nights at their stores, including our heroes Heather and Juliette at Fantastic Comics in Berkeley. 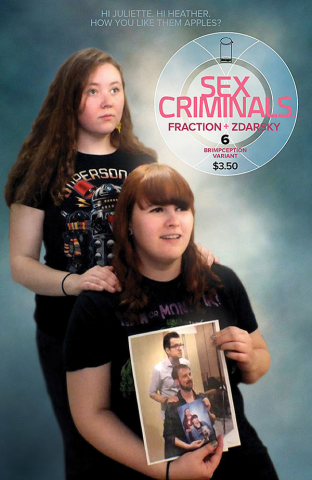 If there’s a Valkyrie in your area, there’s probably a group of some kind, and if there isn’t, then you should have a chat with them about starting one. If you don’t have a local Valkyrie, don’t be discouraged. There are nearly 20 comic shops in the Twin Cities metro area, with no women working at any of them, and we have two comic book clubs for women: WTF and Girls Only Comics Club, a weekly discussion group founded by comics creator and former Valkyrie Katie Rex.

Now some of you are feeling extra glum. Maybe there’s not a comics shop in your area. Maybe you live in a small town where the geek scene consists of four guys who play Magic on the floor at the bookstore. Maybe there’s absolutely no way that there’s a comic book club for anyone in your town, much less one for girls.

OK. So start one.

Sounds intimidating doesn’t it? I know the feeling, so to help you out, I’ve prepared a simple recipe for success.

Preparation
Using love of comics as a base, combine selected communication channels until the desired interest level is reached. Immediately add the schedule and location and allow the mixture to set until ready, preferably two to three weeks in advance to allow schedules to settle. Stir occasionally to keep communication fresh. Serve warm with a large dollop of all-natural enthusiasm. Yields an infinite number of servings.

Et voilà! Congratulations! You now have your very own comic book club. Don’t forget to feed and water it and take it for walks regularly.

Other things to keep in mind are the accessibility needs of your members and future members, differences in schedules, who you want your members to be, and whether you’re going to need any money. There’s a lot of nitty-gritty details and organization involved in managing a successful club of any kind, but the three most important things that you absolutely have remember are to be patient, be responsible, and be welcoming, even when you don’t feel like being any of those things.

On Sunday, WTF Comics Club is celebrating one year of reading together, and we couldn’t be more excited. To be fair, some of that excitement is probably because of the anniversary picnic, but I like to think at least a little bit comes from a shared sense of accomplishment.

Our reading list for next year is already set, and we’re ready to take on some heavy-hitters from the “Must Read” comics list, including titles like Maus, Ghost World, and The Dark Knight Returns. I’ll be covering our take on these books in an ongoing column for The Mary Sue (because I have the best editor ever), and that will kick off later in September with Watchmen.

Our Facebook group has all the news, updates, and things relevant to our interests, and our Twitter feed features live tweeting of the book discussions. If you’re of the W, T, or F variety and want to talk comics with some awesome folks, we’d love to have you join us online or in person, and everyone in the cities is invited to the anniversary picnic, including non-WTF humans and friendly dogs.

Like I said, the only thing better than reading comics is talking about comics, so that’s what we’re doing. Go ahead and try it sometime.