Writing Disability: When The Question of “What’s Wrong With Me?” Doesn’t Have an Answer

I used to hope that when I died, I would get some kind of printout (a post-mortem, if you will) of all the things that were wrong with me. Was my eczema caused by a mild food or environmental allergy I never identified? Was there a reason I couldn’t tell left from right? Had I missed the clues of some diagnosis that would have helped me understand everything?

As a tutor, I work with plenty of kids who have been diagnosed with learning disabilities and neurodivergence, but I also know so many students who do not have a diagnosis, who have been left, like I was, with no particular road map for handling their handfuls of mild, uncommon, or easily hidden symptoms. Sometimes it’s an issue of access to medical care, and some kids are less likely to be diagnosed because of their race or gender.

Some families have bought into stigma about certain conditions and will not consider even “classic” or “obvious” symptoms as sufficient evidence to bring their child for an assessment. Whatever the reason, the lack of support and information usually means that the students who arrive at my tutoring table have been dealing with feelings of shame, frustration, and confusion about their school work—that same question of “what’s wrong with me?”

When I wrote It Sounds Like This, I didn’t design characters with specific diagnoses in mind, but I did design them with traits from my own life and the lives of the people around me. Yasmín is able to stay on top of her schoolwork and excel because of her organizational skills and dedication, even though she finds writing and spelling difficult and has a vague sense that she has to work harder than her older sibling and classmates to make the same grades.

Like many kids her age, she believes she should be able to handle her issues alone. This belief changes slowly over the course of the book, but rather than finding an authority figure or label to change her attitude, Yasmín’s friends help her find coping skills and grace for herself. In turn, she provides body doubling and organizational check-ins for her friend Bloom, who is finding it challenging to lead the low brass section. Bloom, who does have an ADHD diagnosis, talks openly about his accommodations, audio processing issues, and hyperfixations, and urges Yasmín to work with what her brain is offering without feeling ashamed or like she needs to “power through” tasks that are difficult.

Yasmín even notices and recognizes the moments when Bloom isn’t so confident, relating his apologetic “I can’t hear” to her common half-joking “I can’t read.” These are small character moments, not major plot points or the axis on which the novel turns, but it was important for me that these and other characters throughout the book have the chance to live and cope with their symptoms, with or without diagnoses, and to find friendships that value their strengths and support their weaknesses.

These days I still have no diagnoses, but rather than waiting around for a big reveal, I’m putting more energy into finding things that work for me and my mental and physical quirks, and surrounding myself with people who don’t hold themselves or others to ableist standards. This is only one small facet of a disability experience, and does not speak to the issues of medical and systemic ableism that affect diagnosed disabilities, but it is the experience I have, and one I was excited to explore on the page. I hope some readers find it helpful.

A sweet and nerdy contemporary YA novel set in the world of marching band perfect for fans of Late to the Party, Fat Chance, Charlie Vega and Kate in Waiting.

Yasmín Treviño didn’t have much of a freshman year thanks to Hurricane Humphrey, but she’s ready to take sophomore year by storm. That means mastering the marching side of marching band–fast!–so she can outshine her BFF Sofia as top of the flute section, earn first chair, and impress both her future college admission boards and her comfortably unattainable drum major crush Gilberto Reyes.

But Yasmín steps off on the wrong foot when she reports an anonymous gossip Instagram account harassing new band members and accidentally gets the entire low brass section suspended from extracurriculars. With no low brass section, the band is doomed, so Yasmín decides to take things into her own hands, learn to play the tuba, and lead a gaggle of rowdy freshman boys who are just as green to marching and playing as she is. She’ll happily wrestle an ancient school tuba if it means fixing the mess she might have caused.

But when the secret gossip Instagram escalates their campaign of harassment and Yasmín’s friendship with Sofia deteriorates, things at school might be too hard to bear. Luckily, the support of Yasmín’s new section–especially introverted section leader Bloom, a sweet ace and aro-spectrum boy–might just turn things around. 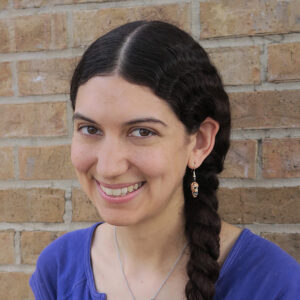 I live in Houston with my dog Cisco. I have taught creative writing and high school English and currently work as a tutor for students of all ages across Houston. In my free time I love knitting, playing full-contact quadball, and singing along to songs in English, Spanish, and American Sign Language.