Wrinkle the Duck Is Beauty. She’s Grace. She’ll Quack Throughout the Marathon Race. 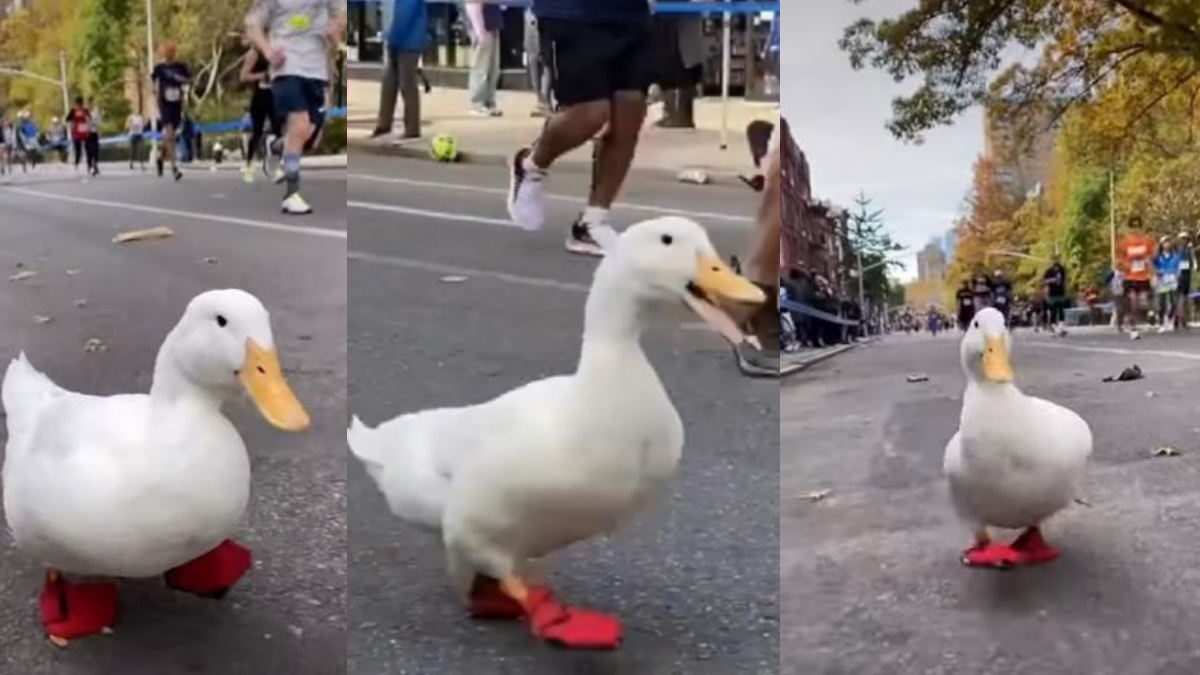 On Sunday, November 7th, thousands of runners took part in the New York City marathon. One of the runners has captured the hearts of everyone – both at the marathon and those of us who read about it online.

Well, I did not expect a duck to run in the #NYCMarathon yesterday but here we are.

Yes, that is, in fact, a duck running the marathon. And yes, she’s wearing little red duck shoes.

In the above video (which plays the footage in a loop) you can hear how much the crowd is cheering for the white Pekin duck. At one point someone screams “let’s go, ducky!” and someone else encourages her to “keep going!” She does have a moment where she slows down, after all, she is running a whole ass marathon, but when you’ve got an entire New York City marathon screaming “YES” just because you showed up, it’s easy to find the inspiration to keep moving forward.

I suppose this shouldn’t be a surprise. If the media has taught us anything it’s that ducks are quite capable creatures. Darkwing frequently “gets dangerous” in order to fight crime, Launchpad can fly a plane (kinda), there’s a duck that reminds you to buy insurance, there’s the entire essence that is Daffy Duck, and there’s this little guy right here:

I rest my case.

Who is this duck?

Now if you’re like me, this is your first time seeing this quacker cutie in action, but it turns out the duck with the “seducktive” handle (yes, autocorrect, I spelled that right) is already an Internet darling.

“Wrinkle the Duck is more than just a beautiful Pekin duck,” says the description of the video. “She is a full-grown adult human child. She is fast. She is speed. She is zoom. She is Wrinkle. Still fast as duck boiiii!”

I just met this duck and I already wanna be friends with her and her mom and dad.

According to her Instagram account, Wrinkle is a “time-traveling duck” who is up to all sorts of hijinks.

She has a pretty busy schedule, but that doesn’t mean she doesn’t take time to enjoy the simple pleasures in life.

She’s also pretty popular on the dating scene, in fact, she went to Prom back in September.

What’s next for Wrinkle?

According to a recently released marathon training video, Wrinkle is hoping to take on the Kentucky Derby. Is this a serious goal or just a cheeky comment to make on an Instagram post? Is it both? I’m gonna pretend like it’s both, which means that Wrinkle has until May of next year to get her webbed feet ready for the big race.

Taking on horses in a race is a bit of a daunting task in comparison to doing a marathon, especially when you’re a duck, but Wrinkle is, if nothing else, persistent.

“I’m not always good at running, but practice makes perfect! I’ll run faster than a horse one day!”

You can check out what Wrinkle’s got going on right over here.