The Two Worst Romantic Relationships in the Marvel Cinematic Universe 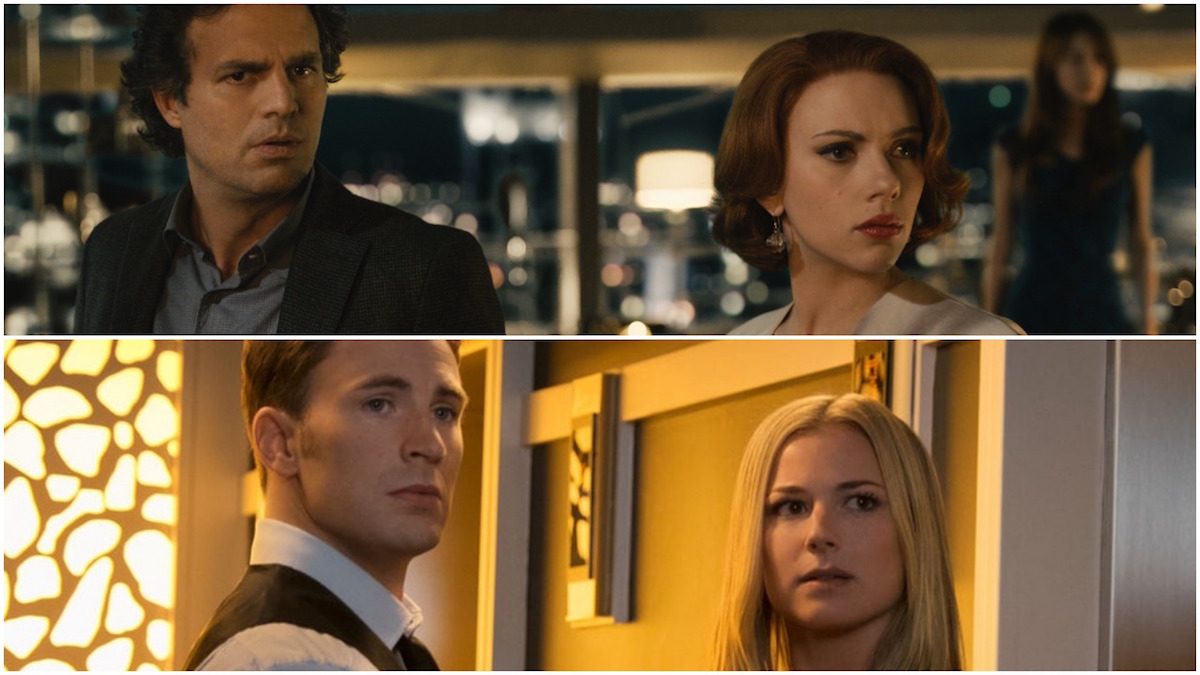 Marvel movies do many things well, but romance is not generally one of them.

Going into Marvel movies, you can be sure that you’ll see fantastic action sequences, quippy one-liners, and tragic deaths that motivate our heroes. You do not go into Marvel movies expecting to see romance portrayed convincingly. Marvel has a history of tepid love interests who often lack chemistry with the hero or heroine or flat-out disappear from the scene as though they were never there.

I’m hoping that there’s a paradigm shift in the works: in the romantic arena, Black Panther was a breath of fresh air, introducing Nakia as an independent woman with her own life and agenda apart from T’Challa’s. Theirs was a realistic adult relationship, aside from the fact that they’re royalty and a superhero and a superspy, respectively—they’d been together in the past, they found their way back to one another, they encouraged each others’ endeavors. In the course of a single movie, they succeeded brilliantly in showing how a good romance can develop in a superhero film; it doesn’t need to be front and center, but it can be present and sexy and supportive and warm.

T’Challa and Nakia proved that romance in the MCU doesn’t need to be angst-driven or uncomfortable or seem to come out of left field. This has, unfortunately, marked many of Marvel’s attempted romantic endeavors in the past. For every Steve Rogers and Peggy Carter, there’s a Steve Rogers and Sharon Carter. So let’s start there.

Sometimes it seems as though Marvel shoehorns in romances that are well-developed in the comics without giving them the same development onscreen (*cough* Wanda/Vision *cough*). This appears to be the case when it comes to Steve and Sharon in the MCU.

I like the character of Sharon Carter and the actress Emily VanCamp, but both have been totally shortchanged by the movies. Sharon sort of gets to flirt with Steve while spying on him in Winter Soldier, and then Civil War tries to lend her a moment of gravitas by giving her a version of Cap’s famous “No, you move” comics speech at Peggy’s funeral. The fact of the matter is, however, that we know essentially nothing about movie Sharon or what makes her tick, and she seems to be labeled a love interest for Steve simply because she’s pretty and present and a girl.

Sharon’s proven herself a helpful and capable resource when our heroes are in a tight spot. But none of her interactions with Steve prime her for the kiss they share in Civil War. It appears out of nowhere, and it takes place in front of Bucky Barnes and Sam Wilson grinning at their bro, as though the Russos felt the need to wave a giant NO HOMO flag over the wildly popular fandom pairing of Steve/Bucky.

The Steve/Bucky subtext is so present in the Captain America movies that it’s the rare fan pairing that gets mainstream press attention and reporters frequently commenting on the actors’ chemistry. “Maybe it was a little Brokeback Mountain at times … Maybe it was a little ‘I won’t quit you,’” Sebastian Stan said of the characters’ interaction in Winter Soldier. Even the Russos have called Steve and Bucky “a love story,” but just, you know, not the gay kind. Per Empire:

“What’s fascinating about the Cap-Bucky story as well is it’s a love story,” says the co-director. Stop your sniggering at the back, he’s talking about the fraternal kind. “These are two guys who grew up together, and so they have that same emotional connection to each other as brothers would, and even more so because Bucky was all Steve had growing up.”

The MCU is, at present, NO HOMO, so Steve kisses a woman he barely knows who is the grand niece of the first woman that he loved, Peggy Carter, who has just passed away. Freud would have a field day with this one.

“Every stolen glance between Steve and Sharon feels clunky; every attempt at chemistry reads as a distraction,” Vox wrote. “Evans and VanCamp — despite being demonstrably capable of charming performances otherwise — have about as much of a romantic spark as wet concrete.”

Before Infinity War, Emily VanCamp alluded to her lack of inclusion in the movie, saying, “I mean listen, it’s hard to fit Sharon into that. She’s really in Cap’s world, you know what I mean? So, I mean, I can’t say anything about anything, but I will say that you know she sort of fits into the Captain America movies, that’s where her sort of story lies.” Infinity War screenwriters Christopher Marcus and Stephen McFeely seemed to imply that they considered including Sharon in the movie, but ultimately felt that there wasn’t time. Marcus told Collider:

Sharon Carter was a victim of what we came to realize as we were writing it, which is that if you’re writing scenes that set up people before the story has gotten to them, such as Steve and Sharon trying to make it work in an apartment, they’re gonna go because the movie does not have time to catch up ‘previously on the life of Steve Rogers.’

Honestly, I’m glad that we were spared scenes of Steve and Sharon trying to make it work in an apartment. But considering the movie still had time for Tony to tell Pepper his dreams about her being pregnant and to create an entire two-year Wanda/Vision relationship out of whole cloth, it’s hard not to feel like the real reason there isn’t room for Sharon is because the romance is unconvincing, underdeveloped and unneeded. Nobody would miss it or feel it lacking in Infinity War. And considering that we’re unlikely to have another standalone Captain America movie starring Chris Evans, this might well be the end of the line for Sharon Carter in the MCU.

(Put her in a Lady Liberators movie, you cowards.)

Even typing their names together makes me feel uncomfortable. The MCU appears hellbent on trying to make Bruce/Natasha happen, despite no romantic history between them in the comics and no plausible reason why they’d be together except … they’re the only two unattached Avengers?

It seriously felt like Joss Whedon looked around while writing Age of Ultron (typing Age of Ultron also makes me feel uncomfortable), and since he decided to give Clint Barton a secret family rather than pair him with Natasha as many fans had hoped, Whedon just said to himself, “Well, who’s left for Nat? Bruce Banner? Let’s do this! And let’s give the world’s most badass assassin a huge complex about being sterilized and unable to have children, after which she calls herself a monster. Because what all women want is a man and children. I, Joss Whedon, am a genius.”

Bruce/Natasha also seems to come out of nowhere, and Age of Ultron basically reduces Natasha to begging Bruce to hook up with her. Mark Ruffalo and Scarlett Johansson lack romantic chemistry and every attempted interlude feels forced and weird, since their sudden entanglement is based on nothing but Whedon’s whim. There’s a 17-year-age difference between the actors as well, which doesn’t have to matter, although I seriously doubt we’d see Marvel doing the reverse and matching a 50-year-old woman with a 33-year old man.

If you can get through the scene above without cringing and feeling like you’re being made to watch the world’s most unsexy soap opera, you are a stronger person than I am. The Bruce/Nat thread is introduced again briefly in Thor: Ragnarok, when the Hulk turns back into Banner after Natasha’s recorded image pops up on a video screen, though director Taika Waititi seems to poke some fun by having Thor frequently try to use Natasha’s “Sun’s going down” Hulk lullaby.

Then there’s the characters’ singular interaction in Infinity War. Bruce approaches Team Cap at the Avengers compound. “Hello, Bruce,” Natasha says pointedly. Bruce looks like a deer caught in headlights and about to be hit by a truck. Sam Wilson speaks for the audience: “This is awkward.” And, scene. I mean, the stuff that romantic dreams are made of, right?

“They’re star-crossed lovers,” Mark Ruffalo said of Bruce and Natasha in the run-up to Infinity War. “So it’ll be something they’re dealing with for the rest of their living days I think. Whether it’s requited or unrequited, I don’t imagine that’s gonna go away any time soon in one iteration or another.” The origin of the phrase “star-crossed lovers” meant a relationship that was “thwarted by a malign star,” constantly disrupted by outside forces. In the case of Bruce/Natasha, I’d argue that a complete lack of chemistry or compelling motivation to be together is their malign force.

Marvel has shown itself capable of creating romances that are memorable and audiences feel passionate about. But their insistence on shoehorning in love interests where they are not needed is a trend I very much hope will peter out. Not every movie or character needs a romance, either—look at how well Thor: Ragnarok played out by not pursuing Thor/Valkyrie, or how Winter Soldier, one of the MCU’s best films, did not feature any romance whatsoever (save that Steve/Bucky subtext).

Audiences like to be able to relate to heroes, and romance can help to humanize the superpowered. Audiences are, however, discerning. Social and digital media mean that a kiss is never just a kiss—we can still talk about it years after, and it will live forever in GIF form. It would be good for the creatives to remember this, and to give us kisses that are well-earned and really mean something.