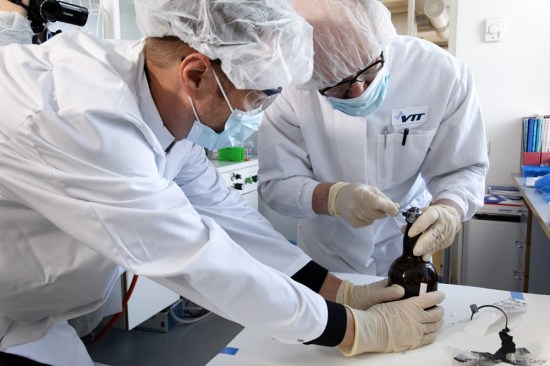 Back in July, divers discovered a shipwreck in the Baltic Sea, dated tothe early 1800s. But the most interesting discover was within the shipwreck — more than 100 bottles of uncorked champagne. In November, they uncorked some of those bottles to give it a taste and found out that five of those bottles had beer in them. And now, they’ve commissioned scientists to find out the formula of that beer and brew it again. See, everyone? We can learn from history.

The beer was discovered during the salvaging process, when one of the bottles of champagne broke and revealed itself to be beer. While the champagne was a great find in itself, one of the divers — also a pub owner — felt that the more interesting and profitable discovery was the beer.

“I don’t care so much about the champagne,” Christian Ekstroem, the diver who discovered the wreck’s cargo, said.

“Champagne we can only sell or drink up, but … we can use the beer to produce something unique and local. It’s historically meaningful.”

Mr. Ekstroem, in addition to being the province’s foremost diver, is also the manager of a pub for a local microbrewery, called Stallhagen.

Four professional beer tasters have sampled the beer, saying that the taste is “very old” and “acidic” with some “burnt notes.” The “old” taste can probably be attributed to the beer being … 200 years old. But that hasn’t stopped the enthusiasm behind further examining the brew for live yeasts and resurrecting the formula so it can be produced locally. Because while several beer formulas probably come from vintage recipes, how could you not want to try the Shipwreck Brew?

“So far we have seen under microscopes that there are yeast and bacterial cells, but we don’t know if they’re dead or alive yet. If we can’t find living microbes, we will look at the DNA and try to compare it to brewing yeasts that we know today, to see how similar or different the yeasts are.”

The most difficult part of recreating the formula will be figuring out which hops were used. Scientists will be keeping in mind the conditions and grains of the early 19th century and may have to take some poetic license. Personally, I think they should conduct their own research in their off-hours at several local pubs, seeing what might taste similar to the original hops, and then toast themselves for working on the most fun historical experiment ever.