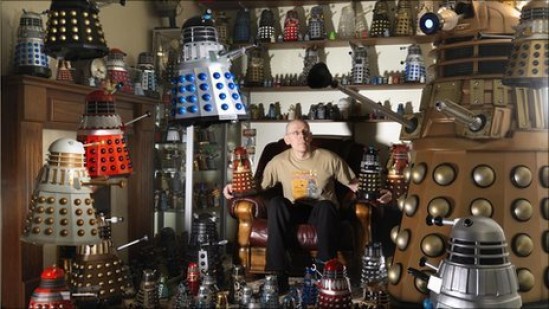 Love them or hate them, Doctor Who’s Daleks are one of the most iconic foes in science fiction history, either because the time-traveling show has been around for over 40 years and Daleks have — for the most part — remain unchanged, because their catchphrase of terribly screechy voice has been engrained into your head, or because they’re basically big garbage cans with a plunger arm. However you know Daleks, you probably don’t know Daleks like 49-year-old Rob Hull, who has made it into the 2012 Guinness Book of World Records because he owns the world’s largest Dalek collection, with 571 Daleks. Maybe Hull’s collection is why the Daleks continue returning even though the Doctor defeats them forever every single season.

The 571 Daleks took Hull 20 years to collect, but he didn’t spend those 20 years watching Doctor Who, because he’s not a fan of the show, which I suppose should’ve been obvious considering he only owns the world’s largest collection of Daleks.

“I’ve never been a fan of the show, but I have been enchanted by the Daleks ever since I saw one in a toy store as a child.

My mum wouldn’t buy it for me, but I swore at that moment that I’d have my own one day.”

Hull bought his first Dalek at age 29 and the collection took off from there. Naturally, his wife hates that her husband has 571 Daleks:

“I hate the bloody things and I’ve got a feeling this is only going to encourage him!”

(story via The Doctor Who News Page, newslite.tv)