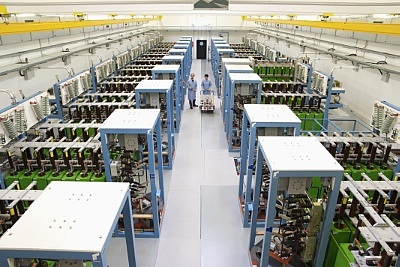 The stronger the electrical current flows through the coil, the stronger the magnetic forces become. To create a coil where the copper could withstand the forces acted upon it, the researchers had to use copper alloys that could withstand ten thousand times the atmospheric pressure. They added a corset made from the fibers used to make bulletproof vests to hold the alloy together from the outside of the copper wires. The researchers then wound six of these wires into a coil with a hollow space of 16 mm in the middle. This space allows the generation of 50 Tesla within the coil when a quick electric pulse travels through the copper.

But a mere 50 Tesla doesn’t hold a candle to the world record of 89 Tesla set by the US by Los Alamos National Laboratory. So, to beat the record, the researchers attached a second coil made up of twelve layers of copper wire around the first one. This wire, can only withstand 2,500 times the atmospheric pressure, but is protected by a plastic corset, and can create a 40 tesla magnetic field inside the coil. Combined the 50 Tesla of the inner coil and the 40 Tesla of the outer coil beat the Los Alamos world record by reaching more than 90 Tesla.

The double coil is covered with a steel jacket, and has a height of 55 cm and a diameter of 32 cm. The researchers expect many researchers to be drawn to Dresden to work with the coil. To meet the expected influx of interest, the researchers have said they will make an additional six of these double coils by 2015.