An Exoskeleton Suit Opened the World Cup | The Mary Sue

A Man in a Mind-Controlled Exoskeleton Opened the World Cup Yesterday, and Everyone Should Know About It 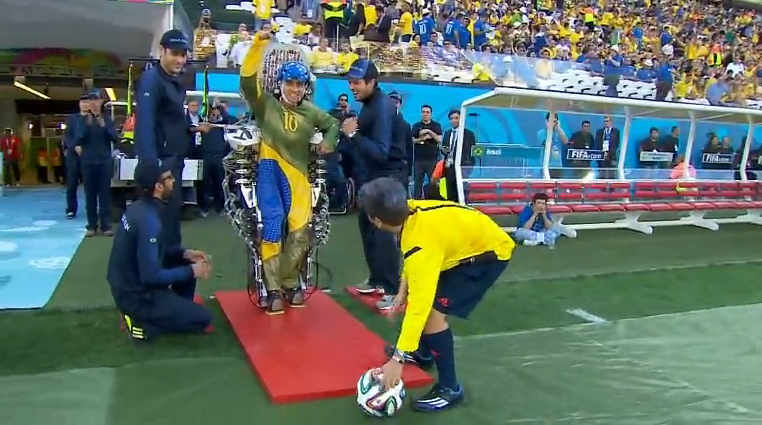 The World Cup opened yesterday with a kick off by Juliano Pinto, a 29-year-old paralyzed from the waist down. The magnitude of Pinto’s appearance was largely overlooked in the excitement of other opening day festivities (thanks a lot, Pitbull’s pants!) so if you managed to miss the triumph in robotics,  we’ve got video and info right here.

If you were one of the many fans yesterday watching a network that completely ignored Pinto’s appearance, watch and be amazed:

So what went into building an exoskeleton worthy of Tony Stark? It took Duke University neuroscientist Miguel Nicolelis $20 million dollars and a team of 150 international scientists (many of whom worked for free) to perfect the technology as part of his Walk Again Project. Nicolelis says yesterday’s kick-off demonstrated “the first time an exoskeleton has been controlled by brain activity and offered feedback to the patients.”

The suit works by transmitting brain stimulation from a cap on the wearer’s head into a backpack-like device, which then decodes different messages from the brain and transmits them to the hydraulics-powered legs. Not only does the suit restore mobility for a user like Pinto, the BBC reports that, with training, the patient’s brain begins to relate movement in the legs with the arms, creating the sensation of walking (or, in this instance, kicking.)

Nicolelis says that although the impressive display yesterday was largely overlooked by the media, he still sees it as a huge triumph:

Doing a demonstration in a stadium is something very much outside our routine in robotics. It’s never been done before […]The big challenge was to overcome the skepticism […] We knew this would be possible. Most people thought this was a great idea but that it was not possible.

Nicolelis and his team are now working on implanting a chip in the wearer’s brain to collect neuron data and make the suit’s movements as smooth as possible.

I have no doubt in 10 years that you’ll see people walking in the streets with these devices. You basically show people that there is hope that this can come to fruition faster […]  Science can change the lives of a lot of people.

So in ten years, that’ll be two World Cups from now, correct? (That is the extent of my sports knowledge, people.) Hopefully in a decade we’ll be able to give this kind of triumph the attention it deserves.

(via Popular Science and io9,image via Pedro Augusto on Twitter)