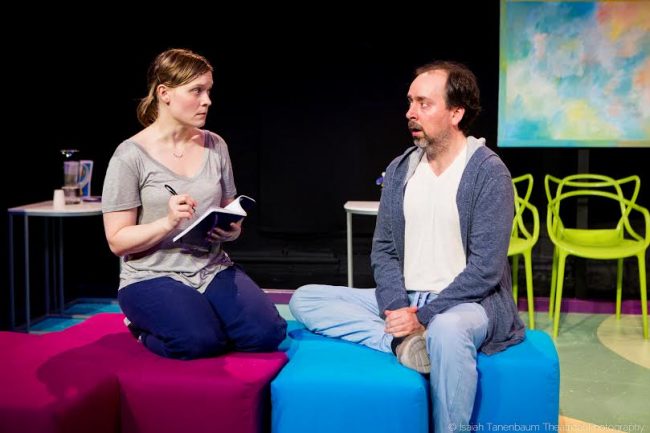 Here at The Mary Sue, we’re big fans of the stage, and we’re eager to shine a light on productions big and small that dabble in genre themes. If you represent Hamilton, note that we love history as well and tickets can be sent to The Mary Sue office.

When you’re in love, it’s not uncommon to act as if you’re the only two people in the world. But for Whitney (Alisha Spielmann) and Max (August Schulenberg), brought together by an experimental drug trial, that feeling is compounded: For one, they’re both narcissists with a slippery grasp on reality, prone to escaping into their respective fantasy worlds when they’re bored with the real one.

As the unconventional romantic leads of Johnna Adams’ enthralling play World Builders: A Love Story, they inhabit three planes: two worlds crafted entirely from their imaginations—his as confined as hers is expansive—and the lounge in the psychiatric ward where they’ve both been sent for six weeks. Neither can enter the other’s world, but this physical space is where, week after week, they must awkwardly interact with one another.

It’s Whitney, the adventurer, the godlike creator within her own imagination, who makes first contact IRL: Her world is dying, she says, thanks to this nameless but ominous drug. If it actually works, soon the space opera epic she has been crafting since she was 12 years old will disappear. She doesn’t know the specifics of Max’s world, nor his reason for participating in the trial, but she recognizes a kindred spirit, someone grieving the slow graying-out of his alternate reality. She proposes that each act as an amateur historian for the other, trading oral traditions so that at least one other person will know that this world existed.

Max and Whitney may initially start out as something of clichés—he painfully awkward, she an unfiltered loudmouth—but as they begin to open up to one another about this most intimate secret, their characters are slowly sketched in. Every aspect of Flux Theatre Ensemble’s production aids in this real-time excavation of character. For one, you might notice that the set of the lounge—with its painfully convincing trappings, down to the neutral abstract art on the walls—has a slight lip on all sides, subtly enclosing the space so that it resembles a sandbox.

Let Spielmann and Schulenberg loose in this sandbox, and you’re watching not just a play, but the pure act of play. In what must be an exhausting two-hander without an intermission, these talented actors (both longtime Flux Creative Partners) already look wrecked, down to their greasy hair and unwashed clothes. But despite their convincingly dingy exteriors, they bring light to Max and Whitney’s eyes. It could be the light of mania, but as each becomes inextricably linked into the threads of the other’s world, they start to sound sane. Under Kelly O’Donnell’s adept direction, their conversations transform from halting small talk into a tapestry of performance, oral tradition, guided tour, showing off, and a good, old-fashioned yarn.

It’s not my place to tell you about their worlds; you should hear it from them. Suffice to say, Whitney’s is fantastical, while Max’s is disturbing—hers is a dream, his a nightmare.

Whitney describes her world as “full of not-real people that are better than real people.” So … a play? And here is where Adams’ script excels, in deconstructing (sometimes cheekily, sometimes achingly) the art of storytelling—how it acts as both a comfort and a crutch. The most fascinating parts of the play are when Max, finally creeping out of his shell, challenges Whitney about her tendency to “rewind” the action in her world and retcon (just like in comic books) key romances, fight sequences, and deaths so that no high or low is ever permanent, is always mutable.

Of course, they both have death on the brain, as their grasps on alternate reality slowly slip away—a fascinating reversal of many stories of mental health. What is the best ending that a creator could give his or her world? Do you kill off all of your characters to give them finite conclusions, or do you simply step away from what you created and let it go on without you?

And when one world closes, can something else open? As the drugs take effect, Whitney and Max confront the most unexpected of side effects: feelings. Whether this strange affection for each other is just a placebo effect is never answered, and some of their respective “eww gross” reactions verge on the childish rather than the aromantic or asexual. Still, these misfits were made for each other, if not entirely for us, the audience.

Part of the headiness of the first weeks of new love is spending hours spooling out hypothetical futures, taking the emotional leap to envision one another together beyond just that moment. While World Builders drags a little near the end, it redeems itself in a penultimate, dizzying back-and-forth in which Whitney and Max rapid-fire create and scrap possible solutions for their relationship (one of which is in my notes as simply “OH JESUS NO but also YES”). It’s the kind of exchange that only the two involved can truly keep up with.

World Builders taps into both the visceral thrill of diving into a lush, densely plotted universe different from our own, and the fascinating quasi-voyeurism of watching two people strip away all artifices and lay themselves bare.

World Builders runs through May 13 at West End Theatre in New York City. As part of its bicoastal premiere, a second production of World Builders will open in Los Angeles this summer. Check out fluxtheatre.org for tickets and more information.

Natalie Zutter is a playwright and pop culture critic whose work tackles everything from rape culture in Jessica Jones to the best Hamilton mashups. She is one of the Amtrak Writers-in-Residence for 2016-2017. Find her on Twitter @nataliezutter.