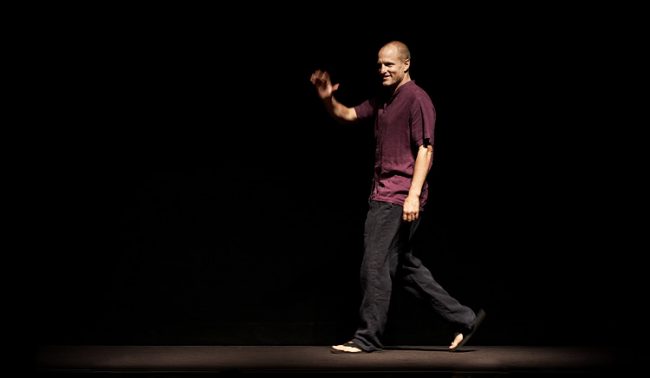 Now, I have absolutely no clue what role Woody Harrelson will play in the Han Solo movie… but I have a guess, and I’m far from the first person to make this guess, because it’s so obvious. Harrelson would be juuust about the right age to play Han Solo’s dad, wouldn’t he?

Harrelson is already well-known for playing a grumpy father figure of sorts in The Hunger Games, so it’s a no-brainer that he’d be capable of playing that part again. THR reported, back when Harrelson was in talks to join the cast, that he was in consideration to play an “early mentor” to Han Solo. Even if he isn’t going to actually be Han Solo’s dad in a biological sense, he’ll probably still be serving that role, in some form. With a rebellious lead character like Han Solo, you’ve got to give him something–or someone–to rebel against.

The film’s directors, Phil Lord and Christopher Miller, had this to say about Harrelson coming aboard: “We couldn’t be more excited to work with an artist with as much depth and range as Woody. His ability to find both humor and pathos, often in the same role, is truly unique. He is also very good at ping pong.”

Well, Mr. Harrelson, if you want to play ping pong on the set of the Han Solo movie, we have some advice for you: let the Wookiee win.

We also know that this Han Solo origin story will be as much about Chewie as it is about Han. Since Chewie is much older than his human friend, I doubt he’ll care much about respecting authority. It’ll definitely be interesting to see how that dynamic plays out, between Chewie and Han’s mentor. And, of course, we also know that Lando will be there, too. Young Han will be dragged in a lot of different directions… but we already know where he ends up. It’s just a matter of how it all went down.