Wonder Woman Getting a TV Show: Gee. Thanks. 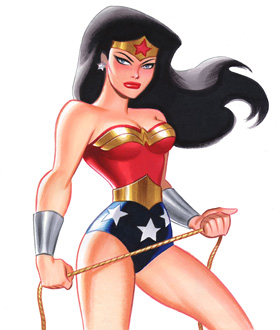 Both Deadline Hollywood and The Hollywood Reporter have some blockbuster geek news today: instead of making the long pre-production purgatory dwelling Wonder Woman movie, DC Entertainment is optioning a television show featuring the Amazonian princess, with David E. Kelley to write and produce.

Aside from the sense of “Oh, good, somebody is going to do something with Wonder Woman,” this tingles every last geek girl sense in my body.

So, Wonder Woman doesn’t get a movie, but DC properties like John Constantine, Jonah Hex, The Losers, RED, and The Spirit do?

Wonder Woman is the third oldest major IP that DC has and has been published almost continually since 1941.  Not to mention the Lynda Carter show.  The idea that she is a property that is unknown to the greater public is silly. Just look at the mainstream response to her costume change.

David E. Kelley was the writer and producer behind Ally McBeal, The Practice, Boston Public, and Boston Legal.  Ok, sure, I liked Ally McBeal when I was in middle school.  I’m glad they’re getting a writer (albeit a male one) who can deftly handle female characters, and also writes shows with a lot of wit, humor, and intelligence.

But here’s what David E. Kelley doesn’t have on his resume: the action, sci-fi, or fantasy (which Wonder Woman skirts much closer to) genres.  I’m not saying it isn’t within his capabilities, but you hire a guy for what is on his resume.

Add to that this snippet from Deadline Hollywood:

Details on the reboot are being kept under wraps, and it is not clear if the new Wonder Woman aka Diana Prince will keep her signature powers and weapons, including her Lasso of Truth, her indestructible bracelets, her tiara and her invisible airplane.

While it is strictly true that there are less women in the geek world then there are men, responding this obviously to that fact betrays a hunger for money that is greater than a sense of devotion to character.  And I swear to Hera, if this means a show full of humorous dating situations, talk about a “biological clock,” and laughs about co-ed bathrooms with not a superpower in sight; there won’t be enough XKCD comics in the full space-time continuum to express my rage.

Now, I’m going to turn off the nerdrage valve before I wind up behind the couch with a rawhide chew, growling.