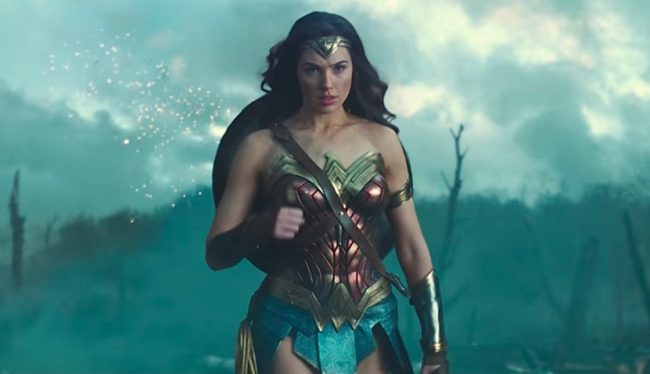 For every female protagonist in a mainstream movie or TV show, there will be a thousand people lining up to call her strong. When asked why she is a good character we should care about, they will say she is tough, and confident, and not at all like those weaker women of the past.

The backlash against the Strong Female Character isn’t anything particularly new, as proven by a brilliant 2015 article on this very site. What has been missing, though, is a solution to the problem. Female characters are still underwritten whether they’re in the background or pride of place on the poster, and many of us were pessimistic about Wonder Woman’s chances of changing that.

Thank Zeus we were wrong.

First, let’s define the Strong Female Character so that there’s no confusion. Maybe we can call her Joan. Joan is a good fighter, and she’ll prove this immediately in her very first appearance by spin kicking someone is the face. She doesn’t stand for your sexist nonsense, thank you very much, and is genuinely bemused by your attempts at humour.

Joan won’t show emotion when her love interest (the film’s star, because you can bet it isn’t her) is injured or incapacitated, and her own battle scars will extend no further than a dirty smudge on her cheek and a strategic rip in her impractical armour. Joan is boring, but Joan is strong.

For the very fact that the majority of audiences and higher-ups in the industry still respond to the term as a signifier of a film’s feminist credentials, Diana has been automatically touted as a Strong Female Character throughout Wonder Woman’s marketing and now, in its reviews. It’s a shorthand for saying that she can hold her own in a fight next to the boys, but fails to encompass anything else about her.

The main problem with this trope is that (mostly male) filmmakers have seized upon it so readily, and that the results are so restrictive and uninteresting. By making a character “strong,” it reduces her to a set of pre-approved traits that ignore the nuance of real human beings.

Superhero films are a good microcosm of the problem, as we have so many straight, white, male protagonists when compared to any variation on that default. There still aren’t any canonically LGBTQ+ heroes, and we’re waiting for a hero of colour to take centre stage (Black Panther can’t come soon enough), but now Wonder Woman has arrived to provide a counterpoint to the endless parade of ripped dudes on the cinematic slate.

Because there’s so much of the same, these guys can be actual characters without being shackled by the expectation that they will represent all men. Captain America and Iron Man can represent two sides of a political debate, Thor can be the redeemed Prince of Asgard and Bruce Banner can be the nerdy scientist with anger issues. Spider-Man can be plucky and Batman can be brooding and tortured.

They, too, exist within archetypes, but they’re all distinct from one another. In the past, filmmakers have failed to apply this same courtesy to female heroes because they equate such nuance with weakness. In some people’s minds, a flawed female character is a weak female character, and weakness is not feminist. Showing a woman to be maternal, or emotional, or naive wouldn’t do, so they must be strong and they cannot be anything else.

Wonder Woman sees this trope and it casually throws it aside, not giving it enough thought to address or subvert it and instead simply presenting Diana as she is, warts and all. When we meet her, she is hungry for action and the ability to fight for her people, and soon she is consumed by the desire to fight against the very concept of conflict during the first world war.

All of this, on paper, are the makings of your standard Strong Female Character, but alongside her physical abilities she is also childlike in her optimism, fiercely compassionate, and completely uninhibited by the social norms of the era. She doesn’t rail against those in her way because she is a woman, but rather because she doesn’t know any other way.

People have compared her to Christopher Reeve’s Superman for these reasons, but I’m going to go ahead and put her beside The CW’s Supergirl. In general, female heroes on television have fared much better than their big screen counterparts, mainly because it’s frankly hard not to flesh out your characters when you have 13-22 hours of screen time to fill.

Personally, I had a similar reaction to that much-discussed first trailer for Supergirl as I did to Wonder Woman’s stride across No Man’s Land in this film: tears of joy. Here was a bad-ass female hero who wasn’t great in spite of being a woman, but great because she is a woman. Kara Danvers is girly and silly and frets about dating boys. She is compassionate and understanding and sometimes too headstrong and idealistic for her own good. Sometimes she’s wrong, and she makes mistakes.

She’s me, and so many other men and women who’ve been told for decades that they shouldn’t indulge that side of themselves for risk of being dismissed.

Etta’s line about women fighting with their principles is played for laughs in Wonder Woman, but really that’s what Diana’s all about. She has the benefit of superpowers, but what sets her apart is the desire to use them to protect others and free them from oppression. She does fight with her principles, and the film embraces that side of her without question or condescension.

The lack of variety in our screen heroines has meant that when one comes along, she is saddled with decades of starvation and expectation. Yet, in 2017 it’s generally accepted that films like Catwoman and Elektra failed to catch on because they’re terrible, rather than because of the gender of their protagonists. It’s taken 76 years to get here, but Patty Jenkins and Gal Gadot have risen to the challenge.

Iconic characters rarely spring from bad or lazy films, and no matter what the Superman or Captain America haters say, unwavering heroism isn’t always synonymous with wooden or uninteresting. After such positive early reactions and buzz, this iteration of Wonder Woman looks set to be iconic, and she got there precisely because of the traits that don’t neatly fit within the archetype we’ve been handed for so long.

It’s not a spoiler to say that Diana Prince saves the world at the end of Wonder Woman. She does it because she has to, and because she is holding true to a belief system that has been challenged and reaffirmed over the course of the film. She saves her friends, she fights the bad guys, and she does it all with a defined personality and really great hair.