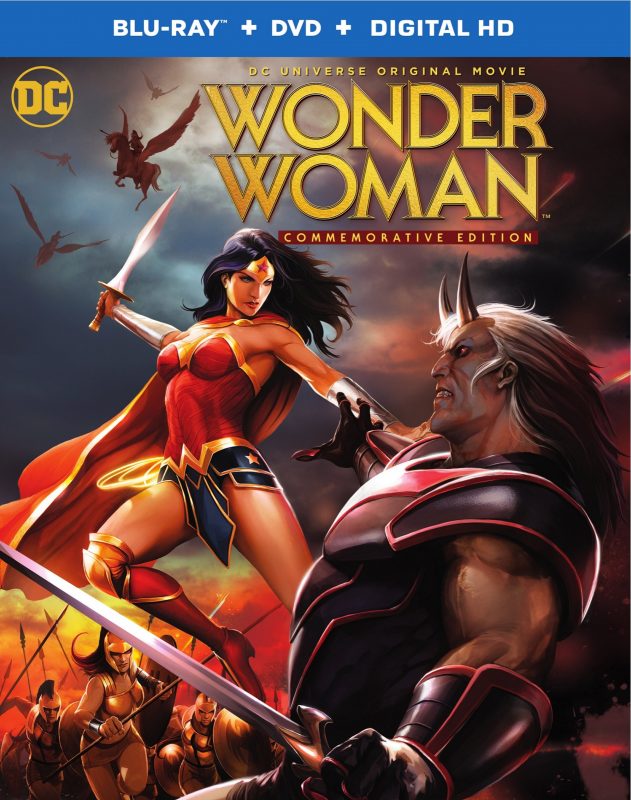 **Warner Bros. Home Entertainment provided me with a free copy of the Blu-ray I reviewed in this Post. The opinions I share are my own.**

DC continues to celebrate 75 years of Wonder Woman, and with the new live-action film coming up in less than a month, they’re tiding us over until then with an awesome re-release of 2009’s Wonder Woman animated film, starring Keri Russell as Diana of Themyscira.

“On the mystical island of Themyscira, a proud and fierce warrior race of Amazons have raised a princess of untold beauty, grace and strength – Diana. When U.S. fighter pilot Steve Trevor crash-lands on the island, the rebellious and headstrong Diana defies Amazonian law by accompanying Trevor back to civilization. Meanwhile, Ares (the God of War) has escaped his imprisonment at the hands of the Amazonians and has decided to exact his revenge by starting a World War that will last for centuries and wipe out every living being on the planet, starting with the Amazons. It is up to Diana to save her people and the world – by using her gifts and becoming the ultimate Wonder Woman!”

I already owned the film on DVD from when it was first released, and I thought it interesting to see the changes in presentation and marketing copy that has taken place in the eight years since. 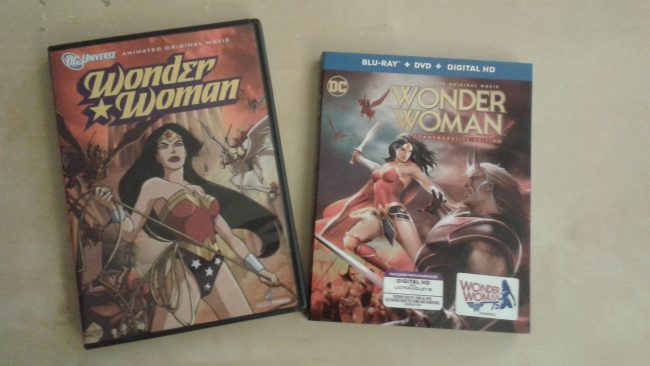 Whereas the original DVD box art simply used the art style of the film on the cover, the commemorative edition features a more epic, mythical art style, as if to emphasize Wonder Woman’s iconic stature. I do wish they hadn’t added Ares on the cover. On the DVD, Diana is front and center. The Blu-ray still has her in a position of power, but she’s also sharing space, which I wouldn’t have chosen for the cover of her namesake animated film.

The film itself is still a solid take on Wondy’s origin story. Keri Russell’s Diana is powerful, yet remains nuanced and relateable. And Nathan Fillion’s Steve Trevor is a hell of a lot of fun. The film is true to the character of Wonder Woman while also showing us that life as an Amazon isn’t as perfect as one might believe. Women are not a monolith, and “Paradise Island” isn’t necessarily paradise for everyone on it.

What makes this commemorative edition worth owning (in addition to an upgrade in format from the DVD version), are the special features. There are three really substantive featurettes on the disc:

“What Makes A Wonder Woman:” For 75 years, Wonder Woman has resonated with audiences because of her loving nature and quest for truth. Hear some of her biggest fans and fellow creators discuss how her qualities have crafted her into the icon we know today.

“Wonder Woman: A Subversive Dream:” A definitive look at a psychologist’ s dream, and the rich history of one of the pillars of DC Comics.

“Wonder Woman: Daughter of Myth:” This revealing documentary explores the archetype and tradition of the female DC Comics Super Hero.

“What Makes a Wonder Woman” damn near made me cry as it talked about how much this character has meant to generations of comics fans, no matter their gender. “Wonder Woman: Daughter of Myth” talks about the mythology that shaped her story, and is super-interesting.

“Wonder Woman: A Subversive Dream” is also really interesting, but it’s also a glaring example of how much further we have to go in our discussion of certain topics before we can achieve the truth Wonder Woman’s creator William Moulton Marston sought to pursue when he created the character (not to mention the polygraph test).

For example, the mini-doc dances around the fact that Marston was in a polyamorous triad with his wife Elizabeth, and another woman. It names Olive Byrne, but sums up the relationship saying that Byrne was the couple’s “assistant.” They mention the fact that Marston had a “big family,” but they don’t mention that the reason for that is that two of his five surviving children (there was an additional child of Elizabeth’s who died in infancy) were Olive’s. They don’t mention the fact that the three of them and their children lived together as a family, that elements of Wonder Woman were as influenced by Olive as they were by Elizabeth, and that the women continued to live together after Marston’s death.

And then there’s the bondage stuff. It’s framed in this doc as a “flaw” in Marston’s sincere feminism, and the focus is placed on all the times that Diana and other women are tied up in various ways. What they don’t mention is that there’s plenty of Wonder Woman having men in bondage (not to mention male villains having Steve Trevor in bondage) throughout the character’s history, and that this may have been due, in part, to Marston’s own possible identity as a male submissive.

A recurring theme in these otherwise fascinating documentaries about Wonder Woman talk about Diana’s greatest strength being the use of Truth as a weapon. I agree. Wonder Woman represents love, empowerment, and truth. I wish that these documentaries were capable of being a little more honest, especially since there are certain things they had to mention, lest Wonder Woman’s history be incomplete, but they couldn’t bring themselves to actually use the words, which is really sad.

Still, whether you’re a hardcore Wonder Woman fan, or someone coming to the character for the first time, this Commemorative Edition of Wonder Woman is worth a buy. There’s a lot of great information in here, even if it is incomplete.