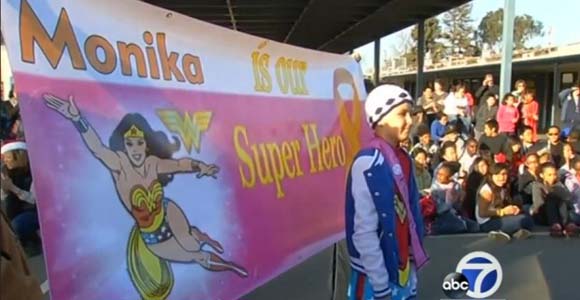 You remember the fun San Francisco (and everyone else) had with Batkid, right? Well the Bay area town of Vallejo recently celebrated another young individual by turning them into a superhero for a day. Everyone, say hello to Monika Romo, aka Wonder Girl.

The city of Vallejo in Solano County California may not have organized a city-wide villain hunt but they certainly made one 10-year-old’s day. Romo was diagnosed with leukemia in April, and while she’s still undergoing chemotherapy, her mom says she’s currently in remission. A non-profit group Vallejo Together wanted to do something special for a child dealing with the disease and with help from Supporting Our Cancer Kids and the rest of the city, they were able to put together a big surprise for Romo.

“We asked if she needed a Disney princess theme or something, but she doesn’t like Disney princesses, she likes Wonder Girl,” Vallejo Together founder Maria Guevara told ABC. “And we were like, ‘Oh my gosh, perfect setting, we’re gonna do Batkid-style Wonder Girl in Vallejo.’”

To celebrate, the group made it possible for her to visit several schools in the area. Turns out Romo wants to be a teacher when she grows up and they gave her the opportunity to try it out by teaching the essay she was asked to write about how a superhero could save the city. And she did it all while donning a Wonder Woman costume. Students at her own elementary school welcomed her with a specially planned dance (some also in superhero garb), received the Solano County Hero Award and the key to the city. Here’s an excerpt from her essay via Vallejo Together’s Facebook:

“One day the city of Vallejo changed unexpectedly. The evil villains had begun taking over Vallejo, spreading their evil ways across the town. Burglaries and robberies began occurring all over town, ‘respect for others no longer existed.” “Since everyone gave up and lost their hope, it made the villains’ job easier to take over Vallejo.”

“Then, a 10-year-old girl named Monika Romo had an idea. She told the mayor of Vallejo to call her favorite superhero, Wonder Woman …”

“Upon her arrival, Wonder Woman saw with great sadness what she had most feared. Cruelty, hate, anger and injustice had taken over the towns’ people. Many of the Vallejoans were willing to fight, but many others were too afraid to speak up, sometimes out of fear and sometimes just because they thought that nothing could be done.”

“They knew the job was not going to be easy and that it was something that would not happen over night. But they also knew that they had all their good will and the good intentions of many of the Vallejoans, and the support of the Police Department and the Fire Department.”

“Together, hand in hand, they would confront the forces of evil, because they truly believed that the unity would make them a stronger force.”

To add more awesome on the awesome pile, “Wonder Girl” also captured the essence of Wonder Woman in one simple sentence. Her mother Allejandra Romo told the local CBS station, “She said Wonder Woman is the perfect superhero to compare me with because we’re both fighting for a cause.”

Meet #WonderGirl (aka Monika)! She's following in the footsteps of Batkid, helping to defend Vallejo for a day. pic.twitter.com/3i183bmgHw