Here’s What Happened at the “Women of Trek Fandom” Panel at Star Trek: Las Vegas!

"Ma'am" will do in a pinch, but they prefer "captain." Female fans have played key roles in Star Trek fandom since there first was Star Trek fandom. Women were the driving force behind some of the earliest Star Trek conventions and wrote some of the earliest Trek reference books. In 1968 Bjo Trimble became “The Woman Who Saved Star Trek” when she and her husband spearheaded a letter-writing campaign to save the show from cancellation. It’s hard to imagine where fan culture would be today without all the decades of (mostly) women writing Star Trek fanzines and creating fan art, and even giving us the term “slash” fiction. And among the women who were early Trek fans, there were also those who engaged with their fandom through critiquing the show they loved and its representation of female characters.

Walking the floor at Star Trek: Las Vegas, the world’s largest Star Trek convention, you can see the tradition of active female Trek fans is alive and well. This year’s “Women in Trek Fandom” panel, hosted by Mary Czerwinski of DVD Geeks and Glue Guns and Phasers, was a chance to reflect on how far we’ve come and what still needs to happen to achieve equality in fandom, as well as in terms of on-screen representations and behind-the-camera roles. 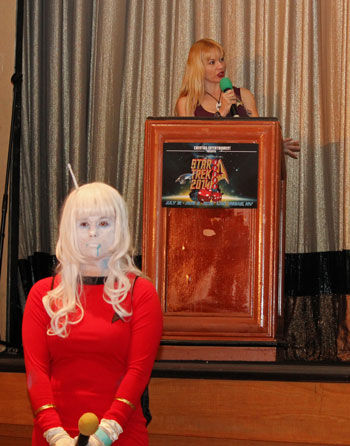 I was really thrilled to get to be on the panel for a second year, along with returning panelist Dr. Kayla Iacovino of TrekMovie.com, and Asia Demarcos, who plays Lt. Marlena Moreau in the fan series Star Trek Continues. Cosplayer Karine Marois, dressed as an Andorian zombie, managed the mic in the audience.

Czerwinski kicked the convention off with some stats about women as consumers and women in geekdom, as compiled by GeekGirlCon. Almost as soon as people in the audience heard about the strong numbers of female fans and their collective purchasing power, they had things to say about problems that still exist.

One woman talked about the days when you couldn’t find any T-shirts fitted for women in the dealers’ room, and she and her friends had to buy men’s T-shirts and alter them at home. Another fan commented things aren’t that much better today for clothes for geek women (the main exception being Ashley Eckstein at Her Universe). She noted most of the vendors selling higher-end uniforms are mostly catering towards men. “One told me they just don’t really keep things in stock for women,” she said, “And yet they want my money.”

“I think merchandise is important,” said fan Heather Barker after the panel, “We’re the ones spending the money but I can find more on Etsy than at an actual convention.”

With so much audience participation, a great conversation that touched on everything from our favourite female villains to how Trek fares on the Bechdel Test, to the need for LGBT characters on Trek, to the numbers of women behind the scenes.

“I didn’t realize there were so few women behind the scenes. I was really surprised by it,” said Connor Bright, the Glue Guns and Phasers co-host.

But the panel made sure to celebrate the women who were there. Czerwinski shouted out D.C. Fontana for her pioneering writing on TOS, as well as super-fan Bjo Trimble.

“Jeri Taylor, when she worked on TNG, that was when the female characters got a lot stronger,” acknowledged Demarcos, referring to Taylor’s work as a supervising producer, and then co-executive producer. When Taylor came on board, she talked explicitly about one of her goals being to improve the roles for Counselor Troi and Doctor Crusher.

Another issue that got the audience involved was shared frustration over the Star Trek Into Darkness Alice Eve underwear scene. “It upsets me greatly that when you Google ‘Carol Marcus,’ you get the pantie shot. It reduces the character,” said Barker.

Another young fan in the audience was raised on an Army base, and was particularly upset about the way the reboot women’s uniforms don’t have any rank insignia. “On a base you learn to identify people by their rank insignia. What would they do if there was a disaster on the Enterprise? How would they know who’s in charge if you can’t tell what the women’s ranks are?” she said.

“It was great that people in the audience were speaking about the issues they encountered themselves,” said Iacovino. Czerwinski agreed: “I was really impressed with how engaged the audience was and how supportive they were, in particular, of gay and lesbian characters and characters of diverse ethnicities in Trek.”

Czerwinski felt another highlight of the panel was the discussion of moving beyond just representation; that is, not just having more women or more people of color in token roles, but having more of a range of roles open to them too. “I asked the room to envision a Trek series where there are three main characters – like we had with Kirk, Spock and McCoy – and envision all three being women and asked whether they’d watch that. Overwhelmingly people said they’d be interested,” Czerwinski said.

Jarrah Hodge is a feminist blogger from Vancouver, B.C. She runs the award-winning, multi-author feminist blog gender-focus.com, and she analyzes Star Trek from a feminist perspective over at her other blog, trekkiefeminist.tumblr.com. You can also find her on Twitter @jarrahpenguin.