The Women Of Conan The Barbarian, Better Than You Might Think 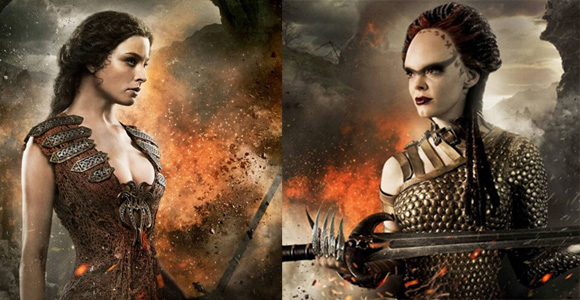 I’ll be honest, the only reason I was going to see the recent reboot of Conan the Barbarian was for its star Jason Momoa. Thanks to his time on HBO’s Game of Thrones, he’s now someone I follow (not in a creepy way). I wasn’t really a fan of the 1982 Conan and I had no illusions the film would be anything but a male-pandering, bloody escapade with lots of bared breasts. What I was surprised to find out was it was an excellent depiction of strong female characters. And lots of bared breasts.

Conan was created by writer Robert E. Howard in 1932 and featured in a series of fantasy stories in Weird Tales magazine. The character – a Cimmerian, son of the village blacksmith – lives to seek revenge on a conquering war lord but spends most of his time getting into fights and sleeping with tavern wenches. In that regard, the modern take is precisely the same with two standouts.

Rachel Nichols character Tamara is depicted in the film as a “pure blood.” One’s thoughts immediately jump to “typical virgin sacrifice character” but this is actually not the case. In fact, Tamara is a student at a monastery who is the pure blood decedent of the sorcerers of Acheron. The bad guy, Khalar Zym, needs her blood in order to release their ancient power for his nefarious purposes. Ok, fair enough, but Tamara is far from a helpless damsel, which is a delight to see. She’s not a trained warrior with expert moves either but she does know a few and defends herself when she needs to instead of shrinking into a corner and waiting for a man to come and save her. And she does this on several occasions throughout the film. She even winds up saving Conan’s life a few times.

Rose McGowan (rumored to be playing another Howard character, Red Sonja, for some time) plays Marique in the film. She’s the sorceress daughter of Khalar Zym and while she yearns for her father’s attention and approval, is really the one with all the power. If not for her, Zym would never have found the pieces of the puzzle he was looking for. In fact, he would probably have bit it early in the film if it wasn’t for Marique using her sorcery to beat Conan in their fight. Even as a child she looked like someone you wouldn’t want to mess with.

Is Conan perfect in its depictions of women? Unfortunately no. At one point, Tamara is tied up and gagged by Conan for attempting to run away and talking too much. This actually stick out as an eye sore in a film where the females, including Conan’s own mother, are incredibly independent. There are still those nameless, half-naked slaves/wenches who are there for the taking. None are taken by force but yes, their only reason for existing is for the main character to have sex with, though we never see this happen on screen. Conan’s only on screen sexual liason is with Tamara. She isn’t “taken” by him either but seeks him out and he’s the one who gets left alone in bed the morning after.

Although I don’t consider Conan a great film and it played out pretty much how I expected to, I really was happily surprised by their depictions of their major female characters. That was certainly not something I was expecting. Are feminists going to flock to see the movie? Certainly not, but in my mind, it’s at least a positive example to point to of how women can and should be shown on screen.

If you want to see for yourself though, the movie is out on blu-ray and DVD on November, 22.