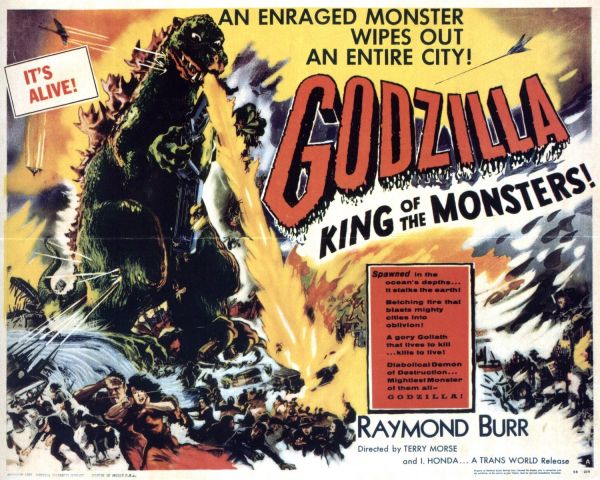 ALERT! ALERT! BIG MONSTER APPROACHING! Preliminary reports indicate that we are dealing with Patriarchas, and it’ll take nothing less than the most dashing, courageous and diligent Japanese Self-Defense Force pilots to bring this whopper down!

Guillermo Del Toro’s Pacific Rim took the world of fandom by storm. Despite predictably starring a white guy, it was Rinko Kikuchi’s Mako Mori who sparked the imaginations of fandoms worldwide. Her take-no-guff attitude and the platonic relationships she developed with her two male co-leads for a breath of fresh air in a blockbuster landscape where women all too often are relegated to being sexy lamps (*coughTransformerscough*).

A year later, Hollywood offered audiences another round of giant monster-mashin’, but those enamored with Mako’s adventures were probably a bit let down with Gareth Evans’ Godzilla. Although it earned enough money to quickly secure two sequels, its levels of representation were a bit… off. The three women in the 2014 Godzilla exist to respectively a) get fridged, b) look at a TV set all worried-like, or c) tell us that Ken Watanabe is super right, you guys. Why even hire powerhouses like Juliette Binoche, Elizabeth Olsen and Sally Hawkins if that’s what you’ll have them do? Sure, it was probably a nice and easy paycheck for all three ladies involved, but damn it, Godzilla movies should be better than this!

Wait, what? That’s right! There’s quite a few classic Godzilla movies from Japanese mother studio Toho that have either non-traditional gender role fulfilling female protagonists or side characters (though, in fairness, also quite a few featuring eye-roll inducing fainting damsels and the like). Let’s check ‘em out!

Now, you may feel a slight trepidation at jumping into a series that spans sixty years and thirty movies. You may trepidate even more at the thought of starting it at random! What kind of madman would recommend an entry from 2000 if the series proper started in 1954?? In theory, I could tell you there are three eras of Godzilla, named after the Japanese eras in which they were predominantly made: Showa (1954-1975), Heisei (1984-1995) and Millennium (1999-2004)*.In theory. The reality is that there’s little to no continuity from film to film. The Showa and Heisei films are separate continuities on paper, but only the Heisei ones have some form of throughline (as in, recurring characters not called Godzilla). The Millennium films even go so far as to be officially separate from one another, each and every one only acknowledging the original ’54 Gojira as the only other movie in their little continuity.

If we were to put it bluntly:

Awesome as it sounds, Japan has never actually known a “Millennium era.” In fact, we’re still in the Heisei era, historically, but Toho just needed a clear delineation between their latter two Godzilla series. With this lumbering atomic monster of a preamble in mind, which Zillas should you check out for some giant monster action that puts the representation of women in Godzilla (2014) to shame? 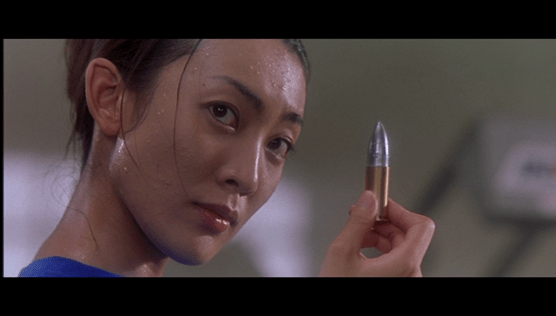 1.)    Godzilla vs. Megaguirus (2000) The second of the Millennium films has Godzilla fighting a swarm of insects that ultimately combine into a huge dragonfly/scorpion hybrid monster. Besides featuring one of the coolest fighting moves in any Godzilla movie (won’t spoil it), GvM also boasts one of its coolest main characters: Lt. Kiriko Tsujimori (Misato Tanaka). Kiriko lost her friend and commanding officer in a previous attack on Godzilla. Why they were attacking this skyscraper-sized lizard on foot and armed with rocket launchers, I don’t know, but it does make for a pretty awesome scene. This tragedy puts Kiriko in vengeance mode, and she’s basically Lady Ahab for the rest of the movie. In a truly badass series first, Kiriko is the only person to ever physically climb Godzilla and plant a tracker on him. 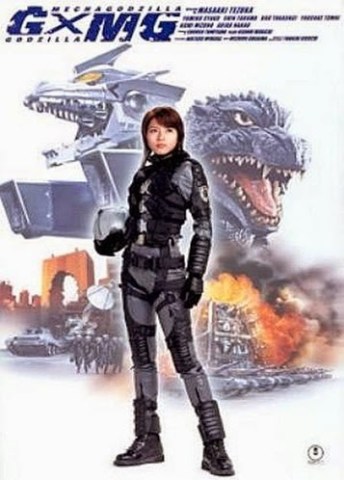 2.)    Godzilla Against MechaGodzilla (2002) Though the title makes it sound like Godzilla is writing a sternly worded missive to his elected National Diet representative regarding the government’s proposed switching to a MechaGodzilla-only based defense plan, GAMG is actually filled with some kick-ass robot-on-monster violence. This film marks the third incarnation of the robot version of Godzilla. In the Showa era, MechaG was a weapon employed by the suspiciously primate-looking aliens of the Third Planet of the Black Hole system. In Heisei days, MG was a government weapon built from the scraps of a defeated cyborg villain from a previous movie. But for Millennium-style MG, Toho would whip up the coolest origin of all: a robot built over the bones of the 1954 Godzilla. Whoa.

Our lead here is the first lady mecha-pilot of the series (though the Heisei MG had a female co-pilot) with yet another Godzilla-induced personal trauma. Unlike Kiriko, however, Akane Yashiro (Yumiko Shaku) is reviled by her colleagues because of a bad judgment call during an anti-Godzilla raid which caused the death of quite a few soldiers. She finds solace in her conversations with Sara (Kana Onodera), the young daughter of a technician, who lost her mother to Godzilla and is currently flipping burgers (??) at the base. This new MechaGodzilla project (dubbed “Kiryu”) could very well be the thing to restore Akane’s honor and get her out of her funk!

Though Millennium films were all stand-alone, GAM had a direct sequel in the form of Tokyo SOS. While a lovely film filled with kaiju feelz (no, really!), Shaku only briefly reprises her role as Akane in it. This is because Toho often used Godzilla movies as testing grounds for actors, only for them to be given “more serious” projects down the line if audiences responded well. 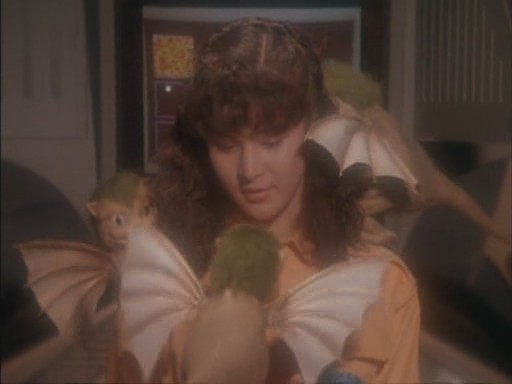 3.)    Godzilla vs. King Ghidorah (1991) In some ways, Akane is actually the second female mecha-pilot in the Godzilla series. GvKG’s Emmy Kano (Anna Nakagawa) is part of a Futurian (a person from the future… yeah, I know) delegation come to offer aid to 1991-era Japan. By removing Godzilla from the timeline with their advanced machinery when he was still a pre-mutated Godzillasaurus (yeah…) on the WWII Pacific theater, the country will not suffer the losses it has, and will become a superpower in the 23rd century. It would be a spoiler to say exactly how this results in Emmy becoming the (sssssort-of) first female mecha pilot of the series, as it’s a fun twist best kept for first viewing. Bonus hilarity: Android M-11 (Robert Scott Field) is a prime example of Toho getting the worst possible white actors for their movies. His dime-store Terminator act should amuse children of all ages!

4.)    Godzilla vs. Biollante (1989) Though Biollante is one of the few kaiju in the series explicitly gendered as female, this film actually warrants an entry because of Miki Saegusa (Megumi Odaka). This young telekinetic appeared in all but one of the Heisei films (the exception being the 1984 kick-off The Return of Godzilla), usually in a supporting role. Biollante is her first appearance, and also pretty much the coolest she got over the course of the series. Unfortunately, subsequent writers didn’t really know what to do with her and relegated her to a person behind a viewscreen going “I sense Godzilla is in pain…” or some such. In Biollante – the finest of the Heisei films, incidentally – she actually gets to contribute to the plot and, in a series first (and last), fight off Godzilla single-handedly with her psychic powers. Miki, we hardly knew ye!

5.) Mothra (1961) / Mothra vs. Godzilla (1964) / Godzilla vs. Mothra (1993) Is Mothra cheating? It’s probably cheating. I like Mothra though, and I promise you’ll like her too! The only other kaiju of the series presented as female besides Biollante, Mothra’s pop culture footprint is almost as big as Godzilla’s. The guardian of Infant Island, she battles not only bullies like the G-man and Battra, but was also the very first of Toho’s kaiju to be portrayed as more than a destructive force (of nature or otherwise). Her fairy ambassadors, the Mothra twins, relay her wishes and fears to our astonished human protagonists, making her the most talkative kaiju of all, to boot. And if all that wasn’t enough, she’s got a groovy theme song that is used in-universe to summon her.

Yup, Mothra has it all… except for plot variation! True, there’s only so many tales of giant monsters you can tell, but Mothra’s unique life cycle really limits writers’ options. With this in mind, tread carefully! Mothra vs. Godzilla repeats many of the same beats of the originalMothra, with added random Godzilla in there. GvM, on the other hand, manages to mix it up slightly with dark twin Battra and his mysterious motivations.

Now go hit the Netflix or the Amazon to get that giant monster fix, if you are so inclined! They may be cheesy, they may be silly, but Toho’s Zilla/Mothra movies have a lot of heart, and are currently a billion to one when it comes to female representation with regards to their American counterparts.

Luca Saitta co-wrote Memories of Monster Island, a humorous journey through the Godzilla movies, blogs at Wholly On The Level, and tweets like a baby Rodan @servantofdagon.