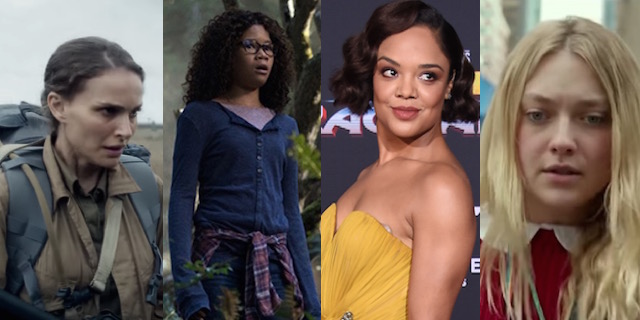 It’s a new year, with a whole new slate of movies to be excited about. 2017 saw a growing number of female-led films, but since women aren’t a passing trend, that doesn’t look to be slowing down. Here are some of the films we’re excited to see this year. Some we’ve talked about a lot already; others have just recently landed on our radar. Let us know below what you’re excited about this year.

Dakota Fanning stars as a young woman with autism, on a mission to deliver her Star Trek spec script to Hollywood. This one hits theaters and VOD later this month.

Based on the book by Jeff VanderMeer and directed by Alex Garland (Ex Machina), Annihilation follows a group of women exploring some sort of mysterious military-and-maybe-supernaturally-or-something-protected area. Those women are Natalie Portman, Jennifer Jason Leigh, Gina Rodriguez, Tuna Novotny, and our light of lights Tessa Thompson.

Does it look like a flat-out rip-off of Black Widow? Sure it does. And yes, the sexy, seductive spy thing is a bit played out. But I can’t help but hold out some hope that this Jennifer Lawrence vehicle is the smart espionage thriller the book (written by a former CIA operative) was said to be.

I don’t know much about this movie, other than the combination of Charlize Theron and Diablo Cody is cinematic gold. (If you still haven’t seen Young Adult, go ahead. I’ll wait.) There’s no trailer yet, but Theron stars as a mother of three who is gifted the services of a night nanny by her brother. “Hesitant to the extravagance at first, Marlo comes to form a unique bond with the thoughtful, surprising, and sometimes challenging young nanny named Tully,” played by the incredible Mackenzie Davis.

A decade after Ocean’s 13, this franchise has a new sequel, this time starring Sandra Bullock (as Danny Ocean’s sister) and seven other badass women: Mindy Kaling, Rihanna, Cate Blanchett, Helena Bonham Carter, Anne Hathaway, Sarah Paulson, and Awkwafina. Yes, you might say we are excited.

I am honoured to be on set today playing #TheWasp on what would be Jack Kirby's 100th birthday.
.#ThankYouJackKirby #AntManAndTheWasp pic.twitter.com/EBsV8jTK34

We loved Ant-Man but our biggest gripe with the movie was that there was seriously not enough of Evangeline Lily’s Hope van Dyne. We’re extremely excited to see her finally take on the Wasp mantle.

A Wrinkle in Time

The Spy Who Dumped Me

This is another one I don’t know too much about, other than that it stars Kate McKinnon and Mila Kunis. If that’s not enough to hook you, it’s also written and directed by Susanna Fogel, who made the criminally underseen Life Partners, starring Leighton Meester and Gillian Jacobs a few years ago. The two women embark on an undercover mission after Kunis’ character finds out her ex is a spy. It costars Hasan Minhaj, Justin Theroux, and Gillian Anderson. I’m willing to give that cast a shot at anything.

No, not the 2014 Nightingale starring David Oyelowo, and not the 2019 Nightingale about WWII France. This Nightingale is from Jennifer Kent, the writer and director of The Babadook. Set in 1825 in the British penal colony now known as Tasmania, the film centers on a female convict seeking revenge on the soldier who killed her family.

2018 is set to be the year of Tessa Thompson, as she currently has seven projects in various stages of development. In Furlough–which is a comedy–she plays a woman who lives with her aging mother (Whoopi Goldberg) and works at a prison part-time. She’s assigned to accompany a prisoner (Melissa Leo) on an emergency furlough to visit her dying mother and the trip “does not go as planned.”

This isn’t a remake, it’s a sequel set 25 years after the original. With new music and a co-starring role from Lin-Manuel Miranda, and Emily Blunt taking over the role of Poppins, we can’t believe we have to wait all year for this one.

Anna and the Apocalypse ()

This teen zombie Christmas horror comedy musical was a massive hit at Fantastic Fest in 2017. There’s no news yet for a full cinematic release, but we’re not giving up hope for a zombie-filled Christmas 2018.

Release date: Keep your fingers crossed for December of this year

UPDATE 1/11/18: Orion Pictures has officially acquired Anna and the Apocalypse for a holiday season release of this year!