I'm just assuming that every bridge in Europe has a resident troll. 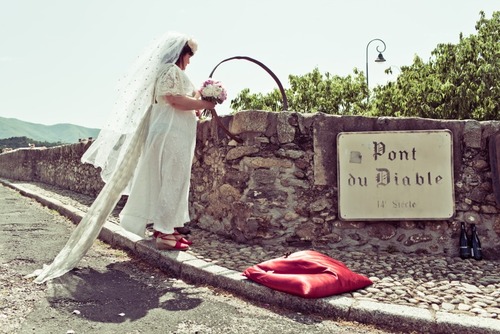 Australian artist Jodi Rose is really into bridges — so much so that she’s spent the past decade travelling all over the world recording the vibrations in bridge cables and incorporating the sounds into her “Singing Bridges” music project. Apparently she enjoyed Le Pont du Diable‘s song most of all because on the 17th of June, she held an intimate marriage ceremony where she and the 600-year-old French bridge became, well, bridge and wife. Let’s hope it’s an open marriage, because judging from her CV she’s probably not going to stop seeing other bridges.

Le Pont du Diable, which translates to “The Devil’s Bridge” in French, was first erected in the 12th century and has stood firm  in Céret over the river Tech ever since. It is one of many bridges in France referred to by that name, and one of several “Pont du Diables” in Hérault alone. Guess it’s like the bridge equivalent of being named Guillaume in France: Weird sounding, but surprisingly common.

According to the website Jodi put up for the wedding — let’s face it, it’s 2013 and every wedding party has their own website — her decision to marry the bridge was more symbolic than anything else. “While I respect those whose romantic and sexual feelings are oriented towards objects, mine is a symbolic affair, a pagan / animist view of the spiritual vibration in everything,” she wrote. “He understands that I love other bridges — and men — ours is a love that embraces the vagaries of life, as materialised in the swirling currents of the river that flows beneath his magnificent body.”

That didn’t stop her from going all out for this joyous occasion, of course. While the ceremony was small, with only 14 people in attendance, Rose wore a custom bridal gown and veil, and commissioned rings for both her and the bridge. 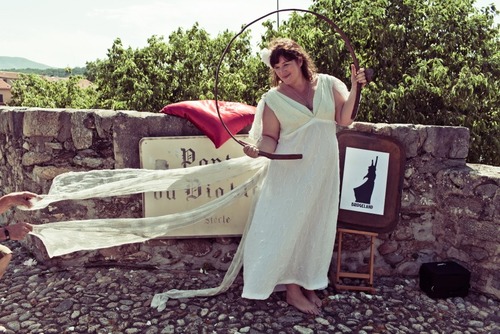 Well, it’s less of a “ring” and more of a giant unconnected brass hula hoop, but it’s still adorable.

Rose also chose a thematically appropriate wine (called Le Maudit, or “The Damned”), and invited all her guests to stay at basically the most amazing hotel we’ve ever seen. The mayor of a nearby town,  Arles-sur-Tech, also attended the event, because the French will never pass up an opportunity to open a bottle of wine. Ever.

Speaking of women marrying bridges — you ever notice how when women marry inanimate objects, they’re usually large structures like the Berlin Wall or the Eiffel Tower, but when men marry inanimate objects, they tend to be cars or sex dolls or pillows with anime characters on them? I bet there’s a stand-up routine in there somewhere. Or, at the very least, a postmodern feminist grad student thesis. Someone get on that.

Correction: Updated facts. Apparently we all got the wrong bridge because there are about a spillion of them, but Jodi Rose herself set us straight. Thanks!