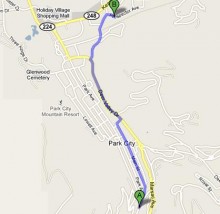 Some people just can’t follow directions. Others, like Los Angeles native Lauren Rosenberg, follow directions a little too well. On January 19 she needed directions for her walk in Park City, Utah. She used her Blackberry to search Google Maps for the directions. These directions happened to contain a half-mile stint down “Deer Valley Drive,” also known as “Utah State Route 224.”

Being a highway, Deer Valley Drive has no sidewalks or pedestrian paths to speak of. Instead of seeking an alternate route, Rosenberg walked down the middle of the highway and was unsurprisingly struck by a vehicle. She is now suing Google for $100,000 in medical expenses along with punitive damages. She is also, more sensibly, suing the man who ran into her, Patrick Harwood of Park City, Utah. The pedestrian may always have the right of way, but here I almost feel bad for the driver.

Here’s the perspective from Rosenberg’s complaint filing on how exactly Google is to blame for all this:

“As a direct and proximate cause of Defendant Google’s careless, reckless and negligent providing of unsafe directions, Plaintiff Lauren Rosenberg was led onto a dangerous highway, and was thereby stricken by a motor vehicle, causing her to suffer sever permanent physical, emotional, and mental injuries, including pain and suffering.”

Were the directions shitty? Yes. But was Google negligent in the matter? It really doesn’t seem that way. First of all, you shouldn’t need Google to tell you that walking down the middle of a highway is a bad idea. But more pertinent to the point, Google makes clear on its map site that walking directions are still full of kinks:

Walking directions are in beta.
Use caution – This route may be missing sidewalks or pedestrian paths.

Here’s where the case gets interesting: While this shows up on a computer, it doesn’t show up, apparently, on handheld devices. Whether this consitutes negligence will be up to the court, but it really seems that Google has done enough that only those devoid of some integral facet of common sense could go astray with its directions. Sarah Jacobsson points out in the PC World article that Google is full of directions that don’t work with common sense. Primarily: “Kayak across the Pacific Ocean.”

But we probably shouldn’t even point that out, because next thing you know, someone will attempt to do so just to get their hands on some of Google’s money.

Update: TechDirt has gotten more info from the original source, who talked with Rosenberg’s lawyer. Apparently, it was very dark out and Rosenberg assumed there was a sidewalk across the street.