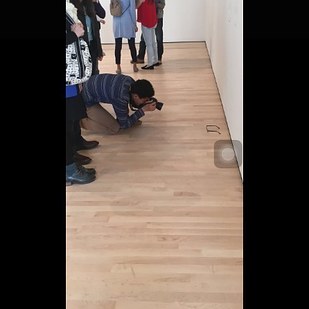 17-year-old TJ Khayatan was hanging out with some friends recently at San Francisco’s Museum of Modern Art, when he noticed some of the pieces weren’t as elaborate as he’d expected them to be. Khayatan told Buzzfeed News, “upon first arrival we were quite impressed with the artwork and paintings presented in the huge facility. However, some of the ‘art’ wasn’t very surprising to some of us. We stumbled upon a stuffed animal on a gray blanket and questioned if this was really impressive to some of the nearby people.”

The group decided to put a pair of glasses on the floor, apparently to see if other visitors would give the glasses as much attention as they were some of the similarly minimal pieces. Soon people began crowding around and taking pictures of the group’s creation:

LMAO WE PUT GLASSES ON THE FLOOR AT AN ART GALLERY AND… pic.twitter.com/7TYoHPtjP8

The group of friends also put a hat on the ground and stared intently at a museum garbage can, but neither of those pieces attracted as much attention from visitors.

Since Khayatan shared the images of the glasses to Twitter, the pictures have gone viral, and the group of friends has been featured in countless publications both local and international. The 17-year-old told Buzzfeed that although many people have found the pictures funny, he doesn’t think all modern art is a joke: “I can agree that modern art can be a joke sometimes, but art is a way to express our own creativity. Some may interpret it as a joke, some might find great spiritual meaning in it. At the end of the day, I see it as a pleasure for open-minded people and imaginative minds.”