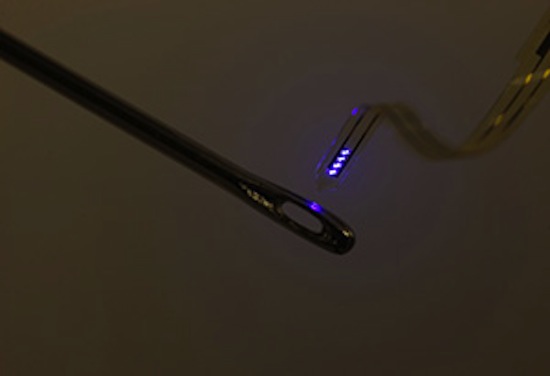 Researchers from the University of Illinois and University of Washington have developed a wireless implant that uses LEDs thinner than a human hair to produce light, stimulating their test subjects to create dopamine, a chemical released in the brain during pleasant experiences. By manipulating specific neurons in the brains of their lab mice, the researchers hope to develop a more accurate map of the circuits in the brain associated with sleep, depression, anxiety, and even addiction.

The implant is the latest neat piece of gear in the optogenetics toy chest, where it could no doubt be easily lost. The implant is small enough to fit through the eye of a needle, and its nanoscale lights are so precise they can target individual neurons and make them release that sweet, sweet dopamine, therefore making accepted methods of producing dopamine (doing drugs, finding true love, winning a contest, doing drugs again) obsolete — at least for the lab mice in question.

Still, don’t expect to get a light-controlled happy pill of your own anytime soon. Optogenetics requires that the brain cells of subjects be genetically altered to be susceptible to manipulation by flashes of light. By studying the effects in mice, though, researchers hope to make more accurate maps of the neurons involved in certain functions, and what the minimum number of neurons stimulated to get a given response might be, moving us one step closer to a world in which scientists can manipulate individual neurons in your brains, because that’s not terrifying at all.

(via University of Illinois, image courtesy of John Rogers/Michael Bruchas)