Dinosaurs Developed Feathers to Pick Up Chicks, Not Fly 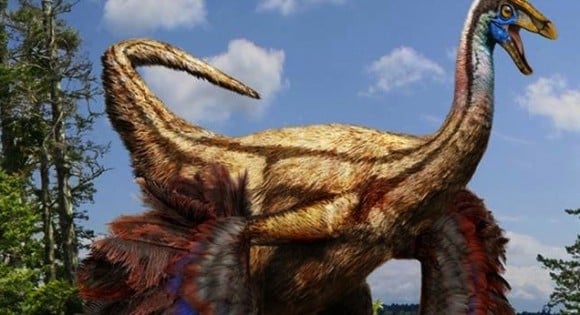 We already knew that Dr. Grant was right in thinking that dinosaurs evolved into birds. But recent discoveries indicate that dinosaurs developed wings much earlier than previously thought, and that these early wings weren’t used for flying, but for attracting mates. So kind of like peacocks, then. Deadly, deadly peacocks.

A team of scientists led by geoscientist Darla Zelenitsky came to this conclusion after examining the fossils of three Ornithomimus edmontonicus specimens dating from about 70 million years ago. O. edmontonicus look like ostriches but weren’t thought to have feathers…until Zelenitsky and her team found traces of filaments that match up to known winged dinosaurs, which don’t show up in the fossil records until millions of years later.

Ornithomimosaurs are fairly large, so their wings wouldn’t have been used for flight. And because the two adult specimens appear to have had more-developed plumage than the juvenile specimen, the feathers were probably involved in the reproduction process somehow, whether in brooding or attracting dinosaurs of the opposite sex. (Or same sex. We won’t judge.)