These two take "ride or die" to a whole new level. 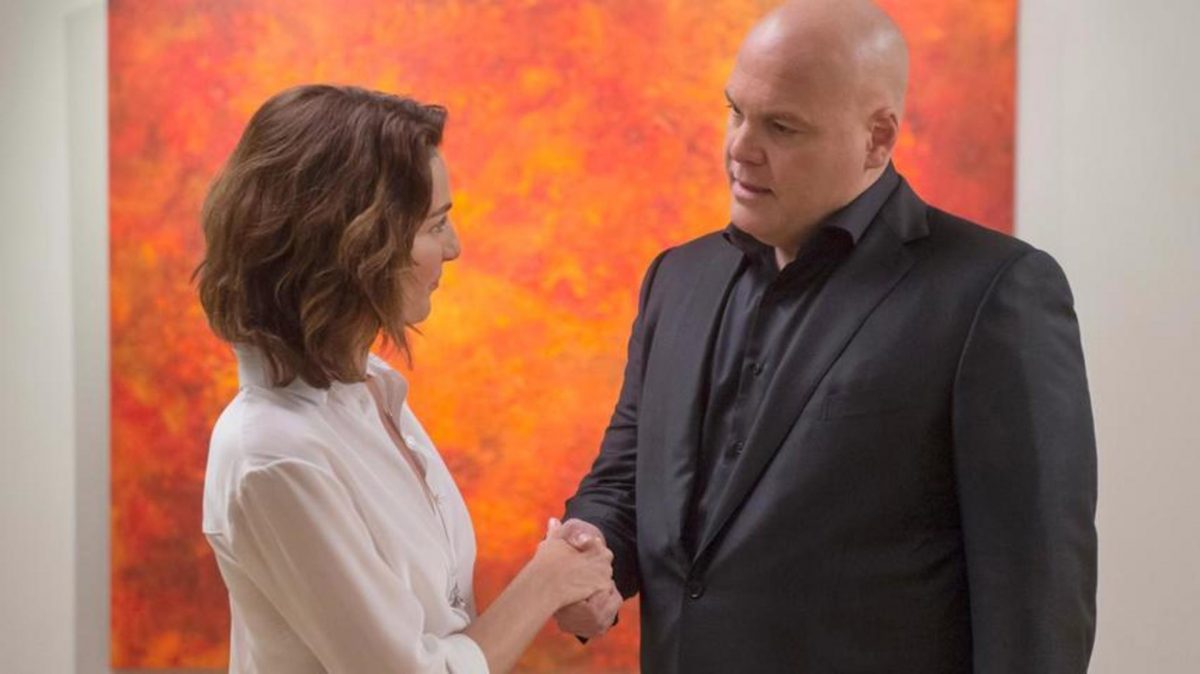 There are a lot of things the Marvel Cinematic Universe does well, but romance isn’t one of them. This is not to say that we don’t all have our Marvel ships and fan favorite couples. But, given the nature of the superhero genre, romance is never centered in the narrative. These are action films first and foremost, where plot mechanics and stylish set pieces take precedence over smaller character and relationship moments.

Which is why it’s so refreshing that the final three episodes of season three of Daredevil focus on the slow burning relationship between Kingpin Wilson Fisk (Vincent D’Onofrio) and his fiancee Vanessa Marianna (Ayelet Zurer), culminating in their lavish wedding. Naturally, the medium of television gives you more time to build character relationships and romances, but no MCU relationship has had the passion and intimacy of Wilson and Vanessa.

On the surface, this relationship shouldn’t work. Wilson Fisk is a brilliant, controlling sociopath, and characters like him usually don’t get to have love because they can only love themselves. Their first date ended with Fisk decapitating a guy’s head in a car door, which is, shall we say, a rough start. But at every turn, at every red flag, Vanessa rises (or sinks?) to the occasion. She is not content to be aplaything or a gangster’s moll. She brings a gun on their second date because she knows exactly who Wilson Fisk is. And reader, she is in.to.it.

The best relationships rely on mutual understanding and open communication, which these two have in spades. Vanessa accepts Wilson’s evilness, and their only big disagreement comes when she demands to be included in all aspects of his life, even the murdery ones. She wants to be an equal to Wilson, not another piece of art he collects. Wilson listens to her complaints and quickly agrees to bring her behind the curtain.

When Wilson brings Vanessa down to his secret spy lair, he is expecting her to be horrified. How will she feel about Wilson monitoring all of Hell’s Kitchen through security cameras? Completely nonplussed, she pulls up a chair and jumps right into the thick of it, easily convincing Wilson to murder Agent Nadeem instead of discrediting him.

Now, this is not to say that either Wilson or Vanessa are good people: they’re absolutely evil and soulless. But man are they perfect for each other. Vanessa helps Wilson to focus his rage by giving him something to fight for. She is his reason for getting out of jail, and for setting in motion the events of the third season. Protecting her becomes Wilson’s moral code and guiding mission. He is no longer the lonely boy who murdered his father with a hammer.

Before their wedding, Wilson and Vanessa sit in his closet, and Wilson tells her that he fears he doesn’t deserve her, and that he is irreparably broken. She responds by saying, “Don’t you understand? We’re all broken. The point is to find the person whose broken pieces fit with yours.” Long live the Kingpin and the Queenpin.