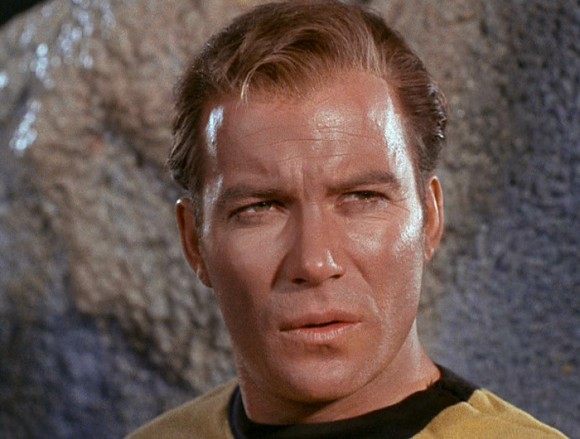 Back in 2009, a scene that featured a holographic cameo appearance by William Shatner‘s Captain Kirk in the Star Trek reboot was revealed without an explanation as to why it wasn’t included in the film. But now, co-writer Bob Orci is telling everyone why the cameo was ultimately cut from the final script: it was seen as 1. not powerful enough and 2. “pandering.” Hmmm. We have the scene here so you can judge for yourself.

When asked at a round table discussion with The Hollywood Reporter if there were ever scenes that were written but not used, Orci responded:

We wrote a scene for William Shatner at the end of the movie where Spock, played by Leonard [Nimoy], gives his young self, played by Zach Quinto, something he’d kept with him. And it was basically a recording of Kirk singing “Happy Birthday” to him for the last time before he went off to die in Star Trek VI. J.J. [Abrams] had determined early on that he felt it might seem like it was, a) too small, and b) pandering to the fans a bit. But we wrote it anyway because as a fan you’re always trying to protect that thing where you want to be able to look fans in the eye and say, “We were ready.”

TrekMovie has actually obtained a copy of the script for this scene, known as “Alternate Scene B,” which was never even seen by Shatner and would have created a completely different version of the scenes involving Spock Prime and Spock. There is also no time stated for Kirk’s recording, but it would have been faithful to the Star Trek canon.

Here is the entire scene:

SPOCK PRIME
Then I ask that you do yourself a
favor… put away logic, and do what
feels right. The world you’ve inherited
lives in the shadow of incalculable
devastation… but there’s no reason you
must face it alone.

And from around his neck, he removes the PENDANT that
until now, we’ve only caught glimpses of. Places it on
the table beside his younger self. The feeling in his
eyes is profound…

SPOCK PRIME (CONT’D)
This was a gift to me. Representing…
a dream. One we were unable to fulfill.
(softly)
The way you can now.

And moves to the door. Stops. Offers the VULCAN SALUTE:

SPOCK PRIME (CONT’D)
As my customary farewell would appear
oddly self serving, I will simply say…
good luck.

Their eyes hold. Spock turns, disappearing into the
corridor. Young Spock stares at the empty doorway a
beat, his mind a jumble of thoughts. Looks to the
pendant… and realizes it’s a HOLO-EMITTER. After
considering a beat, he hits an activation button and a
MOVING HOLOGRAPHIC MESSAGE materializes before him:

KIRK/ SHATNER
Happy birthday to you, happy birthday to
you…
(stops, grins)
I know I know, it’s illogical to
celebrate something you had nothing to do
with, but I haven’t had the chance to
congratulate you on your appointment to
the ambassadorship so I thought I’d seize
the occasion… Bravo, Spock — they tell
me your first mission may take you away
for awhile, so I’ll be the first to wish
you luck… and to say…
(beat, emotional)
I miss you, old friend.

… and we’re PUSHING IN on Young Spock, taking in the
image of Kirk’s future self, the message, but above all —
the clear, unquestionable friendship these two men had…

As Spock Prime walks off down the corridor, he passes
right by a man conferring with a nurse — the man pauses,
turns… it’s SAREK. Suddenly overcome by a feeling that
the stranger who’s just passed him is… oddly familiar.

KIRK/SHATNER (V.O.)
I suppose I’d always imagined us…
outgrowing Starfleet together. Watching
life swing us into our Emeritus years…

MUSIC BUILDING — glass walls reveal THE ENTERPRISE at
dock, UTILITY CRAFTS floating around it, repairing.
Standing at attention in rows, THE ENTERPRISE CREW —
over four hundred of them wearing DRESS UNIFORMS — TRACK
DOWN the faces, all proud:

KIRK/SHATNER (V.O.)
I look around at the new cadets now and
can’t help thinking… has it really been
so long? Wasn’t it only yesterday we
stepped onto the Enterprise as boys?
That I had to prove to the crew I
deserved command… and their respect?

And we STOP ON YOUNG KIRK. Composed, focused, proud. A
man. And to every fan’s delight, finally wearing his
YELLOW SHIRT. The FEDERATION COMMANDANT stands at a
podium:

COMMANDANT (CONT’D)
Your inspirational valor and supreme
dedication to your comrades are in
keeping with the highest traditions of
service and reflect utmost credit to
yourself, your crew, and the Federation.
By Starfleet Order 28455, you are hereby
directed to report to Commanding Officer,
USS Enterprise, for duty as his relief.

Kirk turns. Walks to… PIKE. In a wheelchair now,
wearing an ADMIRAL’S UNIFORM. Overnight, his hair’s
turned totally grey — but despite his trauma, his
pride’s overwhelming. They SALUTE each other:

KIRK
I relieve you, Sir.

PIKE
… I am relieved.

He opens a BOX in his lap — glorious in repose, a MEDAL:

PIKE (CONT’D)
And as Fleet Admiral, for your… unique
solution to the Kobayashi Maru, it’s my
honor to award you with a commendation
for original thinking.

Pike containing a smirk, pins the medal to Kirk’s
chest…

Kirk turns to the crowd. Eyes shining. WILD APPLAUSE.
OUR MUSIC SOARS. Bones leans in to Sulu, rolling his
eyes:

As Kirk rejoins his crew for hugs and congratulations, we
go to the BACK of the hangar… SPOCK PRIME. Watching.
Moved beyond words. He turns and leaves them to it… as
he goes…

Our montage comes full circle as we END on Kirk’s
transmission:

KIRK/SHATNER
Who’s to say we can’t go one more round?
By the last tally, only twenty five
percent of the galaxy’s been chartered…
I’d call that negligent. Criminal even —
an invitation. You once said being a
starship captain was my first, best
destiny… if that’s true, then yours is
to be by my side. If there’s any true
logic to the universe… we’ll end up on
that bridge again someday.

Stops, grins. Because this is the part he needs to say
most…

KIRK/SHATNER
Admit it, Spock. For people like us, the
journey itself… is home.

Young Spock’s face. Lost in feelings that flood through
him.