A Wil Wheaton you're allowed to sleep with! | The Mary Sue

Ever Wanted to Sleep With Wil Wheaton? Well, Now You Can! 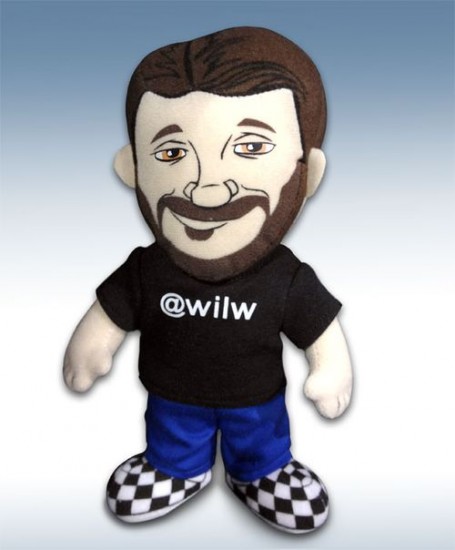 In plushie form that is! Haha! Had you fooled! But, I am sorry if I disappointed anyone. I will admit, there is something about that beard. That beard and that cheeky little smirk of his. You know exactly the one I’m talking about. The one that says, “You know you love me.” Believe me, Mr. Wheaton, I do. But, it seems like I’m getting away from the point at hand, which is that you — one of the scores of loyal Wheaton fans — can preorder and soon own a real-life and official Wil Wheaton plushie!

Everything we’ve ever been waiting for is here! We have been given the chance to own a tiny version of the Star Trek: The Next Generation actor, internet celebrity, and über geek, Wil Wheaton; I can tell you right now where 20 of my hard-earned dollars are going: Right into the pocket of Wheaton’s blue jeans. According to WWdN: In Exile, the idea for the plushie came from a dare Wil gave to his friend, Joel Watson, to design a plush Wheaton. Joel drew a picture of this wee Wheaton (which you can see on Mr. Wheaton’s blog) and many chuckles and guffaws were had between the two gentleman. But then, they got to thinking, what if this became a reality? A reality that would make money?

You can preorder the plushie here! Also, while you’re at it, why don’t you check out Joel Watson’s Webcomic, HijiNKS ENSUE. It has funny words and pretty pictures. Now, head over to that link and preorder your official Wil Wheaton plushie, complete with the cheekiest of smirks.

(via WWdN: In Exile)

Relevant to your nice, clean interests