How to Convincingly Deliver Technobabble | The Mary Sue

How to Convincingly Deliver Technobabble 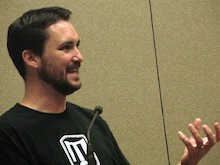 In a recent blog post, actor and writer Wil Wheaton, who plays a brilliant (non-lethal) weapons scientist on Syfy’s Eureka, and who, we have noticed, often winds up playing geeky characters, muses on the difficulty of delivering technobabble as an actor.

The problem with technobabble — the pseudoscientific expository dialogue that may sound silly and make sticklerish fans fume, but is often crucial to setting up the scene and advancing the plot — is that it’s important, and the character delivering it is probably an expert on its content, but it’s difficult for an actor to actually emote or, well, act when delivering it, which is why technobabble is often delivered in a rote manner.

Here was Wheaton’s “Eureka” moment: [I deeply apologize for that sentence]

As I did my preparation, I realized that while the technobabble is just a dump of information, it’s information that Doctor Parrish has an opinion about. The function of the scene is to get the action going and give the audience some important information, but that doesn’t mean it has to be an infodump. The way Doctor Parrish feels about the other characters affects the way he talks with them regardless of the words. It affects who he chooses to give certain bits of information to, and it affects how he delivers the information. So I found ways to be emotionally connected to the scene and the characters, while caring about the information I was giving them, so it wasn’t an infodump. A scene that could have been tedious and boring became a scene that was a lot of fun to perform.

It honestly could have been boring and exhausting to spend much of a day delivering technobabble, but when I realized that I could keep it interesting by endowing the technobabble with emotional resonance, the whole thing came to life in a surprising and unexpected way. It was like I’d detected anomalies in the starboard neutrino emitter, and instead of adjusting the warp plasma induction subroutine to compensate for multiadaptive fluctuations, like you’d usually do, I thought about it, and equalized the portable phase transmission with a self-sealing warp core transmuter.