The vast majority of contributors to Wikipedia are male, according to a New York Times piece that studied the user-curated site. Not only that, but the “female-oriented” entries are generally shorter and less comprehensive than those authored by men, “for men.” Really? What, exactly, determines what women are interested in, and did the NYT really make fair comparisons? Um, no. That is the answer.

I’m not denying that there is evidence of a lack of female Wikipedia contributors — less than 15 percent of its hundreds of thousands of contributors are women — and surely, there should be an effort to try to encourage more female input.

But the examples being cited are just off-base, unfair, and humorously fixed to prove a point. The comparisons being made are more than a little ridiculous.

A topic generally restricted to teenage girls, like friendship bracelets, can seem short at four paragraphs when compared with lengthy articles on something boys might favor, like, toy soldiers or baseball cards, whose voluminous entry includes a detailed chronological history of the subject.

With all due respect to friendship bracelets, how much can possibly be said about them? I took a look at this “woefully scant” Wikipedia entry and learned pretty much all I needed to know about friendship bracelets, including over a dozen different varieties and their Native American background. Great. Is this entry smaller than that for toy soldiers? Indeed it is. But why are we comparing something some young teenage girls wear to something that is not only played with by young boys as well as adolescent boys, and then also collected by adult males? To say nothing of the females young and old who might appreciate toy soldiers?

How about this comparison:

Is a category with five Mexican feminist writers impressive, or embarrassing when compared with the 45 articles on characters in “The Simpsons”?

And then there’s the obligatory “women like Sex and the City, why aren’t they writing about it” comparison:

The entry on “Sex and the City” includes only a brief summary of every episode, sometimes two or three sentences; the one on “The Sopranos” includes lengthy, detailed articles on each episode.

Even the most famous fashion designers — Manolo Blahnik or Jimmy Choo — get but a handful of paragraphs. 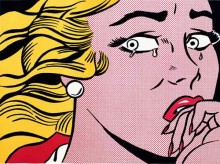 Say. It. Ain’t. So. Well, I’m just gonna roll up with some Midol and chocolate and cry myself to sleep over this, but only after I complain about men for 47 minutes while calling myself fat.

The only explanation I can think of for the gender disparity of Wikipedia’s contributors is that men are simply fanboys for more things than women are and are more apt (and available) to spill their emotions onto Wikipedia. Are there fangirls? Absolutely! You think I can’t write the most comprehensive guide to The Lonely Island that you’ve ever seen? Pssshhhht, I could write a book on those dudes. (For money.) Maybe it’s a primitive instinct — men trying to show off their knowledge as if it were a competition. One theory expressed in the article is that women are still demurring to men when it comes to expressing their opinions. That could be true. I’m not equipped to answer this without more research, probably on Wikipedia.

But again, my beef is not with the statistics, which are disappointing. It’s the research:

Ms. Gardner, citing an example that resonates with her personally, pointed to the Wikipedia entry for one of her favorite authors, Pat Barker, which was a mere three paragraphs when she came across it. Ms. Barker is an acclaimed writer of psychologically nuanced novels, many set during World War I. She is 67 and lives in England.

By contrast, Niko Bellic had an article about five times as long as Ms. Barker’s at the time. It’s a question of demographics: Mr. Bellic is a character in the video game Grand Theft Auto IV; he is 30 and a former soldier.

Really, NYT? I suppose you’re going to tell me that the entry for Star Wars (loved by “loud,” “stupid,” “attention-starved” boys … and some girls too) is bigger than the article for Madeleine L’Engle. It is? Travesty! Injustice! Mysogyny!