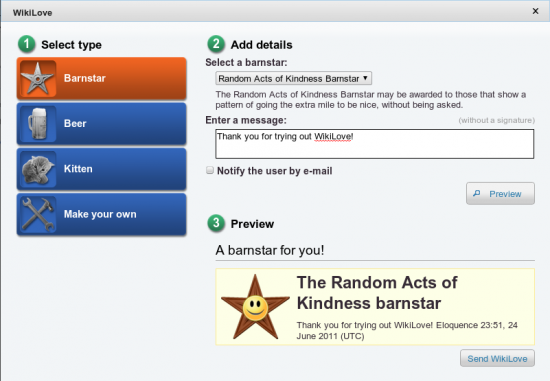 In an effort to retain new editors, Wikipedia is planning to launch a new system through which newbie editors can be praised for their work. The initiative is called Wikilove, will be rolling out as an experiment on the English version of the site on June 29. While most of us take Wikipedia for granted, we don’t always see the sometimes excruciating battle of wills that goes into most articles. For new editors, it can prove so daunting that they chose to leave the community.

Wikilove aims to make new editors feel valued and welcomed in the tight-knit and occasionally cut-throat world of Wikipedia. In their semi-annual review, Wikimedia discovered that the life of a new editor is primarily dominated by learning, criticism, and warnings. From the Wikipedia blog:

The drive for quality and reliability has led to the development of sophisticated automation mechanisms that aid in socializing new users to Wikipedia’s norms, policies and conventions. The act of expressing appreciation for other users, by contrast, is a largely manual effort.

With Wikilove, editors can send trophies like “barnstars” and notes of appreciation to other editors. Whether or not the system will be used, or sufficient to smooth over hurt feelings because of a brutal re-edit is yet to be seen.

(I Programmer via Slashdot)