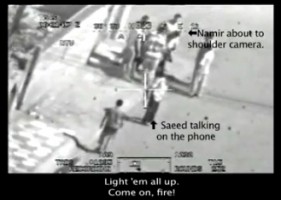 WikiLeaks has released a video of US military personnel killing 12 individuals in Iraq, two of whom were later revealed to be Reuters staff members. They label the video an “indiscriminate murder,” although the actual fact pattern is considerably more complex, as the troops in the video were following military procedure and seemed to honestly mistake the photojournalist’s camera for an RPG.

Warning: the following video is graphic in nature.

In the past few weeks, the Pentagon has been waging battle on a whole new front: classified information that ends up on the Internet. A primary target this brave new war is a website called WikiLeaks is a website that, according to the NY Times, is viewed as a real threat to national security, according to the Pentagon. Now we have a much clearer understanding of why they consider WikiLeaks a threat.

In the following video, US military personnel in an Apache helicopter gravely mistake a group of Iraqi men for insurgents (what appears to be a camera is viewed by those in the helicopter to be a RPG.) Warning: the video below is graphic in nature.

The video is presented thusly by Wikileaks:

WikiLeaks has released a classified US military video depicting the indiscriminate slaying of over a dozen people in the Iraqi suburb of New Baghdad — including two Reuters news staff.

Reuters has been trying to obtain the video through the Freedom of Information Act, without success since the time of the attack. The video, shot from an Apache helicopter gun-site, clearly shows the unprovoked slaying of a wounded Reuters employee and his rescuers. Two young children involved in the rescue were also seriously wounded.

Read Mediaite’s analysis of the Wikileaks video — which does not reflect our own, but which we think is worth the read — here. –Ed.