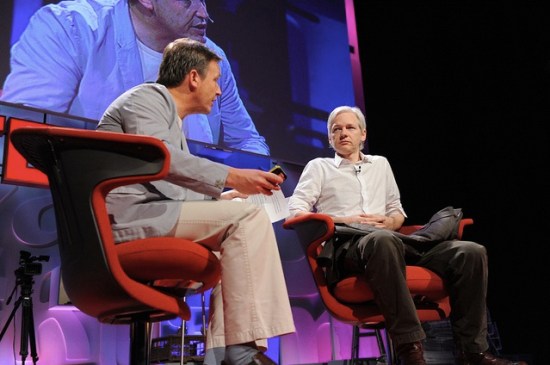 While on the run from U.S. authorities, WikiLeaks Editor-in-Chief Julian Assange still has the time to have a chat with TED moderator Chris Anderson. This past Friday, the director of the whistleblower site made a surprise appearance in Oxford to discuss the past accomplishments of WikiLeaks, the details of its secretive operation, and his own motivations in creating the organization.

The WikiLeaks talk comes not soon after a rumor that the website was to be abandoned; the TED video, the reopening of WikiLeaks’ submission page on Saturday, and the organization’s implied contribution to the Washington Post’s “Top Secret America” report released earlier today, clearly indicate otherwise.

Despite a more visible role in the media since the leaked 2007 video of a Baghdad airstrike, the 39-year-old Assange is a notoriously inscrutable character; it’s uncertain how much of his biography is fact and how much is fiction. Born in Queensland, Australia, he was reportedly enrolled over 37 schools and on the run from a cult his mother believed Assange’s stepfather belonged to. Additionally, he was a hacker from a young age, writing Strobe, the first free and open source port scanner in 1995. Supposedly self-taught and widely read in the sciences and mathematics, Assange studied physics and mathematics at the University of Melbourne until 2006, when he founded WikiLeaks.

We particularly enjoyed his nonchalant answer of “yes” when asked by TED curator Anderson whether WikiLeaks had changed the world. Assange also observed: “It’s a worry, isn’t it, that the rest of the world’s media is doing such a bad job, that a little group of activists is able to release more of that type of information than the rest of the world’s press combined.”

Assange also acknowledged the fundraising struggle WikiLeaks has faced in the past. In January 2010, the site only consisted of only five full-time staff–impressive, considering the site is responsible for processing over 1.2 million leaked documents–and its only revenue stream comes from donations. Though the organization was the highest-rated finalist for a half million dollar grant from the John S. and James L. Knight Foundation, WikiLeaks was ultimately not selected. Hopefully that the site has begun accepting submissions again is an indicator of renewed financial support.

This and more in the interesting video of Assange and Anderson below: