Nintendo Makes A Real Wiimote: The Wii Remote Plus 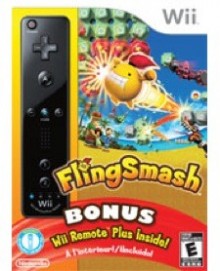 The general consensus from gaming media after the release of the Wii MotionPlus accessory has been favorable.  The only problem, most would agree, is that the little addon’s superior motion tracking abilities weren’t packaged with the standard Wiimote from launch.  Why put out a control system based on motion tracking when the motion tracking isn’t really good enough to chart one-to-one movements?

Well, there’s good news and bad news.  The good news is, Nintendo is making a Wii Remote Plus, a wiimote (seriously, why is this word not the official jargon yet?) with the MotionPlus capabilities built in.

The bad news is that you’re going to have to buy it all over again.

The new controller will be packaged with FlingSmash, an Angry-Birds-type paddle-ball/block-destruction game that releases on November 7th (presumably it will become available as a stand alone product at some later point).  FlingSmash is currently listed for pre-order on Amazon at a $50 price point, which basically means you’re paying $10 more than you would for a regular controller, and getting a game that you may or may not actually wind up playing.

We know all this because of a Gamestop listing (since taken down) that shows the new controller along with the FlingSmash box art (it also explains why a casual little thing like FlingSmash would have a $50 asking price).  Nintendo has also confirmed the existence of the Wii Remote Plus before, but they have not yet commented on the device’s appearance alongside FlingSmash.