How Did Wiffle Ball Trademark the Color Yellow? 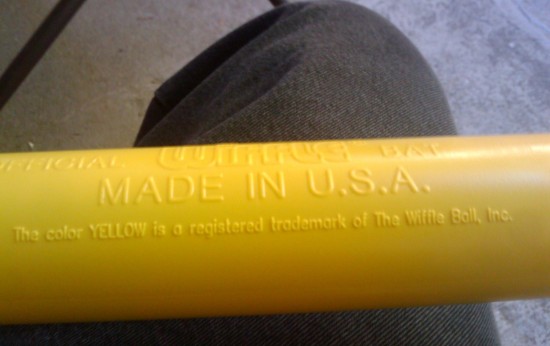 We recently came across a photo that’s apparently been circulating the Internet for a little while now, which depicts a Wiffle Ball bat that says “The color YELLOW is a registered trademark of The Wiffle Ball, Inc.” No, the pic isn’t Photoshopped; yes, The Wiffle Ball, Inc. has trademarked the color yellow, in a fashion, although you needn’t be afraid of eating corn-on-the-cob or growing dandelions. So what does it mean, exactly?

In short: Intellectual property law in the US and in many Western countries allows for the trademarking of colors in specific commercial settings. In its 1995 decision on the case of Qualitex Co. v. Jacobson Products Co., Inc, the U.S. Supreme Court unanimously ruled that if colors have a secondary meaning in the marketplace, if in themselves the colors have taken on the function of helping to “identify and distinguish [the seller’s] goods . . . from those manufactured or sold by others and to indicate [their] source,” in the language of the Lanham Act, then they can be registered as trademarks.

Thus, Wiffle Ball can trademark yellow, UPS can trademark brown, and Cadbury can trademark purple; however, these trademarks offer protection in the sub-marketplaces in which the color might cause confusion over the manufacturer. A rival chocolate company couldn’t legally wrap its bars in Cadbury purple; however, if you want to paint your car the same purple, you’re good to go.

SSJR is pleased to announce that it has obtained approval of a trademark application for the color yellow as applied to plastic bats for its client, the Wiffle Ball, Inc. (“WBI”) of Shelton Connecticut.

SSJR submitted voluminous information proving to the USPTO that consumers have come to recognize yellow plastic bats as products associated with WBI. The evidence collected included news stories, entries in books, and even a clip from the television program about famous toys. Registration of the color yellow in this way will help WBI protect its considerable goodwill in the marketplace by prevent the distribution of counterfeit yellow bats.

Believe it or not, Wiffle Ball, Inc. got its start in 1954 making wooden bats; it wasn’t until 1959 that they started making yellow plastic bats, although they continued to concurrently produce wooden bats until 1972. Ironically, the New Jersey Wiffle Ball Association says that the most valuable type of Wiffle Ball bat is a wooden Yugoslavian counterfeit, only 8,000 of which were made before they were confiscated by Wiffle Ball, Inc., but which the company then proceeded to sell “as regular bats under their trademark.” These bats go for between $250 and $500 a pop.

Today, the threat to the company’s domain over the color yellow is more likely to come from China than from the former Soviet bloc: They probably wouldn’t be too happy with the yellow bats in these two assortments. We rather doubt, though, that they’ll climb to quite the same value.