Crazy Ex-Girlfriend: Sadness, Showtunes, and Why You Should be Watching

Crazy Ex-Girlfriend makes me feel a lot of things. 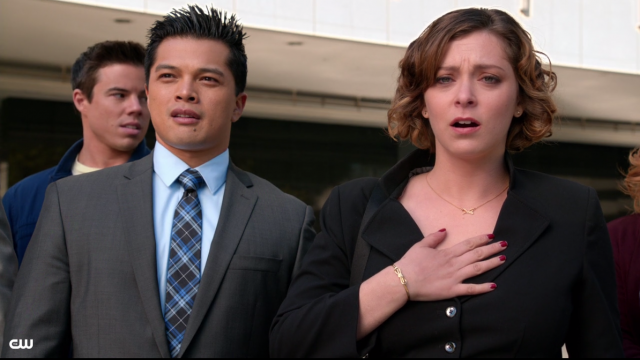 This year, The CW has seen its critical acclaim continue on a strong upward rise, with fan favorite series such as The Flash, iZombie, and Jane the Virgin all making good on their strong debut seasons with consistently strong second years. Joining this already impressive slate is the sing-song friendly Crazy Ex-Girlfriend, which is so much more than that title would suggest.

I want to have it out with the people in charge of naming shows that greatly disservice the quality behind them. It’s what delayed me from starting iZombie, what took audiences away from Trophy Wife and Cougar Town, and to my utmost lasting frustration, is what killed Selfie way, way before its time. After being picked up for a second season despite low ratings, Crazy Ex-Girlfriend has dodged that bullet, at least for the time being. While I’m sure its leading lady winning a Golden Globe for her performance doesn’t hurt their chances, I would like to think that the people behind the scenes recognize the gem they have on their hands.

There is so much that Crazy Ex-Girlfriend has done remarkably well throughout the entire season from a strictly storytelling perspective, showcasing an unabashed focus on progressive points of view and plot lines. Rebecca’s main love interest is Filipino (not the norm on television) and the dialogue calls out internalized sexism and the double standards women have to live with compared to men, particularly in terms of their appearance.

One of the newest and most buzz-worthy developments has been Daryl, Rebecca’s boss, coming out as bisexual as he starts a sweet courtship with White Josh. What’s particularly great about it is that—rather than use it as power play (as has been the case in shows such as Mr. Robot and House of Cards most recently) or succumb to the erasure of the B in LGBTQIA as so many people seem to do—the show has embraced the new characterization while also making sure that the audience doesn’t get the wrong idea of who the character is and has reasserted what it means to be bi in an empowering and definitive way.

All of this makes for some phenomenal storytelling that has been simply a pleasure to watch with the stylish showtune gusto the series has, but Crazy Ex-Girlfriend wouldn’t be nearly as biting or curious if it weren’t for its leading lady, Rebecca, played with a deceptive mix of cotton candy sweetness and realistic cynicism by Rachel Bloom. 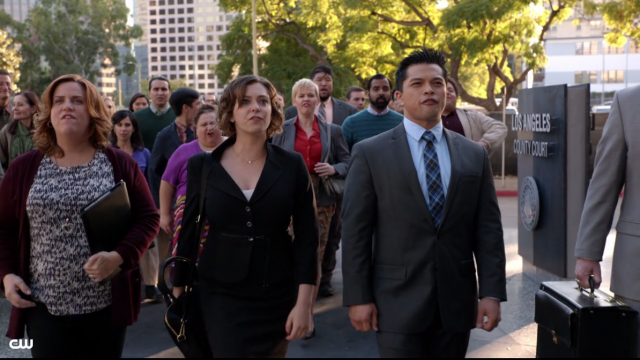 In the past year or so, we’ve seen a surge of dramatic storytelling through comedy measures. We saw it with shows such as You’re the Worst, Please Like Me and Bojack Horseman and now we’ve seen the addition of Rebecca in Crazy Ex-Girlfriend. The series begins with her having a nervous breakdown in New York, where she’s on the fast track to success with a side of cardiac arrest when she sees an old flame, the aforementioned Josh. This leads to her recalling simpler times and when she last felt truly happy. Inspired by his appearance (as well as some strong feelings that spring to the surface due to it), she packs up her life and moves to West Covina, California, hoping to find the happiness and inner peace that she couldn’t find in the suffocating hustle and bustle of the city.

Rebecca, by her very nature, isn’t always a likable character. She’s ill informed on how the real world works, practices some light stalking to gain Josh’s affections, and can lie to herself along with everyone around her, typically to her own detriment. What separates her from the rest of the crowd of troubled TV leads is two aspects:

Much has been written about how her depression has played out (beautifully), and I undoubtedly believe it’s something to celebrate—anything at all to lessen the taboo of mental illness, thanks. What the show does so remarkably well is ground her issues in a shocking realism, as the world around her is so heightened—all vibrant colors, sunny atmosphere, and the show is even ushered in by an opening with animated singers.

Juxtapose that with Rebecca as she gets ready for a date, as she lies dejected on her couch, or much more poignantly, sits on the floor of her home, shattered glass at her feet as her fantasy counterpart sings a song so full of toxic self-loathing it’s hard to watch.

Now, I can’t say that I have ever sneaked into someone’s home to delete a text (although I can add my name to a list of people who have definitely sent a text to someone who decidedly shouldn’t have gotten it). However, boy is it easy to understand that feeling of uselessness after self-sabotaging. The dawning realization that you only have yourself to blame for something going terribly wrong in your own life is a startling one, and how it can be a gateway to more, incessant self-doubt is not a melodious walk in the park. Crazy Ex-Girlfriend nails this empty feeling, and it does so with an appropriately bleak and crude fantasy showtune number.

Self-delusion has been an omnipresent theme of the series throughout its entirety, but it never makes it less painful to watch play out. Rebecca isn’t a perfect character, but she’s a relatable one who stands out in a slightly heightened universe as someone that the audience can latch onto. Her sadness and insecurities are recognizable, and while it’s important to celebrate female heroes and antiheroes alike (and trust me, I do both), it’s as equally exciting to watch and support a female character who has attributes I can identify with.

Rebecca sucking in and then frowning in the mirror while the uncomfortable Spanx don’t prove to be an instant fix? Rebecca starting a fad diet which jump starts a fad new outlook on life? All of this based on one insomnia filled night? The realization of how tough it is to make new friends in your mid ’20s?

I could go on. When the characters aren’t breaking into song and dance, they are living real lives, with real concerns and consequences, and it’s a welcome change of pace. There’s only one episode left of the series, and it’s been an excellent and eccentric ride of a first season. It’s a show so confident in its tone that it’s easy to declare it as “one of a kind.” Rebecca is lovable in her own, troubled way and is the perfect, messy representation of how superb this show is.