Why Olenna Tyrell Wins The Game of Thrones

A golden rose, growing strong? Oh, yes, that strikes fear in the heart! 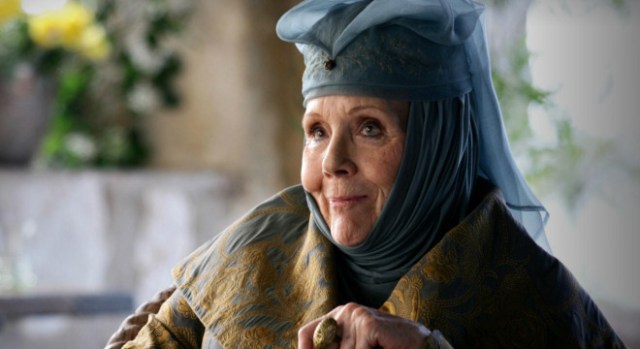 Warning: Major spoilers for season four of Game of Thrones.

If you watch Game of Thrones, you’ve probably heard a lot said about the female characters on the show and George R.R. Martin’s portrayal of women and politics overall. Characters like Cersei, Sansa, and Daenerys get analyzed from every angle, while we hear so much about how Varys, Littlefinger, and Tywin Lannister are the political animals to watch in King’s Landing. Yet one woman often gets overlooked in the discussions about women making an impact on the battle for the Iron Throne.

They say that in the Game of Thrones, you either win or you die. In the case of Lady Olenna Tyrell, you can instead flourish to a ripe old age and become the wiliest, canniest mover and shaker in King’s Landing.

The dame of House Tyrell is a powerhouse of an older woman, a no-nonsense matriarch who helps maneuver her family into position to rule. On television, she’s a smiling, fascinating politician (played by the fantastic Diana Rigg) who uses her protected position as the grand dame of the Tyrells to place her family carefully beside the Iron Throne. When she smells a whiff of King Joffrey’s sadistic behavior, not only is she unwilling to put up with her granddaughter being married to the little monster, she takes steps to do what nobody else in King’s Landing seems willing to consider and becomes the stealthiest kingslayer around. Along the way she tries to rescue Sansa Stark from her horrible position as Joffrey’s abuse toy and spends her afternoons playing verbal joust with Tywin Lannister over everything from politics to the economics of ruling a kingdom. This makes Lady Olenna arguably one of the most successful characters on Game of Thrones. It also presents her as one of the best representations on television of a woman who maintains her competency in her later years.

The changes made to Lady Olenna by the showrunners when they adapted her from the books only succeeded in making her a more nuanced, powerful political animal. While plenty of changes from the source text have muddied the portrayal of some characters (see: the recent Jaime/Cersei rape debacle), the changes to Lady Olenna instead stripped away some of her more cliché aspects. In the books, Lady Olenna Redwyne (aka the Queen of Thorns) is described as a more stereotypical old lady character, a tiny woman with stinking breath and no teeth who claims both to be half deaf and slightly senile as a cover for her political machinations. Martin plays up the familiar old woman stereotypes and then has Lady Olenna use them to her advantage as she maneuvers around the younger political animals of the series. After all, nobody would suspect the hard-of-hearing, absent-minded old lady of regicide, would they? Of course not. Pay no attention to the cackling old woman in the corner. Book!Lady Olenna is the wise old woman, ugly and unpleasant, a typical fairytale archetype tossed on its head, written brilliantly but potentially a little too on the nose to be really revolutionary.

By comparison, Diana Rigg’s Lady Olenna Tyrell is a fashionable breath of fresh air in every scene she’s in. Rigg’s portrayal wipes away the idea of the unpleasant old woman of the books and focuses instead on Lady Olenna as a playful and loving matriarch, a woman whose iron nerve and political brilliance are a genuine match for Tywin Lannister’s every step of the way. This has brought us some of the best scenes of the past seasons as Tywin and Olenna get into cranky fights over everything from the cost of the Joffery/Margaery wedding to how broke Westeros is and everything else under the sun. The exceptional sniping between these two old political animals would not have been possible if the show had written Lady Olenna as a half-deaf, cranky curmudgeon. Instead, we’re given an elderly woman character written to reflect the power that years of experience and wisdom can bring, a woman ready to toss out sage wisdom in the same breath as a joke about her sex life. This portrayal presents Lady Olenna as a vibrant, well-rounded representation of women in their elder years, rather than the cackling crone archetype of so many fantasy stories.

The way things are going in both the book and television series, it’s entirely possible that wily Lady Olenna will outlast many younger favorites in the battle for the Iron Throne. Any Game of Thrones fan knows better than to bank on who will survive. But one thing’s certain: both the books and the television series are more rich and diverse for the inclusion of the Queen of Thorns, Lady Olenna of House Tyrell.

Shoshana Kessock is a game designer and writer who loves all things nerd-like. She is a contributing blogger to such sites as Tor.com and also writes for her own blog. As a game designer, she’s the co-creator of independent roleplaying game company Phoenix Outlaw Productions and is author of such live action role-playing games as Dresden Lives, Dangers Untold, and SERVICE. When she isn’t writing games or organizing Living Games, an academic conference dedicated to LARP, she’s working as a narrative designer and speaking around the world about games, games criticism, women in geekdom, and pop culture. She hails from Brooklyn, New York.