Why Kevin Conroy Is the BEST Batman | The Mary Sue

Why Kevin Conroy Is the BEST Batman

Or why I think he is. 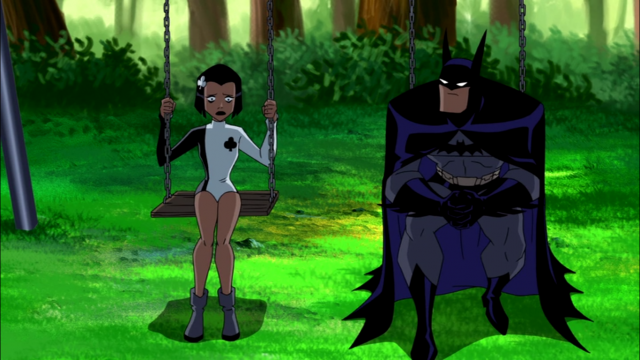 I know we’re all sick and tired of Batman v Superman talk. I’m resisting the urge to recoil even typing these words. I wrote three different articles about the film, and by the time I’d sent my third and final one in, I was ready to give up talking about it ever again.

Gotta love me some hyperbole.

Here’s the thing. As much as I detest the Zack Snyder catastrophe, I LOVE Batman and have for a very long time, but most of the appreciation has come through various cartoons I’ve watched. I’m one of those comic book fans who love the characters and worlds they’ve created but have picked up very few issues of the physical books, so my love for the hero stemmed from the small screen.

(Aside from Ms. Marvel, I haven’t picked one up in a very long time. It’s all so daunting that I have no idea where to begin. Help!)

What information I do have has come primarily from what I’ve either watched in television shows, movies, or have gleaned from the internet and fellow fans. But what I’ve known from the very start is that cartoon Batman is one of my favorite characters of the DC universe, right up there with Aqualad, Artemis, The Flash, Hawkgirl and John Stewart’s Green Lantern. From my first entry point of the animated Justice League to the further developed Justice League Unlimited, to discovering some of Batman Beyond years later and now, finally, wading through the titan series Batman: The Animated Series, he’s been a massively engaging figure.

While I’m not sure I’d say he’s the best Bruce Wayne (I genuinely think Christian Bale nailed that aspect of the caped crusader), Conroy, from his debut as the character to present day, understood the nuance of the Batman character more than any other future performer, so much so that his voice, to this fan and I’m sure plenty like me, is synonymous with the character.

His Batman voice isn’t obnoxious (looking to you, Bale):

This one seems rather self-explanatory, but after suffering through a handful of actors whisper-growling at me, it’s easy to miss the more simplistic approach Conroy took. The idea is that the bat suit alone has already made Batman into an imposing figure, and the harsh voice only manages to make it all seem a little sillier than the creators might have intended.

He brings a lightness, comedy even, to his voice work:

Outside of Bruce Wayne (sometimes not even), actors don’t often get to have much fun as Batman, especially as he’s further branded as being Super Serious. There are two episodes that immediately come to mind when this is brought up.

Justice League‘s “Only a Dream” and “This Little Piggy” are two of the best examples of writers getting the Batman character right by giving him equal measures heart, mystique, and wry humor as he’s left to his own devices to solve smaller-scale troubles. In “Only a Dream,” his main battle is to stay awake, and he goes through the typical motions that many of us learned in staying up while on the road (although I doubt he’d ever simply pull the Batmobile over). He demands an espresso filled coffee, punches through a window for cool, fresh air (because Batman would never demean himself by simply rolling it down like a normal person), and humming along to a jingle, what ends up being the cure to getting John Dee out of his head and saving the rest of his team from their vicious nightmares.

“This Little Piggy,” on the other hand, is one of the oddest episodes of the series, if not the most so, in its entire run. Wonder Woman, in a mishap, is turned into a pig, and Batman’s goal of the episode is to try to turn her back, enlisting Zatanna’s (!!!) help, because to he’s keeping his feelings for Dianna on the down low.

(Sidebar: I am forever ruined because there is no pairing in any respective Batman or Wonder Woman movie that will makes me as happy as Batman and Wonder Woman’s flirtation in the JLU. )

This leads to a whole lot of shenanigans for Batman, but my favorite is his crooning, soulful rendition of “Am I Blue?” which is easily the most surreal the show ever was while also being one of the more human moments for the character.

But also his full range of emotion:

Remember when he gets trapped in his parents’ grave in Justice League: Doom? Or when he thinks Wonder Woman has died under fallen rubble and desperately digs through it to try to find her? (My nostalgic heart!) Far from the self-serious, morose figure we’ve come to know, Conroy’s Batman has a heart, is doing what he thinks is best, and his pain comes off less like a plot motivator and more of a character layer. On top of the emotional level of depth given, he’s also presented as a character who could legitimately intimate villains into giving up or, in one case, carry a piece of kryptonite around with him as backup for whenever the need might arise.

Even his compassion in “Epilogue” demonstrates just how fleshed out this character is, a moment that defines Conroy’s Batman. 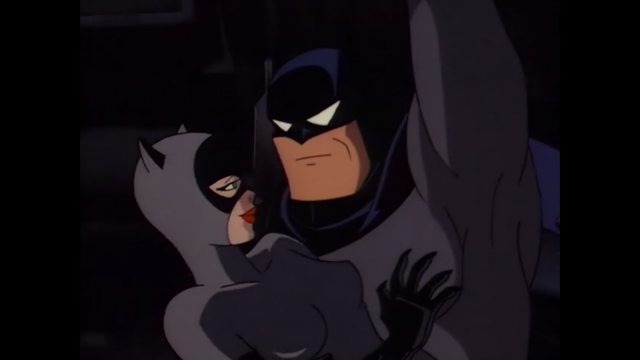 Conroy has been voicing this character on and off again beginning in 1992 and will reprise the role in the highly anticipated, upcoming The Killing Joke, which reunites him with Mark Hamill’s perfect Joker (in all honesty, I could have written this same article about him). No easy feat, this has required him to play with his vocal intonations, especially as series and animated films have brought varied versions of the Dark Knight to life. Batman: The Animated Series was strongly film-noir, imbuing the series with deep grays, lots of shading, crooked crooks, and femme fatales. It was a richly depicted world and one where Batman—up until what I’ve watched at least—is a bit of a clean slate. He doesn’t color his voice as much as he will later, playing more of the “straight man”—a calm, sturdy presence.

This also could be chalked up to the fact that it was his first outing with the character.

Compare that though to the animated film Justice League: Doom where he adopts a much gruffer, even dour, tone that corresponds with the overall tonality of the film, darker fare than the television shows. He’s been able to adapt how he vocalizes this character of the past two and a half decades, always making it fit with the mood of whatever story is being told while never losing the spirit of the character that he helped create (across this medium at least).

Justice League and Justice League Unlimited are the best examples of this, as he gets to arguably be his, for lack of a better word, animated. Sure, he’s far from cracking jokes, but it’s a livelier version of the character (as I mentioned when talking about the comedy), and I kind of wish that this was the version of Batman that would make it up on the big screen.

Forgive my nostalgia. There’s only so much I can read about the repulsive actions Jared Leto took to “get into character” (which, no) before I start yearning for older, no less complicated, less convoluted versions of these iconic characters.

I guess, in the end, this was all one giant, wordy way to ask you all who your favorite Batman was.

Bet you couldn’t guess mine …