Why Did I Hate "Twilight" So Much? | The Mary Sue

Why Did I Hate Twilight So Much?

Confessions of a Twilight hater.

Today, video essayist Lindsay Ellis returned to the internet with a video about looking back at the toxic levels of sexist and misogynist attitudes surrounding Twilight and series author Stephenie Meyer. It was a very insightful piece and struck a particular chord with me as someone who proudly slung that toxic level of vitriol. When I look back on Twilight, even with Ellis’s video in mind, there are a lot of things I stand by in disliking Twilight. However, thinking about it, I realize that there were some problems with the way I processed my hatred, too.

Entitlement to my special nerd thing:

Entitlement within nerd culture is a strange thing, and while it is usually something that comes up in conversations about male fans, when it comes to Twilight, it brought out a sense of entitlement within me towards horror and urban fantasy books. Growing up as a book-loving nerdy black girl, I did not have a lot of friends who loved books the same way I did, or the same types of books. Yes, Harry Potter was a constant, but I also read books about vampires, witches, and other magic. I remember getting comments about reading Anne Rice’s The Witching Hour just because it was such a large book. So when Twilight blew up and became unavoidably popular, it was a mixed feeling for me.

I read the book when it first came out. It was a Christmas gift, and I honestly do not remember my initial reaction to it when I first read it, but that speaks for itself. I hadn’t thought about it again until much later, when the series got more popular, around the Eclipse era.
When everyone around me started raving about it, I felt a twinge of bitterness. Now, as an adult, I recognize it as the same reaction that you often see in the sexist way some male comic book fans treat female comic books fans—as if they just arrived on the scene in a genre that you loved, ignoring that just because you didn’t see them doesn’t mean they didn’t exist. After so long of feeling like an outsider because I liked this weird thing, everyone else was now into the skim milk version of something I really enjoyed, and I still felt isolated.

Instead of ignoring it and just enjoying talking about other things, I talked more and more about Twilight. I got into arguments about Twilight because I wanted everyone to hate it as much as I did. Instead of … you know … doing anything else. I took pleasure in talking down to people about liking it, not even focusing on the legitimate issues, but just raging about how could you like this?

When you have a hyper-feminine name like Princess (and yes, that is my real name), it seems like you have two choices: embrace the girliness, or push it away as violently and quickly as possible. I chose the latter. I was a self-hating teenage girl, who gravitated towards “not-like-those-other-girls”-type characters. The more goth the clothing, the closer that character was to my heart. I listened to rock music and watched action movies. I embraced being a tomboy because, from what I had seen from the world around me, if I wore jeans, listened to the “right” music, and enjoyed the “right” things, it validated me.
And as Ellis points out in her video, we live in a society that hates teenage girls.
We find their hurt, their pain, their feelings to be obnoxious, and mediums that place too much attention and focus on them to be lesser—so much so that even as a teenager grappling with her own feelings of isolation, anxiety, and emerging queer feelings, I also rejected recognizing female angst. And yet, I was deeply in love with Interview with a Vampire, which is filled to the brim with angst! But it was the male angst that has always historically been treated as something deeper and more legitimate to craft a franchise around than female angst.
Twilight is poorly written, and that is what makes slinging so much criticism at it, founded and unfounded, so easy, but the fact that women liked it so much just somehow fed into this mentality that women are vapid and like vapid things. And I fed into it because I wanted to be the “right” kind of woman.
Thankfully, in college, I got that chip brushed off my shoulder Luke-style, and now I recognize that there is something really amazing about books and other kinds of media that do recognize the feelings young women go through. Does that make Twilight, or any other specific example, automatically good? No. But, there is something truthful there.

Did I really hate Twilight? 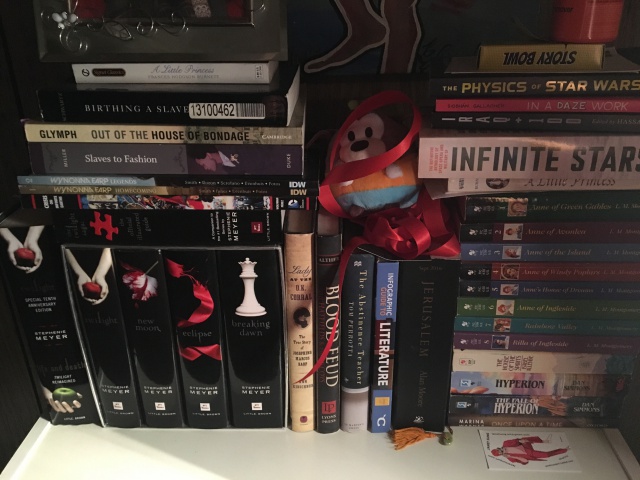 My humble bookshelf … yes I do have multiple copies of A Little Princess don’t @ me.

Like many women of my generation, I grew up writing fanfiction. I only wrote fanfiction for three fandoms, and the fandom I wrote the most fanfiction for was Twilight. As the provided receipts above show, I have the entire series (sans Bree Tanner because that was a hard swerve), including the Twilight encyclopedia and the 10th Edition Twilight gender-bender release.

So now I have to ask myself, did I really hate Twilight? Well, yes and no.

Yes, in the fact that I found the franchise obnoxious, and there were things about it in terms of how it turned women into monsters for not being able to have children, and the undercurrents of emotional manipulation that existed—not to mention almost everything in Breaking Dawn is legitimately bad. Imprinting?

Anyway, taking everything into consideration and recognizing that there was a film of internalized sexism over the lens through which I viewed the series, I can say that while I don’t think Twilight was good, I also know now that there’s another reason people delight in tearing it down.

I’ve read a lot of trashy vampire fiction—many of them with more cheese than the most “hold on spider monkey”-est part of the series. I read Vampire Academy, which had a problematic student-teacher relationship and a lot of emotionally abusive bits towards the end. I watched so many seasons of True Blood, The Vampire Diaries, and many other things that had many of the same themes and elements of Twilight, but done better—or at least more interesting to me.

While it’s worth talking about how Twilight did begin a trend that got worse and worse with every single new iteration, that is no different than what has happened to other books when they hit mass popularity. The “damage” Twilight was projected to be for young women was a somewhat legitimate concern, but we also didn’t give women enough credit.

What is the difference between Twilight moms who turn their bedrooms into shrines for Edward and Bella, and dads who do the same thing for Star Wars, Star Trek, or any other male-targeted franchise? The difference is that we have assumed that one has more value, even at its weakest points, than the other.

The fact that we thought that Twilight was the worst thing to happen to science-fiction/fantasy when Ready Player One exists is … yeah.

There are so many male authors who have done more damage to concepts of masculinity than Stephenie Meyer ever did to femininity. So while we should discuss the sexist, racist, and problematic themes in Twilight, dragging down women with it is neither necessary nor productive—especially considering all of the other things we give a pass to because the way they write sexism/racism is … better (coughOutlandercough).

For the record, I feel like if you have any doubts about the kinda screwed up ways Meyer views gender, just read her gender-swapped Life and Death: Twilight Reimagined version of every female character from Twilight.

Justice for Rosalie Hale and Leah Clearwater forever though.